This last week an entirely new format was introduced to Arena. It’s called Alchemy and it is a digital-only format that can only be played on Arena, similar to Historic. However, unlike Historic which is an “eternal” format, Alchemy is closely tied to Standard. Essentially, Alchemy is a rebalanced Standard that includes cards that have been tweaked (nerfed) to change their power level, as well as some brand new cards that don’t exist in paper Magic. 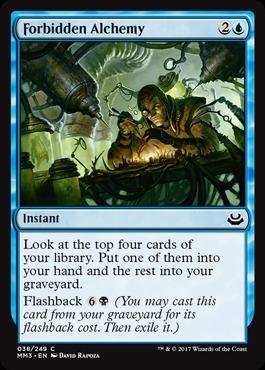 What would Standard look like if Alrund’s Epiphany always cost seven mana, even when foretold? What if Luminarch Aspirant and Esika’s Chariot weren’t quite as dominating? Alchemy looks to answer these questions and create a more balanced format that can be micromanaged as time goes on. However, this effort also comes with problems of its own. For example, how do collections handle having two different versions of the same card – the original one for Standard and the tweaked one for Alchemy? For the time being, Arena has ensured that all players have playsets of the cards that have been digitally updated – such as Faceless Haven and Goldspan Dragon – and that these cards are specially marked. Whether this will continue as more cards are affected is yet to be seen. As well, with more digital-only cards coming to Arena, the question of whether or not Arena will even still resemble paper Magic arises. Alchemy is certainly pushing in a direction that more resembles competing card games such as Hearthstone and Legends of Runeterra. It is very difficult to ascertain what the future of Arena may look like, with new changes being made all too often. For now, all we can do is sit, wait, and play what we have been given. So far, Alchemy hasn’t felt too bizarre. The parallels with Standard are still strong, although the metagame certainly seems different. The hardest part to get used to has been using tweaked versions of existing cards; it’s quite difficult to keep in mind that Luminarch Aspirant triggers at the end of your turn now, for example. To get started in the format I just used the nerfed version of my Mono-White Aggro deck from Standard, because I didn’t want to spend any wildcards on a wild format. However, since then, one archetype impressed me enough to try it out. Mono-Black sacrifice has been close to playable in Standard but was a little underpowered and also oppressed by the speed of Aggro and the game-stealing power of Alrund’s Epiphany. Now though, with the additions of Sanguine Brushstroke and Cursebound Witch, the deck is really solid. Not only that, it is very fun to play as well, as it’s always a puzzle to try and take your opponent’s life down the fastest with a combination of attacking and triggers from a variety of sources like The Meathook Massacre and Blood Artist.

With 12 one-drops that provide value when they die and plenty of ways to sacrifice them for even more value, this entire deck is a powerful engine. There are many games where I have a full or overflowing hand well into the late game thanks to all the drawing, learning, and conjuring. A good sign for engine decks is that they always have something to spend their mana on, and that is almost always the case here. Faceless Haven and Warlock Class also provide great uses for mana if you don’t want to cast anything. Getting to make so many decisions each turn is always quite exciting. Aside from my personal favourite, a few other decks have also impressed early in the format. White-based party decks using Angel of Unity and Inquisitor Captain have been very powerful and feel a lot like the Selesnya Company decks that quickly filled up the board with fearsome creatures. Because Angel of Unity matches up so well against all of Mono-Black’s small creatures, this deck has been my toughest opponent. If you’re looking to go a controlling route, Azorius and Jeskai Control with Key to the Archive are both exciting options that take advantage of new cards. Key to the Archive specifically is a great way to ramp up to Hullbreaker Horror, and it also combos great with Teferi, Who Slows the Sunset.

Despite the fact that not everyone is pleased with the direction that Wizards of the Coast has taken with Alchemy – myself included – it is still a fairly fun format so far. As well, if you have your eye on the Arena Decathlon event which is coming up soon it may be a format worth practicing, as it is one of the 10 formats involved. I can only imagine what the format will look like as time goes on…