Collected Company is one of my all time favourite cards, and when new decks using it do well I take notice. Although I haven’t been playing Historic as much as I used to, when I heard that Heliod Company is one of the top decks these days I knew I had to give it a try. Considering its recent results it came as no surprise to me that the deck is not only fun, but also quite powerful! 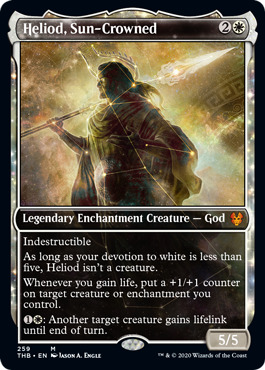 The deck closely resembles Heliod decks from Modern, and even has an infinite combo. Walking Ballista, which can deal infinite damage when given lifelink by Heliod, Sun-Crowned is banned in Historic. In its place, Scurry Oak from Modern Horizons provides a similar combo with Heliod that creates infinite life and squirrel tokens. With Scurry Oak, Heliod, and a creature like Soul Warden in play, each creature entering the battlefield gains life, which allows Heliod to place a counter on Scurry Oak, which creates a new squirrel token and repeats the process. 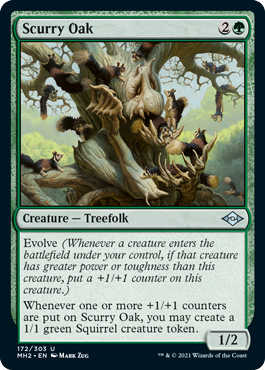 The rest of the deck is built around this central combo, with a strong focus on life-gain synergies. Soul Warden, Lunarch Veteran, and Prosperous Innkeeper all act as part of the combo and help stall against aggro opponents. Trelasarra, Moon Dancer and Voice of the Blessed are strong two drops that can get big quickly and pressure opponents, providing a good alternate win condition for the deck. Skyclave Apparition is what most Heliod decks use for removal. Lastly, Collected Company provides extra consistency and speed, often bringing the combo together on turn four if it resolves. 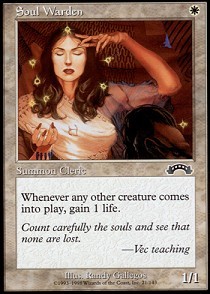 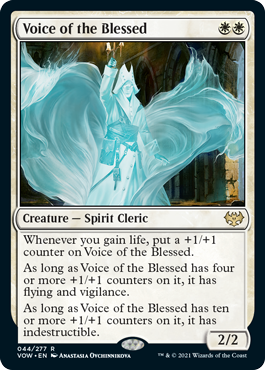 There are a few versions of Heliod Company at the moment, with some different card choices and focuses. The list that I have decided to play and share is dead simple. Since this is a combo deck I have focused on consistency and streamlining the gameplan. Full playsets of the three creatures that gain life when creatures enter the battlefield mean that you can almost always have at least one of them on the battlefield. Trelasarra, Voice of the Blessed, and Skyclave Apparition are the only cards included that don’t act as part of the combo.

The sideboard for my list includes Thalia, Guardian of Thraben to slow down Izzet Phoenix and Yasharn, Implacable Earth to thwart Jund Food decks. Rest in Peace is helpful in these matchups as well, and is also vital for matches against Rakdos Arcanist and graveyard combo decks. Conclave Tribunal can be used to remove troublesome permanents such as planeswalkers and creatures like Hushbringer. 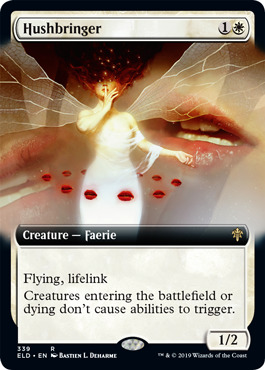 If you’re looking for a more spicy version of the deck, consider playing it with Yorion, Sky Nomad as a companion. I have seen a few players using a deck that combines Heliod Company with a Bant Blink archetype that includes cards such as Soulherder and Charming Prince. Although these themes do not directly synergize, the blinking does provide another angle that can be used to gain board advantage and card advantage. This can be especially useful if your opponent has ways to deal with infinite creatures and infinite life. For example, Azorious control decks can simply play a board wipe and win with Teferi, Hero of Dominaria. However, they may be vulnerable to the recurring card advantage provided by a combo like Yorion, Charming Prince, and Wall of Blossoms. 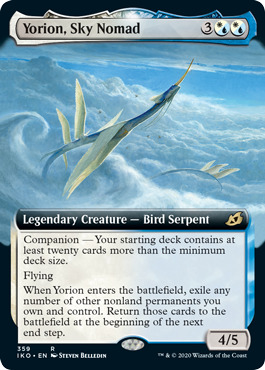 When playing my version of the deck, the strategy is fairly clear. The key is just assembling all three combo pieces. In most situations this is much more important than building a board presence or gaining advantage in other ways. For example, if I have to choose between playing a Voice of the Blessed or a Lunarch Veteran on turn two, I will play the Veteran even though it is less mana efficient. I will also almost always play a Scurry Oak or a Heliod, Sun-Crowned over a Skyclave Apparition. The only games where this isn’t true is when the infinite combo isn’t an automatic win. As far as I have experienced, the only decks that can beat infinite life and squirrels are Blue-White based control decks as I mentioned above, as well as opposing Heliod Company decks.

Against control, try and force them to use a board wipe on your two drop creatures, and then play the combo all at once when you have enough mana. Unless they can find another board wipe the next turn they will be dead. Against other Heliod Company decks, the key is often resilience. With most Heliod decks only using Skyclave Apparition as removal, disruption is rare. Make sure to save your Skyclave Apparitions for their Heliods, at all costs. Similarly to playing against control, the best strategy may be to play all your combo pieces in one turn without giving them a chance to disrupt you.

The main drawback to this deck in my experience has not been a matter of strategy, but actually just an issue with Arena itself. Because a combo technically can’t go infinitely, you have to actually just repeat the combo a very large number of times in order to execute it. Although most opponents will concede when they see you have assembled the combo, you will sometimes have to actually manually produce huge amounts of squirrel tokens. This means minutes of clicking, while your opponent is forced to sit by and watch. It can be tedious, but if you’re patient or maybe listen to some music while playing then it is still worth playing the deck.

Playing Heliod Company has renewed my interest in Historic heading into the new year. The deck has reminded me that interesting archetypes can always rise to the top of the metagame, even if Sacrifice and Control will always be somewhere near the top too. Hopefully Historic continues to evolve and provide a fun and rich play experience in 2022!