Historic is a growing format that includes every card released on Arena, but at its core it is still the format where cards can live on even after they rotate out of Standard. However, not every card that has made an impact on Standard has been able to find a place in Historic. There are some cards that were dominant in their day but haven’t seen play in the more powerful format. But, their chance may be coming. With the recent ban of Brainstorm, Historic has been shaken up, and now may be the time for new archetypes to break into the metagame. Below I’ll be looking at some of the most powerful cards that don’t currently see play in Historic, and could get their chance very soon.

This strange four-mana instant from Kaladesh is a staple in Vintage but was also briefly used in Standard. Paradoxical Outcome is used to bounce a handful of artifacts, draw a ton of cards, and create crazy storm turns. It works best when paired with Inspiring Statuary and cheap artifacts, so it can be cast for free. In Standard, Paradoxical Outcome decks won with Aetherflux Reservoir. In Historic there are even more options for Storm decks, such as Grapeshot and Mind’s Desire, but Reservoir may still be the best option. Paradoxical Outcome may be a little underpowered at the moment, but any new, cheap artifacts entering the format could change that. A combo deck that can attack a format from an entirely unexpected angle is always a threat.

This three-drop was the best card in Mono-White Aggro decks in Standard back in the day. At Pro Tour Guilds of Ravnica in 2018, there were 20 copies of the card in the top eight decklists. The Marshal is clearly a strong card, but it also only fits into white weenie decks and so it relies on the creatures around it as well. There are some good white creatures in Historic such as Adanto Vanguard and Luminarch Aspirant but there is a lack of impressive one-drops. Combine that with the fact that scary sweepers such as Wrath of God and Extinction Event are commonly played, and things look tough for Weenie decks right now. However, the archetype is still powerful and if the metagame opens up a little I believe that Benalish Marshal will see the light of day once again.

Glorybringer was often called the best card in Standard in the years following Amonkhet, and that certainly felt true whenever it was cast against you. This large hasty dragon is always impactful, but when it was played and immediately used to kill a creature it was usually game-ending. In Standard, Glorybringer was played in every red aggressive and midrange deck. It could also be played in the sideboards of control decks. These days I think Glorybringer could still fit into any kind of deck. Because of its effectiveness against opposing creature decks, I am surprised it doesn’t already see more play in sideboards. However, if Glorybringer is going to be a truly important card in Historic it will need the right deck to fit into, which may be where its Dragon creature type comes in. There are many Dragon support cards in Historic, such as the new Orb of Dragonkind. I think a deck built around Goldspan Dragon, Glorybringer, and other powerful Dragons could likely find a place in Historic. It’s just a matter of time.

Obsession is a personal favourite of mine from Standard, where it led Mono-Blue Tempo decks to great results. Combined with unblockable creatures, counterspells, and Tempest Djinn, Curious Obsession made control decks look silly and often had just enough board control to race aggro decks. It was a difficult deck to play at times but the games were often very exciting. The games that weren’t exciting were always the result of a Curious Obsession being played on turn two and running away with the game. In Historic, the card Curiosity can be used as a few extra copies of Curious Obsession, making it even better to build around. Obsession’s old partners in crime, Slither Blade and Mist-Cloaked Herald, are also in the format and ready to draw cards. If control decks or aggro decks without removal ever become prevalent, mono-blue will be perfectly positioned to start stealing games of Magic once again. 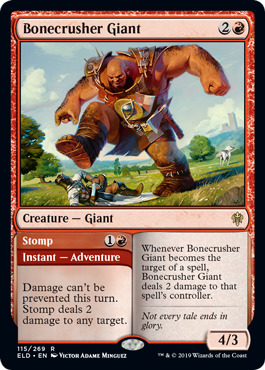 Bonecrusher Giant is another card that has been absolutely dominant in Standard. The brutal two-for-one package often creates an edge, and the card is versatile enough that it is never a bad draw. However, the not-so-friendly giant is barely played at all in Historic right now. My guess as to why is that there are no red decks in Historic that don’t have a very specific gameplan. Bonecrusher Giant fits best into midrange strategies, so if any red decks arise that aren’t all in on themes like sacrifice or Arclight Phoenix then the giant should see play. I think the metagame is already a good fit for the card, since Stomp is great against decks like Sacrifice, Auras, and Gruul. Bonecrusher Giant is so powerful that it will undoubtedly find a place in Historic at some point.

It’s certainly fun to talk about all the cards and decks that are dominating a format at any given time, but sometimes it can be more interesting to look at the cards sitting just outside the metagame. Each of these cards have proven themselves to be powerful, now it’s simply a matter of finding the right archetypes or metagames for them to fit into. I hope you enjoyed this look at the sidelines, and at the potential future for Historic!