Kamigawa: Neon Dynasty has given Standard a breath of life, creating a number of new archetypes. This week I have been playing a deck that seems like it might be the cream of this new crop, which it has been proving in a number of recent Standard tournaments. If you have been paying attention to the top 8’s of those tournaments, you’ll know that I am referring to Naya Runes.

For the most part, the core of this deck is the exact same as the Selesnya Enchantment decks I have been playing previously. Generous Visitor, Jukai Naturalist, and Kami of Transience are an excellent team and this definitely won’t be the last Standard deck they enable. What makes this deck special is the addition of Runeforge Champion. The runes from Kaldheim are great for enchantment-based decks because they draw a card when they enter, meaning that you can draw more enchantments and continue fueling cards like Generous Visitor. 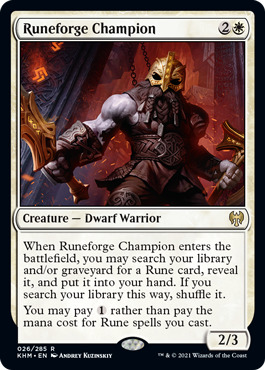 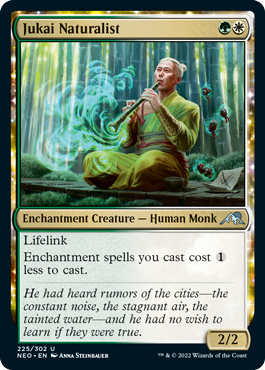 The interaction that makes this deck so potent is the combo of Runeforge Champion and Jukai Naturalist. When both of them are on the battlefield, runes cost no mana to cast! This can lead to crazy turns where you cast however many runes you can draw, often chaining them into each other. The runes can trigger Generous Visitor and Kami of Transience to create a huge board presence, and also provide bonuses themselves. Haste, Trample, and Lifelink are all very relevant abilities, and when they are applied to large creatures they often win games. 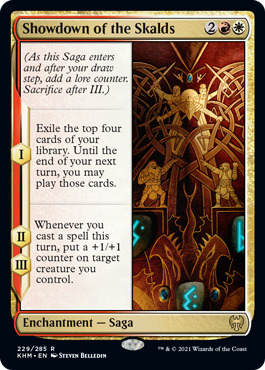 In most games this deck plays like a fast aggro deck, where you are trying to swing for as much damage as you can as fast as possible. Turn one Generous Visitor, turn two Jukai Naturalist, and turn three Runeforge Mystic into a bunch of runes is the quickest route to victory this deck has. However, sometimes you won’t have the right hand for this quick start and you have to adapt a midrange strategy where you try and build resources and then overwhelm your opponents defenses. This is where Showdown of the Skalds shines. The four-mana saga has proven itself as a great top-end for aggro decks in Standard before, but this might be the best home for it yet. The fact that it is an enchantment makes it very synergistic with the deck, and it is often not hard to cast all of the cards it provides because there are so many cheap spells in this deck. The counters that the saga provides stack nicely with the counters from Generous Visitor and help the deck create massive creatures that almost always outgrow your opponents’ side of the board.

One element of the deck that I think could still use some tuning is the removal. The two copies of Touch the Spirit Realm currently in the deck are a good answer for any creature, and for artifacts like Oni-Cult Anvil. However, I still haven’t used its channel ability once, and this ability is its only upside over Borrowed Time from Midnight Hunt. If I continue to find that I would rather have a removal spell that can also remove enchantments and planeswalkers then I will likely be replacing Touch the Spirit Realm. Circle of Confinement is also a super efficient answer for creatures, but because Izzet Control decks are so prevalent I don’t think it is worth main-decking right now. 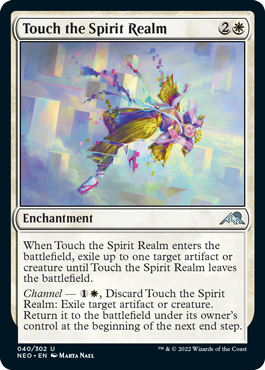 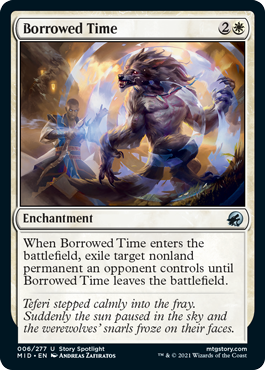 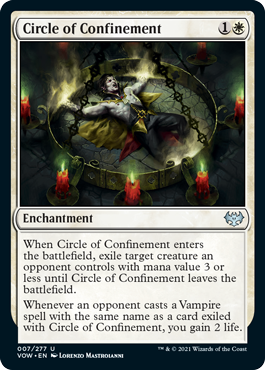 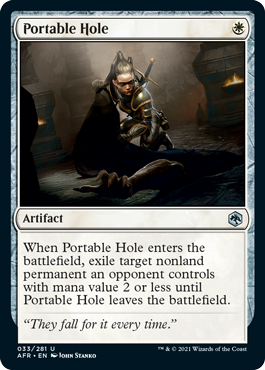 The sideboard for this deck is relatively simple. Paladin Class and Wedding Announcement can be brought in to annoy control decks with their resilient ability to provide value. Tamiyo’s Safekeeping can be used to protect your threats against decks with good removal and board wipes. Portable Hole and Circle of Confinement provide cheap answers to cheap aggro threats. Dawnbringer Cleric and Valorous Stance are more versatile but mostly act as excellent answers to Wedding Announcement and Goldspan Dragon, respectively.

Naya Runes is a promising and exciting new deck. Any time that you can chain together multiple spells for zero mana in Standard it is likely going to be very powerful, if not broken. Another great reason to try this deck is that it is fairly low-budget. On Arena it doesn’t require very many rare and mythic wildcards because so much of it is made from commons, and in paper it is also quite affordable. Although there are a number of other powerful decks in Standard right now, it appears that Runes and similar enchantment decks have solidified themselves as a part of the metagame.