Ponza. You either love it or you hate it. Or perhaps you sometimes hate it and sometimes love it, depending on which side of the table its on. There aren’t many decks in MTG quite as divisive as this one, but below I will be diving in to my very own Ponza brew for the modern age of Magic: The Gathering.

Ponza, in case you didn’t know, refers to decks focused on destroying opponent’s lands. They are often red and/or green in colour and have varied in popularity over the years. The most prolific Ponza deck of Magic’s history is probably Modern Gruul Ponza, which has terrorized Tron players for years. Why is it called Ponza, you ask? Well, Brian Kowal invented the first Ponza deck in the late 90s, and he was a big fan of a dish from a nearby pizzeria called the Ponza Rotta. Essentially a deep-fried calzone, Kowal likened the dish to his deck by emphasizing that they both have a perfect balance of crust (lands), meat (creatures), veggies (ramp), and that delicious red sauce (the land destruction). The term stuck, and now over two decades later we still refer to red land destruction decks and Ponza decks. 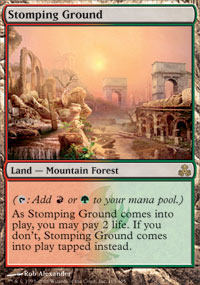 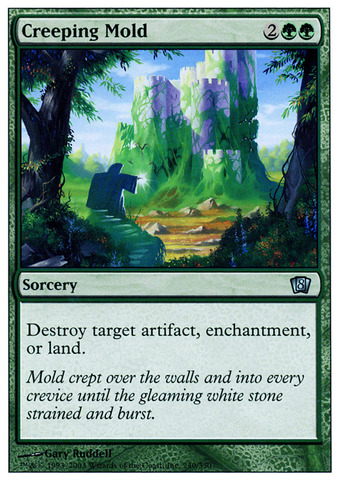 Since their creation, Ponza decks have earned a bad reputation. There is something so brutal about having your lands destroyed, and playing against a deck devoted to that purpose can be enraging. Having to stare at a hand full of cards you can’t cast is awful. Waiting to draw a land  and playing it, only to have it be destroyed before you even get to use it is awful. Watching your opponent hit their sixth and seventh land drop while you are making your third land drop for the fourth time is awful. Getting to watch your opponent go through all these things is pure joy. Screenshot of the second game I played while testing this deck for the article, where an opponent rage-quit after I destroyed their first two lands and decided it was best to spend the next five minutes letting their timer run out instead of conceding! This is far from the only time this happened.

I have been playing Ponza on Arena for a long time, and I am excited to finally be sharing my list. While this deck isn’t tier one, and probably never will be, it is still quite powerful. More importantly, it is very satisfying. That is, if making random online opponents extremely frustrated is satisfying for you. 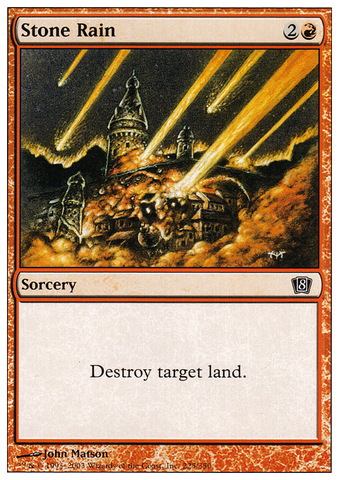 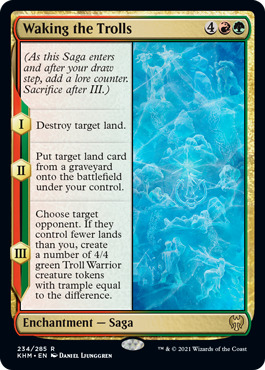 I originally decided to build the deck thanks to two key cards. Firstly, Stone Rain (which came to Arena thanks to Strixhaven’s Mystical Archive) which is a classic Ponza card. Three mana to blow up an opponent’s land is a very reasonable rate, especially when paired with ramp spells. Stone Rain makes it so Ponza decks can keep up with other fast strategies. The second card that really motivated me to build the deck was Waking the Trolls. This six-mana saga from Kaldheim is like a Ponza build-around card, as it both helps you destroy lands and also pays you off for doing so. While it is an expensive and slow card, it is also one of the most fun game-enders I have ever had the pleasure of playing. Plus, the fact that it literally summons a handful of trolls is too good. Whoever designed this card knew what they were doing.

Starting from these two cards I built the deck using the same template that Ponza decks have used for decades, building the perfectly balanced calzone, so to speak. 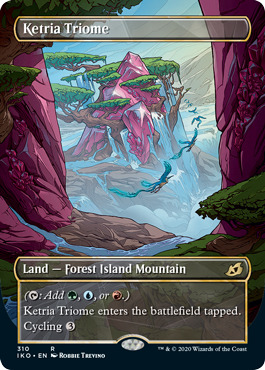 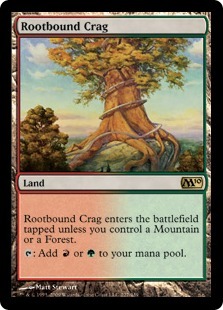 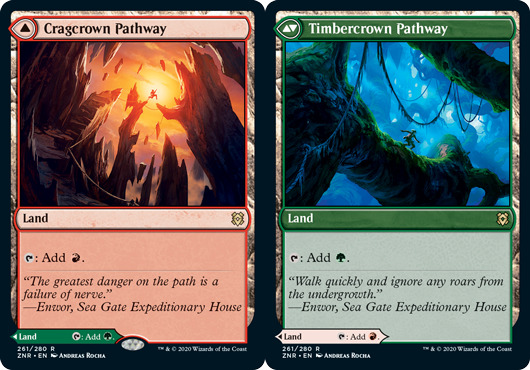 The lands are quite simple, just like a calzone crust!

I didn’t go too heavy on the meat this time around, but I did include some premium choices. Bonecrusher Giant does double duty as this deck’s best removal, while Llanowar Elves can power some truly incredible openings. A singleton copy of Glorybringer is an homage to the Modern version of this deck and it often swings games when played. 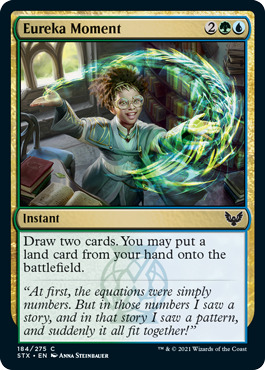 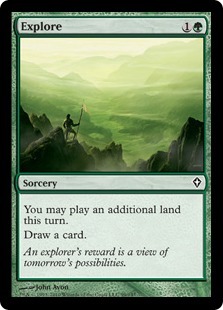 This deck obediently eats its vegetables, with a strong corps of ramp spells. With a decent hand this deck can get up to six mana by turn four! 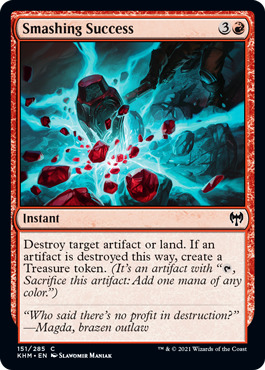 Lastly, the delicious sauce. Stone Rain provides a first taste to opponents, Creeping Mold and Smashing Success continue to delight all game long, and Waking the Trolls provides the dessert. Destroying an opponent’s land, stealing it from their graveyard, and then filling the battlefield with trolls, what more can you ask for from a card?

The only other ingredients in the deck are a single copy of Chandra, Torch of Defiance for value, and two copies of Anger of the Gods to help out against aggro. Ponza naturally has very polarized matchups. Ponza often performs well against decks that need their lands like control and midrange decks with expensive cards, because it can keep them casting their spells. However, aggro decks often only need two lands or so to achieve their strategy, and they can also start pressuring Ponza before it even starts destroying lands. Luckily Bonecrusher Giant and Anger of the Gods can help out in these matchups and hopefully slow them down enough for Waking the Trolls to be relevant.

I hope you are able to put this deck together and try it out, because there is truly no experience quite like playing Ponza. Even though land destruction hasn’t been a prominent strategy in a long time, it will always be a part of the game. Four mana land destruction spells like  Rubble Reading and Smashing Success are still printed often, for no discernible reason. I think it is just to add something unique to the game, so that everyone can find something they love to play – even the sociapaths. Happy pillaging!