Innistrad: Midnight Hunt is coming out in paper this weekend and has already been out on Arena for a week now, so it seems like the perfect time to take a look at the top cards from the new set! I will be going through a selection of the top five cards based on their potential in competitive constructed formats, in order to help you know which cards to collect and what to start brewing with. 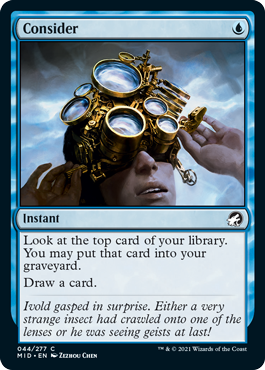 Cantrips are almost always some of the most recognizable cards in Magic. Cards like Brainstorm, Ponder, Serum Visions, and Opt are all played in various formats and show up in all sorts of decks. Each of them has been ubiquitous for years. However, it has been a long time since a new cantrip has entered the scene. After years of Opt reprints in Standard, Consider is finally coming to shake things up, and it happens to be a direct upgrade to Opt as well. In any deck that can take advantage of its graveyard whatsoever, Consider will be able to help fuel the graveyard while also providing card selection. If you’re not already thinking it, it should be pointed out that this card is going to be best friends with Arclight Phoenix.

Because it provides card selection as well as graveyard fuel, Consider is likely better than Thought Scour in most situations. With all of the decks that utilize the graveyard in Modern, there is a good chance it can find a home there. With Brainstorm banned in Historic it seems that Consider will be the de facto best cantrip available. It has been a long time since an exciting new cantrip has been printed, and I have to say I’m excited for the thousands of times I’m going to cast this. 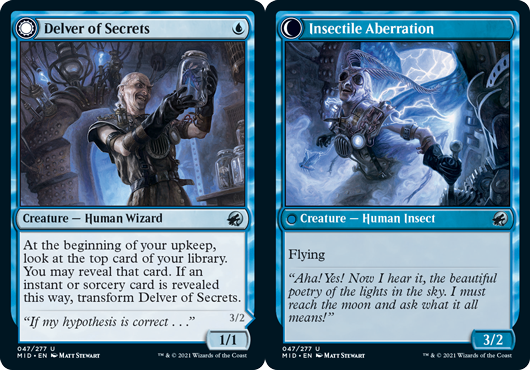 As someone who loves tempo decks, Delver of Secrets is a card that has always had a special place in my heart. Although I have had limited opportunities to play Legacy I have thoroughly enjoyed every game I had with Ux Delver decks and I am hoping that blue’s most famous one-drop will now find a home in newer formats. Although it will likely be difficult to build the appropriate deck for Delver of Secrets in Standard, Historic seems like it may be a great fit for the card. There are plenty of cheap spells to fill a deck with, and a number of cards to support tempo strategies. While removal is more common than it is in Legacy and we don’t have Brainstorm to play with it, a threatening one-drop is still a scary addition to blue’s capabilities.

Delver of Secrets also potentially works well with Curious Obsession and it seems like building a blue tempo deck might be on the table in Historic once again. With Archmage’s Charm in the format now there is great incentive to just play Islands, and it won’t be too hard for these decks to play enough spells for Delver. On the other hand, it might be best to go Dimir to play Thoughtseizes and Fatal Push or to go Izzet and play Dragon’s Rage Channeler and burn spells. Whichever shell its in, Delver of Secrets has hopefully just found a new format to call home.

This new version of “Wrenn and friends” didn’t look special to me at first glance but I am starting to think it may be one of the very best cards in the set. In a vacuum, Wrenn and Seven is OK. It will provide a lot of lands, potentially some ramp, and of course it can give you board presence with its minus three ability providing a token that will usually be at least a 5/5. Where Wrenn and Seven really shines is in decks with great mana sinks or the ability to take advantage of hands full of lands. With the rotation in Standard it is possible that the Landfall cards from Zendikar Rising will play a bigger role in the format and many of them pair great with this new planeswalker. For example, Scute Swarm can go off when you consistently have access to a land every turn in the late game.

Wrenn and Seven has already put up terrific early results in Standard, with 16 copies of it showing up in the top 8 decks at the recent Hooglandia Standard Open. It was played in a variety of decks including midrange Selesnya, Gruul, Simic, and Jund as well as Mono-Green Aggro. From what we have seen so far, Wrenn and Seven could potentially be the most impactful card in Midnight Hunt. 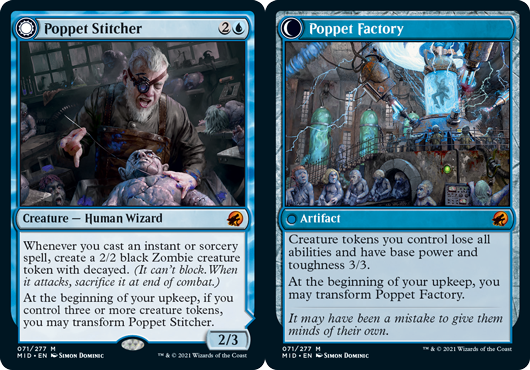 Blue is finally gaining access to a solid creature that is cut from the same cloth as Young Pyromancer, Monastery Mentor, and Sedgemoor Witch. Poppet Stitcher is the cheapest blue creature with an ability like this and it looks like it could have a lot of potential. Although it may not look as powerful as Young Pyromancer on paper, Poppet Stitcher is in a colour that has access to even more powerful instants and sorceries to pair with it.

Poppet Stitcher will lead to some interesting play patterns thanks to its ability to flip into Poppet Factory. Once it has made a few tokens the Stitcher can flip and “activate” them, making them much more potent as 3/3s that don’t have the decayed ability. As well, once it is flipped, Poppet Stitcher isn’t susceptible to creature removal which may be a big plus. This is especially true in formats without much artifact hate, which seems to be true of both Standard and Historic at the moment. The Stitcher could see play in a variety of decks but the first place I want to try it is in control sideboards. In Jeskai Control in Historic I could see it doing a lot of damage when opponents take out their removal and you are casting cards like Expressive Iteration, Lightning Helix, and Memory Lapse.

Four-mana blue instants that draw cards are a classic, and Memory Deluge looks like a promising addition to this family. Getting to see the top four cards of your library and picking two is a good upgrade over “scry two, draw two” which is what we often see. This alone makes it interesting in Standard but the added ability of Flashback for seven mana is very exciting. Having your draw spell come back later when a game slows down and drawing two great new cards is incredible, especially at instant speed. With Emergent Ultimatum out of the format late-games in Standard will look fairly different and Memory Deluge might be a card that pops up a lot in Blue decks looking to go long. Deluge might be a little slow for Historic but there is also a chance it finds a home there in a control deck or ramp deck looking for a lot of card advantage.

There is still a long way to go in discovering the potential for all the cards from Innistrad: Midnight Hunt, but from an early look it certainly seems like a promising set with a handful of cards that can affect multiple formats. Notably, most of the cards on this top five list are blue, which may have an effect on the Standard and Historic metagames. Although Standard will likely have a good balance (depending on how things shake out during this rotation), Historic was already leaning towards blue decks and this new set may only deepen that problem. Even with the recent ban of Brainstorm, Historic may need further action to help bring other colours up to speed with blue, although it is too soon to tell for certain. In any case, I know the cards I will be looking to open in my booster packs in both Arena and paper. Navigating the formats affected by Midnight Hunt is sure to be an exciting puzzle in the weeks to come.