It is officially the most exciting part of every season, as a brand new Magic set is finally here! Streets of New Capenna looks very interesting, both in its theme and the new cards its bringing. The set is focused on five families (which use the shard colour combinations) that are rivals in a 1920’s mob-inspired cityscape – New Capenna. Our first chance to play with the set will be in-store prereleases, which is a change from the last few years when Arena always released sets a few days before prerelease weekend. Arena had this privilege even before the pandemic, so this change might be a sign of MTG’s renewed focus on in-person play!

Now, in case you haven’t been keeping up with the word on the street, I’m here to catch you up on all the spoilers you need to know about. I’ll be taking a look at the top spoiler from each of Capenna’s five families, as well as one honourable mention that doesn’t quite fit into a specific group. 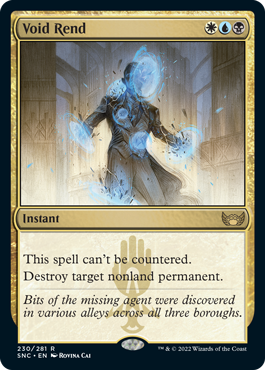 The Obscura family is bringing some heat to the table with this catch-all removal spell. Void Rend is an exciting instant, especially for Esper Control players who have been looking for a versatile answer to a variety of threats. In Standard this will be a good answer for everything from Goldspan Dragon to Esika’s Chariot to The Wandering Emperor.

The one downside to this top Obscura card is its mana cost. Three mana is a bit much for a removal spell these days, especially if this is mostly just going to be used for creatures. Needing three different colours will be a problem as well, especially in Standard where the dual lands are not particularly amazing. Void Rend will definitely make an impact in Standard, but thanks to the existence of options like Vanishing Verse I don’t think it will be used as Esper’s main removal spell. However, it also has the chance to impact older formats as well, since a spell that can deal with any nonland permanent is always welcome. 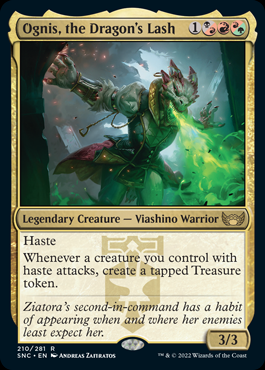 Ognis, the Dragon’s Lash looks more like an interesting EDH commander than a competitive aggro card at first glance. However, this may be an amazing four drop for aggressive red decks in Standard. If you ignore the hybrid mana, Ognis actually has the same mana cost as Torbran, Thane of Red Fell, which made a big mark on Standard. Ognis will provide extra mana after it is cast which could also make it ideal for “big red” decks. I think the biggest perk that will make this warrior relevant in Standard is its interaction with Goldspan Dragon. Ognis allows Goldspan Dragon to make two treasures on every attack, and the dragon will make all of Ognis’s treasures twice as potent, potentially providing access to huge amounts of mana. 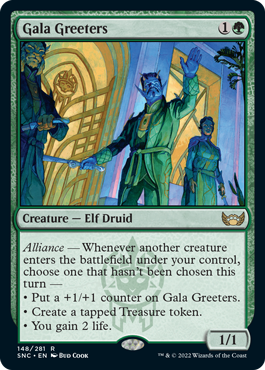 Gala Greeters may not be the flashiest rare in the set, but I think that it could potentially bring a lot to green decks in Standard. Gala Greeters is somewhat like a combination of Prosperous Innkeeper and Kami of Transience, both cards that have recently been successful in Standard. The fact that Gala Greeters can only do each of its abilities once a turn limits its combo potential, but most decks won’t be able to play more than one or two creatures a turn anyway. In return, Gala Greeters offers a lot of versatility, with the ability to provide mana, life, or power depending on the situation.

Gala Greeters isn’t too amazing in the early turns of a game, but over the course of an entire game it can make a big difference. If this elf ends up providing some life and mana every game while also continually growing in size it will be well worth the two mana. I could also see the treasures it provides being very useful in Temur Midrange, where it will also pair well with Goldspan Dragon. Between this card and Ognis, the Dragon’s Lash, Streets of New Capenna may also breathe life into a new treasure-based deck. 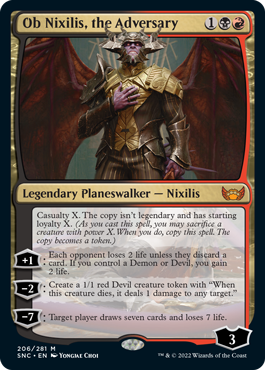 Ob Nixilis, the Adversary could technically go into Maestro decks or Riveteer decks, but I think his use of the Casualty mechanic from the Maestros makes his family allegiance clear. Ob Nixilis is one of the most powerful three-mana planeswalkers we have seen in a little while, and he is almost certain to make some sort of impact on Standard. Assuming you have a creature to sacrifice when you play him, Ob Nixilis will immediately provide two planeswalkers for the price of one, and each of them will be able to start draining opponent’s life totals. Unless they can deal with both copies of him, his ultimate will eventually provide a huge advantage in the late game. 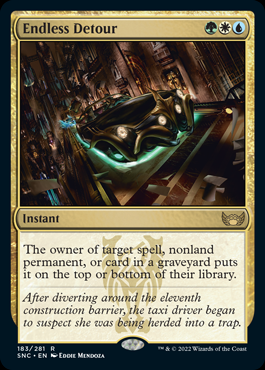 Last up, we have the Brokers and their new spell, Endless Detour. I think this card doesn’t have as much of a sure shot of impacting Standard as the other cards on this list, but I also think it might have the most upside. While it’s difficult to imagine a reactive card with three colours in its mana cost getting banned, I could definitely see Endless Detour becoming an incredibly potent and frustrating answer. Aether Gust – which was an amazing spell in Standard and beyond even though it could only target Green and Red cards – is the most obvious comparison for Endless Detour. One card being able to answer any creature, spell, permanent, or even a card in a graveyard at instant speed is unprecedented!

The one thing holding this card back is that there isn’t a great home for it right now. There aren’t any Bant decks in Standard right now, and I can’t think of any existing decks in Historic or Modern that this could help either. If a deck that is able to take advantage of Endless Detour does rise to prominence, I think that it will be extremely powerful.

Honourable Mention: Vivien on the Hunt 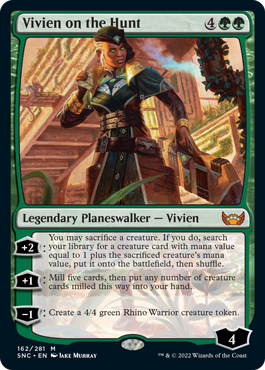 Vivien on the Hunt doesn’t cleanly fit into any of the families, but I had to bring her up anyway because she is one of the most exciting cards in the new set. Whether Standard has room for a six-mana green planeswalker remains to be seen, but Vivien will certainly be tempting. The first thing that jumped out to me was the -1 ability that allows her to create a huge 4/4 Rhino. That will often be an excellent way for Vivien to protect herself.

The ability that has been getting the most attention is her +2, which essentially replicates the card Neoform. However, since it can be activated every turn, more players have been comparing it to Birthing Pod. I don’t know if a six mana planeswalker will make for the best combo piece, but any card receiving comparisons to Pod is sure to have some potential.