This past weekend saw the final tournament of the 2020-2021 competitive season, the 27th Magic World Championship. The past year has been a dramatic one for professional MTG, with announcements about the future of competitive play changing how many of us see the game. Even the lead up to the World Championship itself saw drama when Wizards of the Coast cut the prize pool by 75%, only to provide this amount back in appearance fees after a public outcry. Although the future may be uncertain, this tournament was still one to remember (and may in fact be remembered as the final World Championship).

The winner, and new World Champion, was Yuta Takahashi of Japan. Takahashi had a great season playing in the Rivals League this year which led to his invite to the tournament. The format for the weekend was three rounds of Innistrad draft followed by seven rounds of Standard. Takahashi was all but discounted from the tournament after he lost every match of draft, but amazingly went 7-0 in Standard and then 3-0 in the playoffs, winning ten matches in a row to become the World Champion. I had the honour of playing against Takahashi in the final rounds of the first Insight 5K Historic Open this year. I know him to be an extremely humble player who truly enjoys Magic for the fun and the spirit of the game, and I don’t think there could be a more deserving champion. 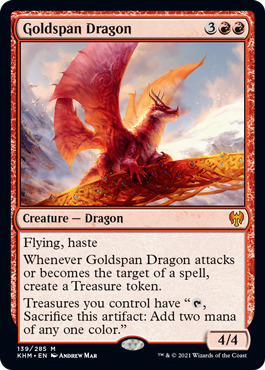 Yuta Takahashi is known for his mastery of the Fairies deck in Modern, and throughout his time in the Rivals League he brought a variety of under-the-radar decks, often playing something completely unique. Indeed, for this tournament he brought Izzet Dragons, a choice no other player made. The metagame of this sixteen-player tournament was interesting, but not entirely surprising. Four players brought Izzet Epiphany, a controlling deck with an indomitable late-game of endless Alrund’s Epiphanies. Another four brought a Grixis variation of the same deck, hoping that Duress could help break the mirror. Three players brought Mono-Green Aggro which is widely considered to be the second most powerful deck in the format, and two players brought Mono-White aggro, which may have been a metagame call for players trying to maximize their chances against Epiphany. Three players brought unique decks: Takahashi with Izzet Dragons, Jean-Emmanual Depraz with Temur Treasures, and Noriyuki Mori with Azorious Aggro. 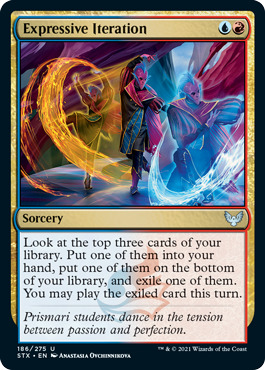 Over half the field was playing some amount of Alrund’s Epiphany, while the rest played aggressive or tempo decks. This metagame illustrates just how prolific Alrund’s Epiphany has been and how much it has pushed midrange decks out of the format. The high representation of Epiphany decks was matched by its win rate, with Izzet and Grixis Epiphany decks both having a 57.1% win rate on the weekend. Aggressive decks fared less well, with Mono-Green going 33.3% and Mono-White going 42.9%. Two players managed to call the metagame successfully and were fully rewarded for it. Jean-Emmanual Depraz went 5-2 with his Temur Treasures list that aimed to overpower aggro decks and outmaneuver the Epiphany decks. The Temur deck is similar to Gruul decks with Magda, Brazen Outlaw and Esika’s Chariot from last season, but takes advantage of treasures and pathway lands to include an easy blue splash. By playing just a few counterspells aimed at Epiphany, Depraz was able to play a midrange deck while still having a chance against blue decks’ late-games.

Takahashi’s Izzet Dragons list has similarities to Izzet lists from last season but was also very clearly brewed specifically for the weekend. Because players were all preparing to face Mono-Green and Izzet Epiphany there were fewer answers for Goldspan Dragon, which Takahashi and Depraz predicted perfectly. Goldspan Dragon might not be the best against Epiphany decks in general but it is still an extremely powerful card and it can wreak havoc when not prepared for. When decks are playing Fading Hope as one of their main “removal” spells because it is so good against Wrenn and Seven tokens and Old-Growth Troll, then Goldpan Dragon can really shine. Takahashi also played a full playset of Smoldering Egg which provides a cheap threat that can be deployed early, defend against aggro, and then pay off later in the game. There is a wide variety of instants and sorceries in the deck, including many one-of’s such as Fading Hope and Dissipate. Takahashi’s deck also has a full suite of card advantage spells with four copies each of Expressive Iteration and Memory Deluge. His deck-building proved successful, going 10-0 to win a World Championship. 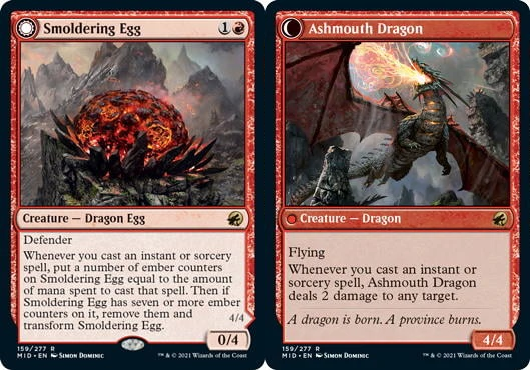 Many people expected a change in the Standard format following this tournament, most likely coming in the form of an Alrund’s Epiphany banning. However, earlier this week it was announced that no bans will be made in Standard until after Innistrad: Crimson Vow is released in November. It seems that the high turn out and win rate of Epiphany decks is acceptable for now, although it seems just as dominant as a lot of decks that have been banned from Standard in recent years.

Looking forward to the Standard Arena Open this weekend, there are a few options for players. While off-meta brews have shown that they can take down tournaments in the current Standard, it is still apparent that blue and red Epiphany decks and Mono-Green Aggro decks are the most powerful in the format. I would most likely play an Epiphany deck for the tournament, but if I was more experienced with Aggro then I would consider that to be a near equal option. I probably wouldn’t take a Goldspan Dragon to the Arena Open because it was only so successful at the World Championships due to its surprise factor. Now that more people will be prepared for it when choosing their decks and removal spells I don’t think it will be as successful as the traditionally most powerful decks in the format. If the World Championship told us anything I think it’s that Izzet and Grixis Epiphany decks will continue to perform well even when they are prepared for, and that they are a great choice for the Open and any Standard event in the foreseeable future. Good luck to any of you who are playing in the Standard Arena Open and also congratulations to the 2021 World Magic Champion, Yuta Takahashi!