Hey guys, This week on Modern musings, I’m going to be introducing you to the last couple of prison decks that I’m going do be doing for a while, starting with the one I teased last week, Alcatraz.

For those who haven’t heard of it before, Alcatraz was a prison, but it wasn’t just any prison, it was THE prison.  Alcatraz was the name that prison guards would drop to get their wards to behave.  It was the ultimate threat, it was the effective boogeyman for prisoners.  Reputations aside, the prison was actually used as a last resort for unruly inmates, or those that were perceived to be “beyond hope”.  As such, the prison became home for some of the most notorious criminals, like Al Capone.  One of the reasons that Alcatraz was specifically chosen for this role was its geographical location, a small island in the bay of San Francisco.  This made it incredibly difficult to escape as there were so many natural barriers preventing the inmates from doing so.

There are other, more subtle reasons for why Alcatraz was so difficult to escape from as well.  Even if a prisoner did escape from Alcatraz, a number of factors would be working against them.  First, they would have to tangle with the fact that the prison was on an island.  If they overcame that obstacle, they would have their own notoriety to contend with.  The prison was so well known for being difficult to escape from, and the people in it were well known for their crimes and bad behavior so if a prisoner did escape half the country would be looking for them based because of the press.

Notoriety is a dangerous thing

Like a criminal escaping Alcatraz, in magic, when a deck gains the spotlight, it loses some of its potency. For example, when Death Shadow zoo first started running Temur Battle Rage, there were probably a lot of people that lost simply because they tapped out for a spell and tried to block Death’s Shadow instead of keeping mana open and pathing it.  Playing around your opponents cards is one way to combat well known decks, but what if one wanted to undertake a more proactive solution? 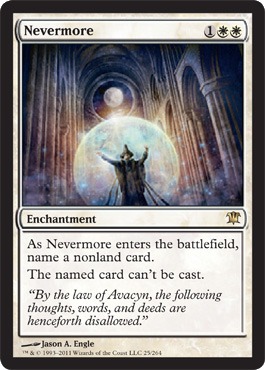 Each of these cards allows you to start chipping away at your opponent’s win conditions.  As it happens, with some exceptions, most decks in modern tend to run more disruption than actual ways to win the game.  For example.  the Jund version of the Death’s Shadow deck only has 2 creatures that can realistically kill you; Death’s Shadow and Tarmogoyf.  If you Nevermore the one they haven’t cast yet, then Runed Halo the one on the battlefield, they cannot reasonably win the game.  In the Grixis version, they have Tasigur, the Golden Fang, Gurmag Angler, and potentially Snapcaster Mage in addition to Death’s Shadow.  Here it’s much harder to get the lock since their threats are diversified.  However, you can still make the game very difficult for them by getting rid of 2-3 of their win conditions.

So far we’ve been talking about these cards as if we always know what our opponent is on and what cards they are likely to be playing.  It is fair to say however, that most of the time, you should be able to mostly guess what your opponent is playing by the end of their first turn.  This is where the skill behind this deck starts to come into play, as you need to be able to identify what your opponent is playing and know which cards to name to hurt them the most.  That being said, we also have these cards to help: 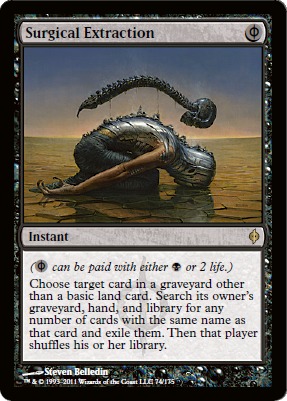 These cards both allow us to see what our opponent is playing while also taking a threat out of their hand (or deck in the case of surgical extraction).  This deck seems like it has a bunch of cheap spells so far and no source of card advantage yet, so how about running good ol’ bob:

Finally, we need a way to actually kill our opponent.  This one was a little tricky since we need to be killing our opponent in ways that they won’t be killing us, since nevermore is a symmetrical effect.

Monastery Mentor is a card I’m always looking for excuses to play, It’s a sweet finisher in this deck because of all the cheap non-creature spells we are running.  Lingering Souls serves the dual purpose of junking up the board while also potentially letting us overwhelm our opponent with fliers.  Gideon also serves multiple purposes here as he is both offensive and defensive.

After play-testing with the deck a bit against my friend, there are a couple take away lessons: Like I suspected the Death’s Shadow decks have a hard time dealing with this deck, I clinched victory over the Grixis version with relative ease as they don’t really have any way of dealing with Runed Halo.  The Scapeshift/storm match-ups are really hard to lose, though Scapeshift has some decent sideboard hate.  The hardest matchup for this deck I think is probably the new devoted druid combo, which I lost to in back to back matches.  The problem with that matchup is that they have multiple ways to get around your Nevermore/Runed Halo package.  They can kill you with either Murderous Redcap or Walking Ballista, and they can get Devoted Druid/Vizier of Remedies/Duskwatch Recruiter off of Collected Company.  The matchup feels like it should get considerably better post board when you get to bring in Rest in Peace and Leyline of Sanctity, but they bring in enchantment removal, and the onus is on you to have drawn your sideboard cards.

Anyway that’s all for this week, next weekend is GP Vegas, I’ll be working at the Magic Stronghold/Fusion Gaming booth for most of the GP if you want to come say hi.  I will of course be playing in the modern event however and hopefully I’ll be able to squeeze my tournament report in time for next week’s article.