Hey everyone and welcome to another Modern Musings! This week we are going to be taking a look at one of the more broken effects in the history of magic and how it applies to us in modern: untapping your lands.  Now I’m not talking about getting to untap your lands at the start of every turn, I’m talking about effects that untap your lands, like Arbor Elf.  Of course, effects that untap your lands are not new to magic, we’ve had such effects since at least Antiquities in the form of a very famous card: Candelabra of Tawnos.

Fortunately for us, we have a Candelabra of Tawnos in Modern in the form of Magus of the Candelabra. Let’s take a quick look at the differences between this guy and his namesake card:

So why am I bringing Magus of the Candelabra up now? Mostly because I think he has untapped potential in comboing with the new Ixalan lands.  In particular, I’m looking at Growing Rites of Itlimoc // Itlimoc, Cradle of the Sun and/or Nykthos, Shrine to Nyx as a potential way to abuse it, which as of now puts us solidly into Elves or Mono-Green Devotion territory.  I think that Elves doesn’t really need much help right now, so I decided to see what Mono-Green Devotion would look like with these cards:

This is what I came up with, and it’s still a little rough around the edges, but I think that Magus of the Candelabra fits very well into a deck like this.  In addition to Nykthos, Shrine to Nyx and Growing Rites of Itlimoc // Itlimoc, Cradle of the Sun, the Magus can also untap lands that have been enchanted with Utopia Sprawl.   I am less sure about how often our new Gaea’s Cradle with flip though with the creature density being not as high as a collected company deck.  So what are we going to do with all this mana we are generating?  The answer is that we have a variety of top end finishers, from Genesis Wave to Emrakul, the Promised End. 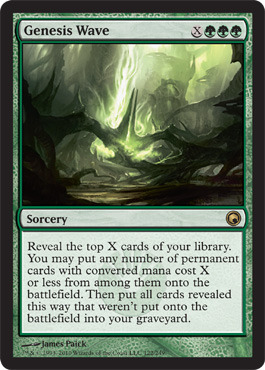 Well, that’s all for this week guys. If you think you have an idea utilizing Magus of the Candelabra, feel free to let me know and join me next week when I unveil my special Halloween-themed deck.