Hey everyone and welcome to another modern musings!  This week we are going to be taking a closer look at Hollow One and its potential abuses.

A long time ago we had another card that seems very much similar to Hollow One called Myr Enforcer.  If you’ve played against affinity, then it probably isn’t very hard for you to imagine how players very frequently would play a Myr Enforcer on turn 2.  Now though, affinity has moved on to bigger and better things, despite the fact that 1-2 mana 4/4s are still pretty good.  Being able to play creatures above the curve is the hallmark of a broken strategy (see affinity, eldrazi, death’s shadow and amulet bloom).

One of the reasons that I’m even talking about Hollow One is that Frank Lapore recently played a R/G deck featuring it.  Here is the list that he ran:

Right away, I noticed a couple things about this deck.  First of all, this deck only utilizes half its resources, only minimally utilizing the graveyard for some delve.  While this is a valid route to take, I feel that there are a lot of cards that you don’t actually want to discard in a deck built on discarding cards.  Cathartic Reunion especially looked bad as Frank himself pointed out that he was often faced with discarding good cards to it if he wanted to cast it.

So if not this list, what list should you run if you’re interested in pumping out Hollow Ones?  For starters, It seems prudent to add black for Gravecrawler and Bloodghast, both cards we don’t mind discarding to Cathartic Reunion.  Next, since we are running creatures that come back from the graveyard we should probably be running Prized Amalgam, since it directly benefits from that.  Finally, we need to increase the number of zombies in our deck since Gravecrawler needs a zombie in play, but it would also be nice if said zombie could also be a discard outlet for our graveyard creatures and Hollow One.  Fortunately for us, such a card exists, remember this guy? 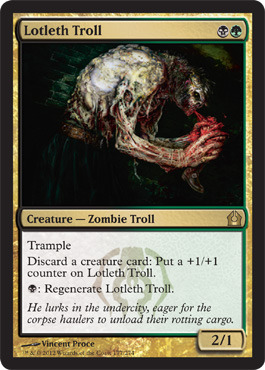 I think that this guy is actually really hard to kill right now.  With the prevalence of Fatal Push in favour of Dismember, the number of ways to actually kill this guy are fairly limited.

This list is more of my speed as it tries to utilize both the graveyard and the discarding to its advantage.  One thing about this deck that it has over the other deck is that it has a more robust control matchup than the plain R/G version.

Anyway, that’s all for this week, join me next week when we look into Training Grounds and how we might be able to break it.