Hey everyone! Welcome to yet another Modern Musings!  This week I had another Mox Amber deck planned, but after doing some testing, I found that the deck really didn’t need it.  Really there were two stars of the deck, and those were Time of Need and Board the Weatherlight.  The latter actually performs surprisingly similar to a white Ancient Stirrings in the right deck.  As for Time of Need, it’s not really controversial to say that its stock has risen significantly since the release of Dominaria, a set full of legends.  In light of this, I think it’s appropriate to revisit why this effect is good.

Creature tutors are powerful.  Chord of Calling sees quite a bit of play, Traverse the Ulvenwald shows up in the green-based Death’s Shadow lists, while both Green Sun’s Zenith and Birthing Pod were banned for their ubiquity and power level in creature strategies.  The ability to get whatever creature you want, when you want it, is extremely powerful. 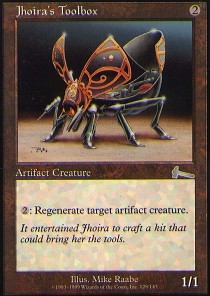 The idea behind our deck is that we can be a creature-based toolbox deck that tries to provide answers to the questions that our opponent’s deck is asking us.  For example, if our opponent is playing Storm, we can tutor up a Thalia, Guardian of Thraben, or if they’re control, a Thrun, the Last Troll, or  Kataki, War’s Wage against Affinity.  The point is that given the large pool of legendary creatures in Modern now, we should have an answer to most decks, and the idea is that because we can tutor for them, we can run a bunch of silver bullets that hose our opponent’s strategy.  The downside of this kind of strategy is that because we are so creature heavy, we will be light on sweepers, meaning we’ll be somewhat vulnerable to swarm-style decks.  Baird, Steward of Argive will help with this somewhat.

Time of Need isn’t the only reason to play a bunch of legendary creatures.  There is also the famously bad Untaidake, the Cloud Keeper.  In the past, it was bad because there hadn’t been a high enough legendary creature density to really abuse it’s power.  Either that, or the best cards to play weren’t legendary.  But now, there are so many good legendary creatures, it’s rather easy to do so.  This lets us have access to an Ancient Tomb, allowing us to cast our normally expensive spells much earlier.  Our other payoff card is Board the Weatherlight, a card as mentioned earlier, comes very close to the power of Ancient Stirrings in our deck.  We can even use this card to get the aforementioned Untaidake, since it gets any historic card, which includes legendaries.  The card might be powerful enough to consider running more legendary lands in a different, less color-intensive deck.  But that’s a deck for another time.

Another important card to note is that I am running a singleton copy of Thran Temporal Gateway as a resilient way of cheating in our legends at instant speed.  We can use Time of Need to tutor for an Emrakul, the Aeons Torn for a sweet kill with it as well.

While I don’t think that this deck will be winning any GPs anytime soon, It is definitely FNM playable and really fun to pilot.

Anyway, that’s all for this week!  As always let me know what you guys think, and I’ll see you next week!