Yes folks, it’s finally time time for Training Grounds!  This week on modern musings I’ll be unveiling what I think could be a competitively viable archetype as the deck has a multitude of combos and synergies that are quite strong.  In addition I’ll be taking you through my thought processes that lead up to the creation of the deck, and what tools and synergies didn’t quite make it in that could be good in a different shell.  Let’s get to it!

Why is this card good? 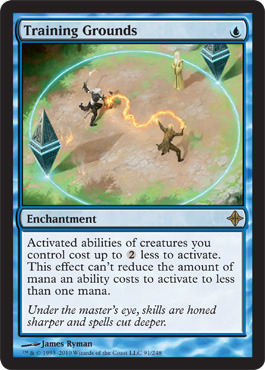 While sometimes the answer may seem obvious, It’s always important to ask this question to better understand why and in what situations cards perform as they do.  In this case the answer of why this card is good is trifold: It’s cheap, cheats mana, and effects a high percentage of cards.  Magic R&D are extremely capable people and know that free spells and effects are almost always too good, which is why they built in a sort of “safety valve” into the card itself.  This is, of course, referring to the clause that prevents activated abilities from costing less than 1 mana.  It’s also important when determining if a card is good or not is looking at the pool of cards it effects.  For example, if you’re trying to determine if the card Steamflogger Boss is a good card in modern you would look at all Riggers and contraptions.  The first effect “Other Rigger creatures you control get +1/+0 and have haste.” has a grand total of 2 cards that it has an impact on: Steamflogger Boss and Moriok Rigger (which was errated to have the rigger creature type).  The second ability is easy enough to evaluate because it has a grand total of 0 cards that it has impact on.  Generally speaking, the fewer cards that a build around card impacts the more powerful it must be to be justified in playing it.  It’s pretty safe to say that Steamflogger Boss‘s effect is not strong enough to justify how narrow it is, and therefore is not good.  Finally, having a CMC of 1 is about the best you could ask for with a build around card (see Hardened Scales for example).

The key to looking for good creatures to abuse with training grounds is if they have an ability with 2 generic mana and then a colored cost.  The next thing to look for is abusable effects.  Along my search I bookmarked these cards for having some of the dirtiest potential interactions:

The ability to play your spells without having to expend them from your hand is a spicy thought and definitely gets the brewing juices flowing.  There are lots of mouthwatering value plays that can be made with this guy.  Even just threatening to use a Path to Exile on them every turn is too much for many decks to handle.  The fact that it has lifelink and gives your burn spells lifelink is just icing on cake. 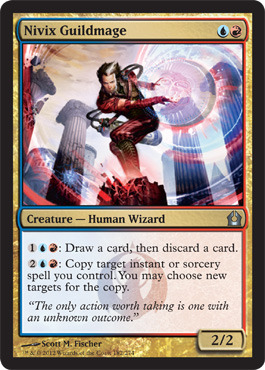 This guy is pretty similar to grand master in that you get to have the same effect multiple times (albeit immediately instead of later), and goes infinite with the same card (that we’ll talk about later).  The other thing is that he trades off lifelink and spell lifelink for a loot effect.  While both abilities have merit, I would normally have to give the edge to the looting ability as there are a number of matchups where the lifegain really won’t do much, while looting is always useful.  However, the fact that you have to play blue and red to activate both abilities is actually annoyingly relevant and bad for trying to abuse said abilities. 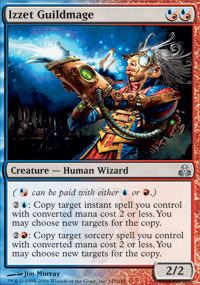 Izzet Guildmage is the sort of holy grail of effects that are really busted with Training Grounds.  Both of its abilities cost a single mana after reduction, and the ability itself can be extremely high impact, casting a one or two mana spell and then copying it 2 to 3 times can be truly absurd in many cases and game winning in others. 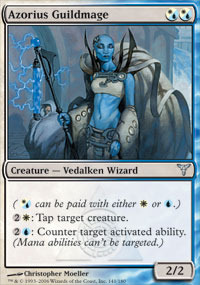 On the more value-oriented side of things Flickerwisp is a fine choice for controlling the board and potentially keeping a few decks from functioning at all such as tron and affinity.  The downside is that without training grounds in play the guildmage’s abilities get much less effective.

It’s legitimately scary to be able to blink creatures for only 1 colorless mana.  Combo it with Flickerwisp to lock your opponent out of the game, or Reveillark to get creatures back from the graveyard, or Mulldrifter to draw as many cards as you like.  The possibilities are endless. 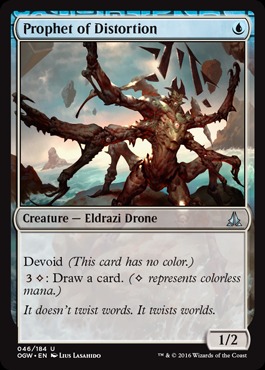 The other Eldrazi to make our list, Prophet of Distortion very simply is a one mana creature that allows you to draw cards.  That’s about it.

The main interaction that I alluded to earlier that goes infinite with the copiers is Manamorphose + Training Grounds + any of the copy creatures (e.g. Izzet Guildmage ).  The idea is that you use this combo to draw your deck, generating around 40 mana or so from Manamorphose, then casting something like Banefire or Walking Ballista for the win.  Such a deck would look something like this I think:

You’ll notice that I’m using Soulfire Grand Master instead of Nivix Guildmage, the main reason for this is because with a training grounds in play, Soulfire goes infinite with desperate ritual, while Nivix does not.  I think that this deck, while not bad, and can do some pretty sweet things, it ultimately looks like a worse version of storm.  I think we can do better.

I enjoy decks that drown your opponent in value, and I like the sound of a deck where you get to Path to Exile your opponent’s team or lightning bolt your opponent’s face 5 times or maybe even copy an Ancestral Visions.  If that sounds up your alley, then I have the right deck for you.

This is considerably more value based than the previous deck while still having some combo elements in it.  I figure that it might be better to be a little less all in on the combo, since you probably just get outraced by storm anyway.

But what if you’re not interested in going Jeskai?  What if we went Bant instead?

This is what you get I believe when you max out on the value scale.  There are so many synergies within this deck, but the main one that you’re relying on is between Training Grounds, Eldrazi Displacer, and Venser, Shaper Savant.  This combo enables you to bounce a permanent for a single colorless mana, allowing you to quickly bounce all their permanents back to their hand and also allowing you to have a counter shield up at all times (because venser also bounces spells).

Well everyone that it for this week, next week we may be talking about the ban(s) and/or unban(s) that may occur, or if nothing happens then we’ll start combing the Ixalan spoilers for tasty modern cards.