I originally had a completely different article planned for this week, with custom cards I made with art from the Rijksmuseum. In light of recent events, I felt it important to take some extra time to review my choices of card names and images. I live a privileged life, and I may not always see the negative connotations of something. That doesn’t mean I shouldn’t try to do better.

That article will hopefully come out sometime in the future, but for this week I have a new Commander deck to discuss instead. Building it has been a been a welcome distraction from… well, everything, really. So, I invite you to take a break, grab a cup of tea and join me as I discuss my list for Xantcha, Sleeper Agent. 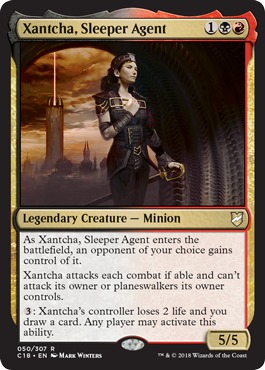 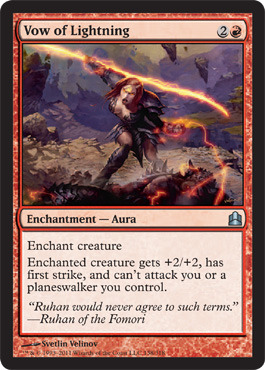 The idea for this deck goes back about six months to a Commander game I was playing with my D&D group. I don’t remember all of the details, but as I recall, one of my friends was using his Zedruu the Greathearted deck, and across the table was another friend with Uril the Miststalker. The Zedruu deck managed to find a way around Uril’s hexproof to enchant him with a Vow of Lightning. Another large creature hit the table, and it got saddled with a Vow of Duty. These auras got my gears turning. 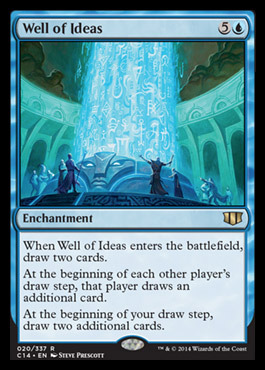 I’d wanted to build a Xantcha, Sleeper Agent deck from the moment I saw her, but I never got very far past “Hey, that’s a neat card!” I had no idea what a Xantcha deck would look like, so I moved on and started working on other projects. For some reason, that night with my D&D group, everything seemed to just come together: what if I built an aura-based deck, like you see with Uril, but focus it around the Vows and negative auras, like Spiteful Shadows and Visions of Brutality. I could even add a few other auras like Vampiric Link to leech off of my opponents’ creatures.

I was excited by the idea of the deck, but I never found the time to actually sit down and build it. I kept setting aside potential cards whenever I came across them, but it was little more than an assortment of enchantments in a box. When working on my Cube I spent a good deal of time sorting my collection, and I found a lot of interesting auras to consider. By the time the Cube was done, my box of weird enchantments was full. I dug out my copy of Xantcha and added her to the box.

A few weeks went by and I finished up some other small projects. Xantcha wasn’t going anywhere, and it would be a while before I had a chance to play Commander with my friends again. Then I got a message from my D&D group saying we might get the group together soon if the local pandemic numbers stayed low and stable. Even just the potential of meeting up again gave me a huge boost of motivation, so the other day I started to go through that box of enchantments.

It was no small undertaking; while I had a general idea of what I wanted the deck to do, I still had a massive number of cuts to make. Dead Weight is pretty good, but would it really be worth it in Commander? What about Sinister Possession? I went through the box over and over trying to separate the cards that I thought were absolutely essential from the ones that I just really liked. Eventually I came up with the core of the deck: 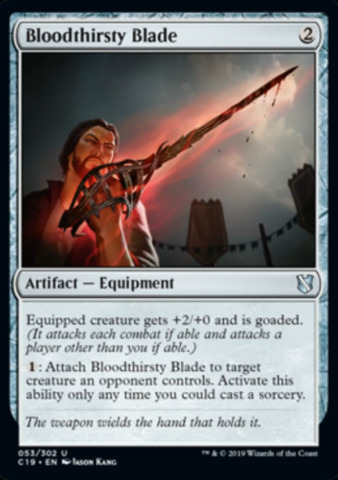 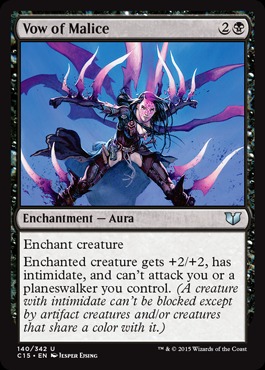 Bloodthirsty Blade and the two Vows are unsurprisingly the cornerstone of this deck; I need ways to encourage my opponents to attack each other instead of me, and the best way to do that is to deny them the option altogether. The new Impetus cycle from Commander 2020 would also be good, but I haven’t picked those decks up yet. 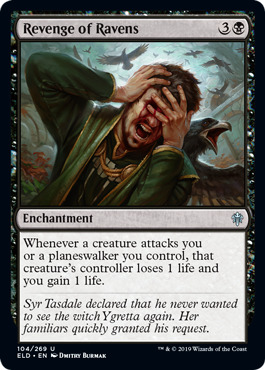 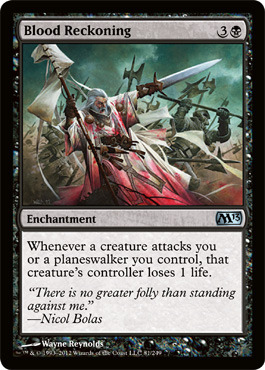 The other way to avoid unnecessary combat damage is to make it that much more inconvenient to attack you than it is to go after someone else. Enchantments like Revenge of Ravens and Blood Reckoning arent as good as Ghostly Prison in that regard, but sapping life for each attacking creature certianly helps. If we ever see another reprint of No Mercy I’ll have to look into getting a copy of it for this deck for similar reasons. For now I’ll just have to supplement these cards with deathtouch creatures like Vampire Nighthawk and Gifted Aetherborn instead. 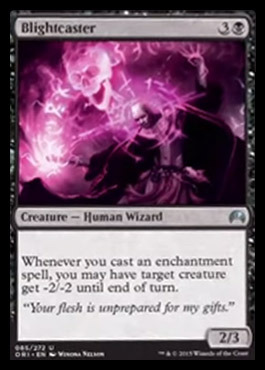 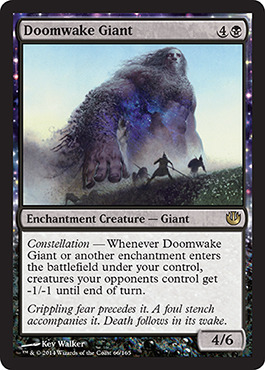 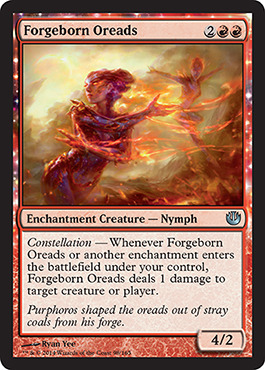 As an enchantment deck, I felt like Blightcaster and constellation creatures like Doomwake Giant were obvious inclusions, though one challenge I faced was the limited number of options in red and black. Agent of Erebos and Forgeborn Oreads are pretty good, but that’s about it. Thoughtrender Lamia is admittedly a powerful option, but forcing your opponents to discard cards is a good way to draw their attention, and Revenge of Ravens just won’t cut it if the entire table wants to eliminate you. It’s far better to let everyone keep their cards and encourage them to use them against each other instead.

As for Hateful Eidolon, it’s best with aura-based removal, like Dead Weight or Death’s Approach. While I ultimately didn’t add very many of these killer auras to the deck (Stab Wound being a notable exception), I’m still pretty happy if I only end up drawing one card with the Eidolon. Also, since it’s an enchantment creature, it has some additional utility in the deck as a cheap way to trigger constellation abilities, or even just to block something. 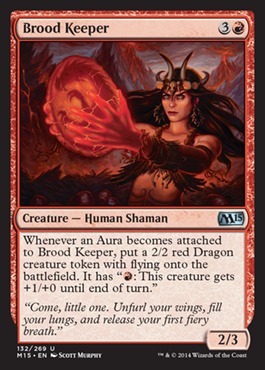 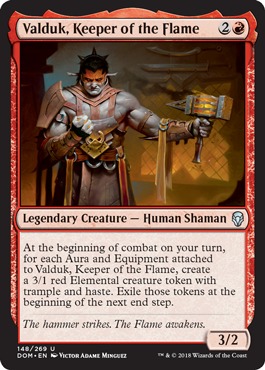 Brood Keeper and Valduk are oddities in this deck, insofar as they’re creatures I control that want to be enchanted. Some of the deck’s auras, like Vampiric Link and the Vows are flexible enough to be good whether they’re attached to my creatures or my opponents’. While these two creatures don’t necessarily line up with the deck’s primary game plan of messing with everyone else’s stuff, they should go well in the deck regardless. 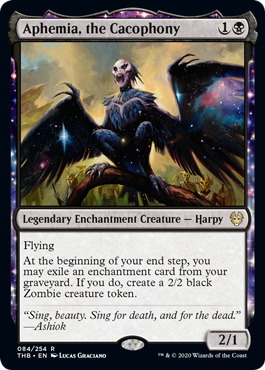 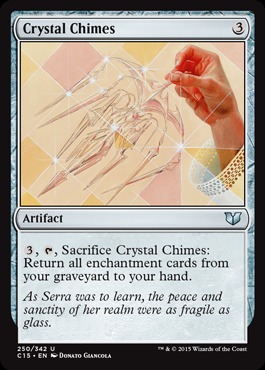 Aura strategies can be somewhat fragile, especially in a world with Aura Shards and Back to Nature. Unfortunately, there aren’t any ways in black or red to get enchantments back from the graveyard. Aphemia gives the deck a way to reuse destroyed enchantments, which helps, but it’s not ideal. Thankfully there are colourless options: Crystal Chimes can get a bunch of enchantments back from the graveyard all at once, and Skull of Orm provides a way to repeatedly get one back every turn. These aren’t the most mana-efficient cards ever printed, but they’re important to this deck by virtue of being the only cards to provide enchantment recursion for these colours. 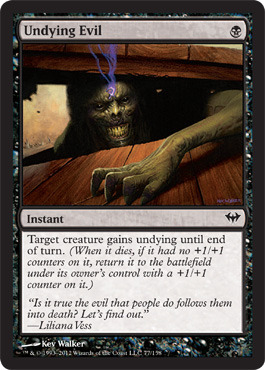 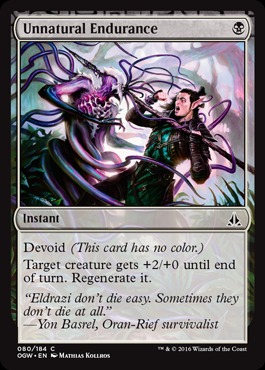 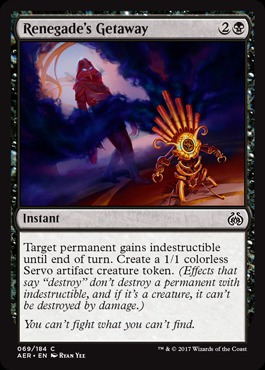 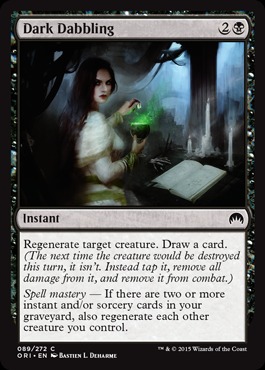 Aside from these core cards, most of what I’d set aside were somewhat interchangeable, so I could trim them down. I had a lot of negative auras, for instance, but while Sinister Possession, Spiteful Shadows and Visions of Brutality are all mechanically distinct, they effectively fill the same role in a deck. The same could be said for cards like Undying Evil, Unnatural Endurance, Renegade’s Getaway and Dark Dabbling. While I wanted some redundnacy, I didn’t have nearly enough room in the deck to include each card. Moreover, the deck was filling up with a lot of noncreature spells, and I knew that without any blockers I would be in trouble. Auras and combat tricks will only get you so far, especially when your Commander is always under the control of another player! 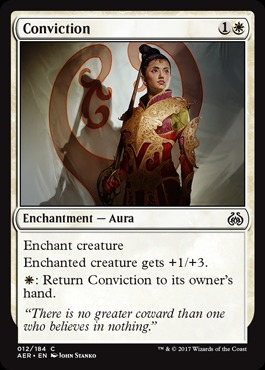 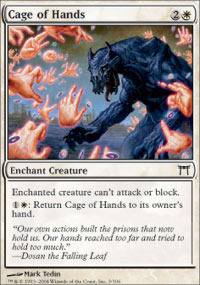 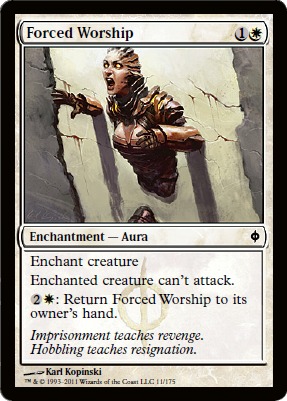 Perhaps the spiciest piece of tech I included in this deck was Ghitu Firebreathing and its older cousin Crown of Flames. For a single red mana you can return these auras to your hand from play, allowing you to recast them over and over again. I have to give full credit to Jim from the Spike Feeders for first introducing me to Crown of Flames, which I will always remember as one of the most powerful engine pieces in his Anax and Cymede deck. Being able to repeatedly trigger cards like Brood Keeper and Blightcaster is invaluable, and Crown of Flames is one of the cheapest ways to do that, at only two total mana. They don’t seem like much, but these modest auras give this deck a solid way to close out games.

If you’re looking for a similar effect in other colours, Conviction and Cage of Hands are both pretty good, though they do cost a lot more mana to loop. White decks could even use Forced Worship in a pinch, but that gets a bit unwieldy to keep recasting. 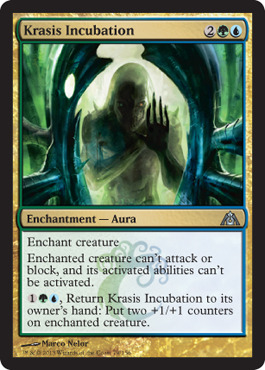 Blue and green decks have Shimmering Wings and Whip Silk, which are easily your best options in those colours if all you care about is triggering other cards. At only one mana each to cast and one to bounce back to your hand, these other parts of the Invasion aura cycle are just as good as Crown of Flames to cast over and over again. Otherwise I’d recommend Krasis Incubation; it costs a lot more mana to play and bounce, but it also provides a lot more versatility. I happily run a copy of the Incubation in my Vorel of the Hull Clade deck, since it works as both a Simic Pacifism and a way to put +1/+1 counters on my creatures. With enough mana, Krasis Incubation can even help generate infinite turns with Sage of Hours. Mind you, with enough mana any of these enchantments can generate infinite turns with that Sage, but I digress….

Depending how crucial these repeatable auras turn out to be for this deck, I might have to look into adding a copy of Mourning to the list. The black card from that Invasion cycle is pretty lackluster on its own, though, so I’d rather just have Crown of Flames and Ghitu Firebreathing for now. 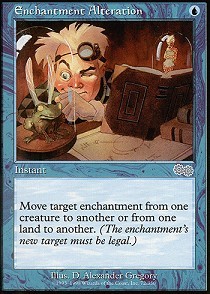 I’m sure to make some tweaks to the deck once I get a feel for what’s working. Plus, new cards will inevitably come out that I’ll want to try, like Demonic Embrace from Core 2021. I’ve said it before: nothing ever starts out being perfect. That said, this feels like a decent starting point.

If you’ve got any suggestions, whether they’re about this deck or anything else, please feel free to let me know.