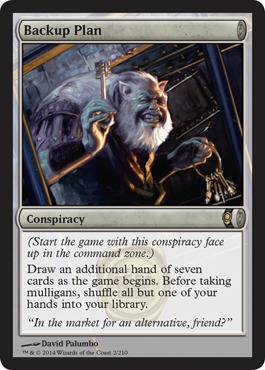 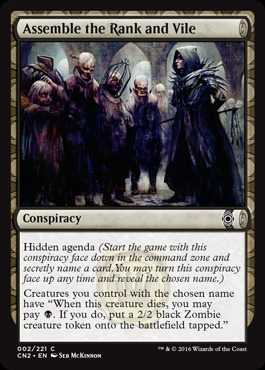 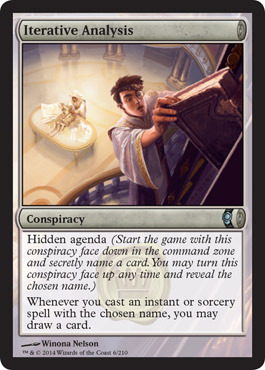 I love the Conspiracy card type. I’m really intrigued by the idea of taking an otherwise normal card and making it amazing by changing it ever so slightly. A reduced cost, an increased size, or a new minor ability could make the difference between an ok card and a great one. For instance, Lightning Strike is a pretty fair card that sees play in Standard, but not in older formats. If you tweak it a little bit you get cards like Lightning Helix and Lightning Bolt, both of which are significantly more powerful and see play pretty much everywhere.

When I first drafted the original Conspiracy set I loved picking as many of the titular card type as I could. I would get as many copies of whatever junk creature nobody cared about and I would give it a whole slew of free buffs. It was very satisfying to watch my opponents’ faces drop as I cast a chain of Sporecap Spiders that searched for more copies and came into play as 2/6s. Everyone quickly realized they could never get past my chain of blockers, and when the spiders started going on the offensive nobody knew how to handle them.

When Conspiracy: Take the Crown was announced I was very excited to see what new Conspiracy cards they would have. I’ll admit that I was somewhat disappointed at the results; while some of the new cards were really cool, most were underwhelming. They were far more balanced, but what got me excited about the first ones was how game-breaking they could be. Still, it was cool to see the card type return, and if we ever return to the plane of Fiora I look forward to what new Conspiracies might get printed.

The trouble now, though, is that I have all of these cool Conspiracy cards, but don’t have a use for them. They aren’t legal in any format, and with good reason; even the weaker ones from Take the Crown would warp a format like Legacy just by virtue of being free effects. I could try running them in a Cube, but the singleton nature of a typical Cube makes a lot of the abilities uninteresting or useless, and making a Cube with a lot of duplicates runs the risk of getting repetitive quickly.

So what’s the solution? Why, to invent a new format that uses these cards, of course! To that end, I present to you: Hidden Agenda.

Hidden Agenda is a casual constructed format for 2 players. It uses the familiar deck building rules of formats like Standard and Modern, but gives players access to the Conspiracy card type to upgrade their decks in powerful ways.

Players are encouraged to try Hidden Agenda with their existing decks first before building a deck specifically for the format, but if you want to dive in right away go ahead. The rules presented here suggest using Modern-legal decks, but the basic rules can be applied to any constructed format if all players agree.

The Deck and Sideboard
Decks are a minimum of 60 cards, with a 15 card sideboard. Decks are limited to 4 copies of any non-basic card, including copies in the sideboard.

Conspiracies
As part of deck construction, players are allowed to spend up to 3 points on Conspiracies.
Players may use a different point limit if everyone agrees.

Each Conspiracy costs a number of points ranging from 1 to 3.
The full points list is detailed below.

With 3 points a player may choose one of the following:

Players may choose the same Conspiracy more than once if they have the points available.

A player’s Conspiracies do NOT change between games, and are NOT counted when determining a player’s deck size or sideboard.

Games are 1v1. Players have a starting life total of 20. Matches are best of 3 games.

Before determining the starting player and drawing opening hands, players secretly write down card names for their Hidden Agenda cards, as necessary. Players then simultaneously reveal how many Conspiracies they are using, and reveal all Conspiracies that do not have Hidden Agenda. Face up conspiracies, as well as the total number of Conspiracies a player controls, are always public information.

Players may reveal their Conspiracies at any time.

At the end of each game players reveal all face down Conspiracies they control. They do not need to reveal which card was named for their Hidden Agendas.

Players may exchange cards from their main deck and sideboard as normal before games 2 and 3, but they may NOT change which Conspiracies they are using.

Hidden Agenda cards are turned face down before determining the staring player for the next game, and players secretly name cards again. Players may name the same card or a new one for Hidden Agendas at the start of every game. 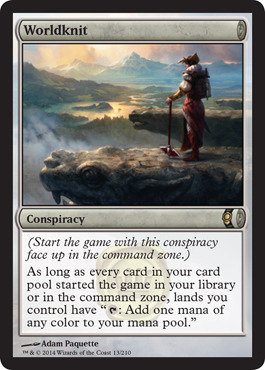 Worldknit
Your minimum deck size is 75. You may not include any cards in your sideboard. 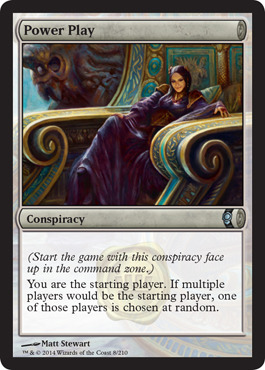 Power Play
The player with most Power Plays goes first. If both players are tied, determine the starting player randomly. 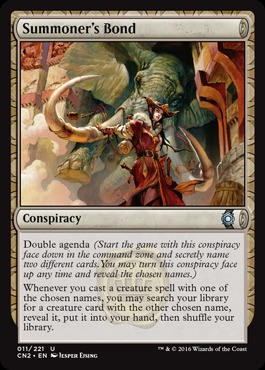 Summoner’s Bond
Double Agenda is treated as Hidden Agenda in all respects, except that two cards are named instead of one. 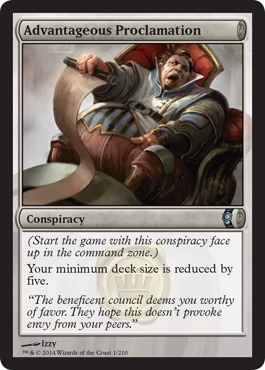 Advantageous Proclamation
Multiples of this Conspiracy stack. This deck size modification applies after all other Conspiracies. 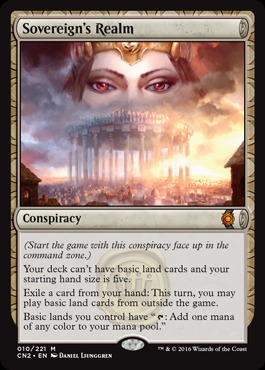 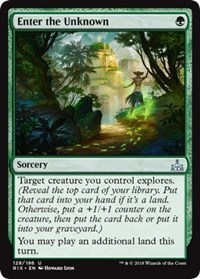 Here’s the disclaimer: this format is untested, so the whole thing could just be a big mess. I’ve been toying with the idea since the original Conspiracy came out, and while I like the premise I haven’t been able to get a group together to try it. I know there are a lot of broken things that can be done in Hidden Agenda, which might turn a few people away, but to me that’s part of the fun; being able to do Vintage-level plays with Modern-legal cards sounds pretty cool to me. It might mean turn-1 wins are a possibility, and combo decks certainly look like they’ll have an edge, but who’s to say? The costs of the Conspiracies are, at present, an educated guess; some might be too low, and some might be too high, but the list feels like a good starting place.

What I’m excited about is how customizable the Conspiracies can be. Pretty much any Modern deck could benefit from a Conspiracy or two, though which one you pick could greatly influence how your deck plays out. Even with two players using the same deck and sideboard, if they choose different Conspiracies they could have a radically different play experience. Does your Burn deck have 3/3 Goblin Guides, or do you opt for double-Lightning Bolt instead? Maybe you just want to go first every game. There are a lot of decisions to make in Hidden Agenda, and I hope people enjoy exploring what’s possible with the format.

Here are some ideas to get you started: 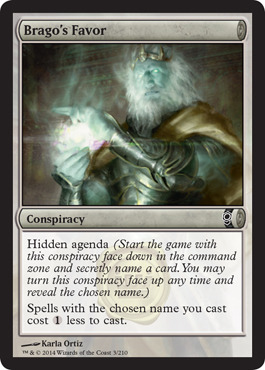 Brago’s Favor + Desperate Ritual
Storm is already a fast, consistent deck, but with Brago’s Favor naming one of its rituals the deck could potentially go off on turn 1 with a good hand. With a point to spare, taking Power Play would almost guarantee going first every game, making the deck pretty hard to beat! 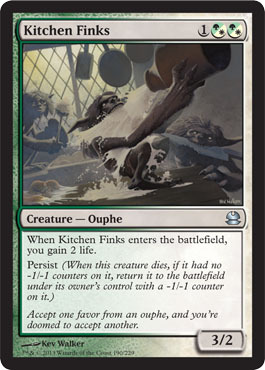 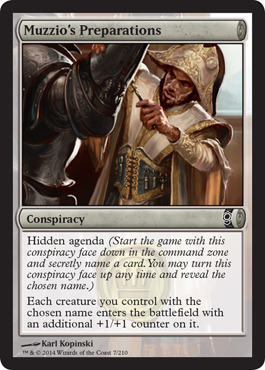 Kitchen Finks + Muzzio’s Preparations
Melira Combo suddenly gets a whole lot better when Finks gives itself a +1/+1 counter. Add a repeatable sacrifice effect into the mix and those immortal Ouphes will gain all of the life forever. 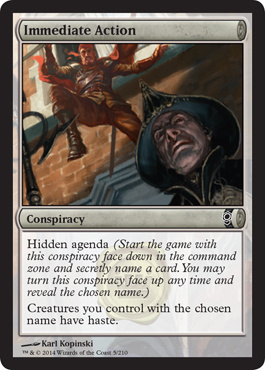 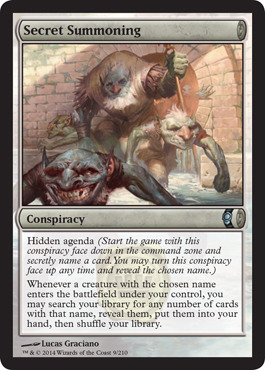 Elvish Mystic + Immediate Action + Secret Summoning
A hasty Elvish Mystic that search for more Mystics? That sounds like 6 mana on turn 2 to me! It’s scary to think what an Elf deck could do with that much mana that early on, but one thing is certiain: it can’t be good for the opponent. 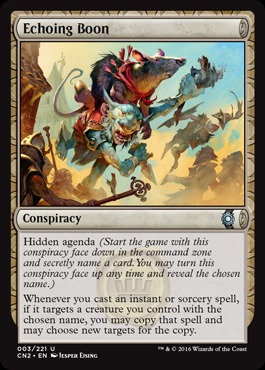 Glistener Elf + Echoing Boon + Immediate Action
Infect wants to kill you quickly with pump spells. Double all of those spells to kill you even faster! Add in Haste and you can easily get a kill out of nowhere. 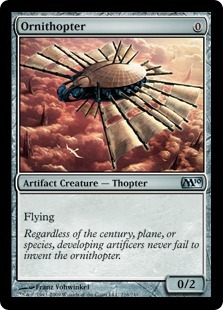 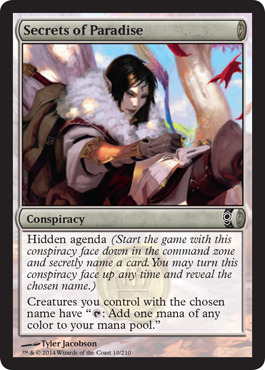 Ornithopter + Secrets of Paradise + Immediate Action
The bad news is that this “Mox” can be killed by a Lightning Bolt. The good news is that you get to play with another Mox in Modern, and this one doesn’t need Metalcraft to function.

A Fistful of Clerics 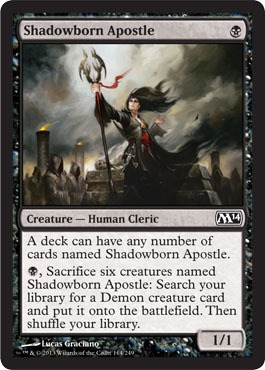 Shadowborn Apostle + Secret Summoning
What can you do with fifty Clerics in your hand on turn 1? I have no idea, but getting that many cards for only 1 mana has got to be good for something. Maybe you can kill someone with a Noose Constrictor or Zombie Infestation?

If you try a game of Hidden Agenda, let me know in the comments. If you have suggestions for corrected points costs, I would also like to hear them! Feel free to share the rules for this format if you’d like, but please link back to this article if you do; I’d really appreciate it.

I hope you and your gaming group have some fun with this new format and play some memorable games; I know I’m excited to brew something up for it!