My history with Magic: the Gathering hasn’t been as straightforward as you might expect. For years I had no interest in playing, and it wasn’t until about seven years ago that I fell into the game. It’s been quite the journey, so today I thought I would take a look at how I got to where I am now.

Way back when I was in elementary school, maybe 8 years old, I remember an older student showing off a Magic card or two. I had never seen cards from this game before, so I was curious to see them. I immediately regreted my decision. 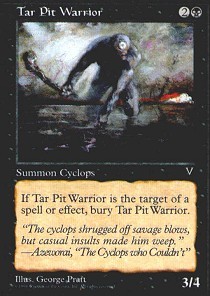 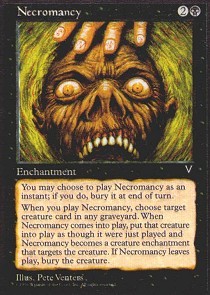 I don’t remember exactly which cards they were, but I distinctly remember that they were black cards, and that they terrified me. The art on one of them was of some monster, while the other was of a horrifying face. I remember the black mana symbol distinctly, in part because I tried to puzzle out exactly what the symbols meant.

I never wanted to see those cards again for fear of them haunting my nightmares forever. As it was, I had bad dreams for a night or two. I eventually got over my fear, but that vague memory of seeing those cards stayed with me. To this day I can still remember that feeling of dread they evoked in me.

Years later, around junior high, someone in my Scouting group excitedly tried to teach me how to play Magic. He was a good guy, but a terrible teacher. For weeks he was telling me that I absolutely HAD to learn how to play, and that Magic was such a great game, so when he finally packed his decks on a quiet night I agreed to try the game. I don’t remember all of the details of that game, but a few things stood out: I learned the basics of tapping mana, and that Lava Axe was a powerful card. 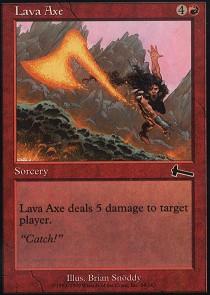 He had given me some sort of mono-red burn deck to play, and I think he had a green ramp deck of some sort. I remember specifically that my deck had no creatures in it, and his deck… well, whatever it was supposed to do, it never had a chance to go off. Our game was incredibly one-sided: he played a few spells that didn’t really do anything, and I just cast a bunch of burn spells. I think we only cast 6 or 7 spells that entire game, and most of them were my Lava Axes. At 5 damage each, my opponent didn’t last very long.

The game was kind of fun, but I didn’t really find it compelling. The art was cool, and I liked the look of the brown-bordered artifact cards that he had. If I ever got into the game I imagined that I would try to build a deck using nothing but those cards, but I never pursued it. It just didn’t seem all that interesting to me. 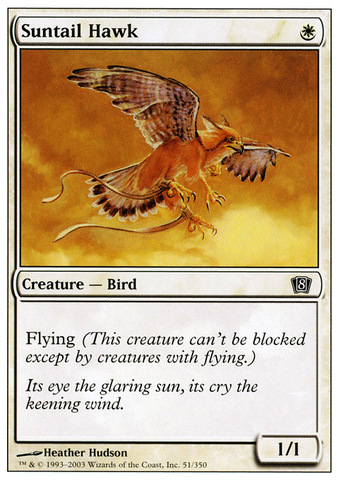 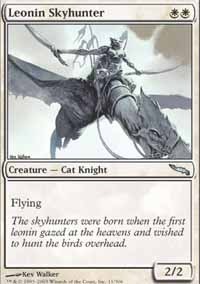 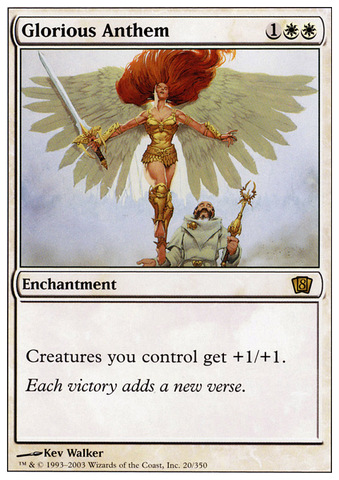 A year or two later, when I was in high school, I was over at a friend’s house to play some board games. He started telling me about Magic; I had seen him playing a bit online and was curious. He pulled out a couple of decks and we played a couple of games. I remember his cards looked very bright and crisp compared to what I had seen before; the frames were different from what I remembered, and his cards had white borders. At first I wasn’t sure that it was the same game I had been shown a few years earlier.

The deck my friend gave me to try was his mono-white all-fliers deck. His other deck was a blue concoction he was trying out from his spare cards. I won the first game pretty handily, especially since his blue deck didn’t really have a way to stop the flying onslaught. I think we swapped decks after the first game, but I can’t remember who won the second game. A part of me thinks I may have gotten luck and won that one, too.

After trying the game out again I was intrigued. The imagery of the white knights, soldiers and angels was very compelling, but I didn’t know anyone else who played. At the time I was more interested in other board games that I could take to the cottage and play with my family. If I was going to get into Magic I would only have one opponent, and he and I were happy playing other games anyway. I just couldn’t see myself getting into Magic; the game looked cool, but it just wasn’t for me.

Skipping ahead about 7 years, I just finished getting my undergraduate degree and was looking for work. I applied to work at one of the local game stores, and got hired almost right away. I was their board game expert, and I was expected to work during most of the Magic events that they ran in the store. Since I didn’t have much interest in playing it seemed reasonable to me. My disinterest, however, did not last very long. 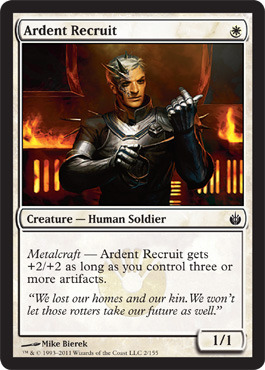 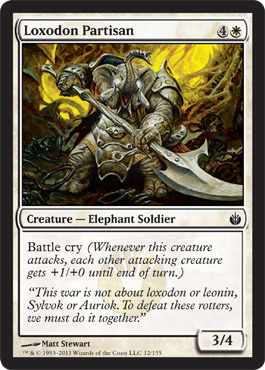 After working at the game store for a while I got assigned to sort through a collection of common cards. It was pretty mindless work, but I was determined to do a good job. By the time I was finished the common boxes would be the most organized they had ever been, with everything sorted by set, colour and name. I made sure to dig out any uncommon and rare cards that I came across, as well as a few more valuable common cards.

As I went along, I began to admire the artwork. Some of these cards looked really good, and as I sorted copy after copy of the same card into a pile I couldn’t help but start to read what they did. Some abilities popped out at me. Battle Cry. Metalcraft. Even just looking at these common cards I was beginning to get a feel for the set; a world at war, filled with incredible artifacts. It was compelling, but there was one card that finally won me over and convinced me that I wanted to play Magic: Mirran Mettle. 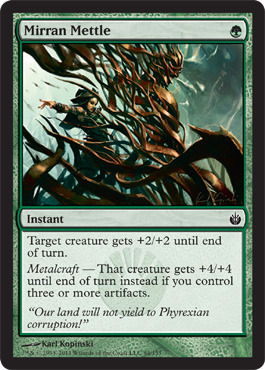 There was something about the artwork on Mirran Mettle that enthralled me. The composition, the colours, the sense of motion… I wanted to play Magic just so that I could use this card. I started looking at the other cards I was sorting, and began to imagine what sort of deck I could put together with them. Several other cards caught my eye right away, and before long I had the makings of a deck list in my mind. 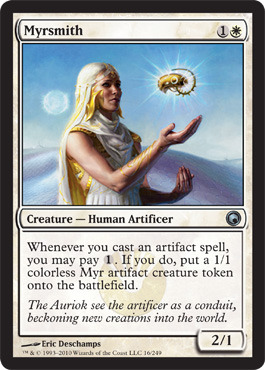 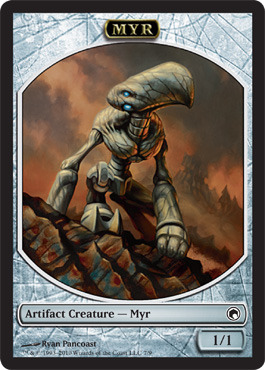 When I had some spare time I began looking through the store’s binders at some of the uncommon and rare cards, familiarizing myself with them. Mirran Mettle had already won me over, but Myrsmith and her corresponding Myr token cemented my decision to start playing. The artwork on these cards was gorgeous, and I loved the idea of building an artifact-heavy deck with all of them. I was enamoured, and when the opportunity presented itself, I would start playing Magic.

One Friday, back in May of 2011, my shift ended. This was my chance! I decided to stick around and take part in the FNM draft. My plan was to draft the cards I wanted to make my green-white Metalcraft deck so that I would have something to play in Standard. Drafting the cards seemed like a cost-effective way for me to get into the game, and it would also serve as a good way to learn how to play. Perhaps an ambitious plan, but I felt sufficiently prepared. 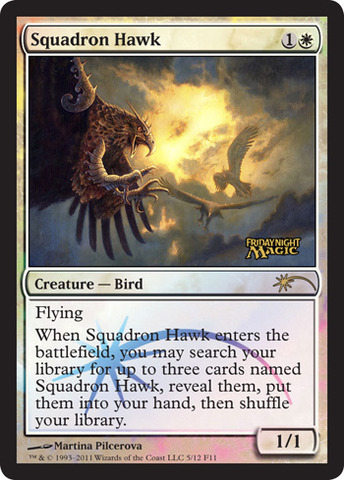 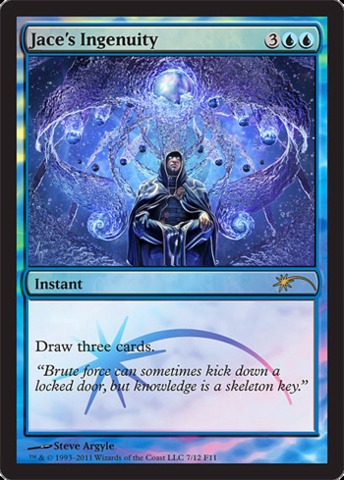 My co-workers gave me a quick crash course on how to draft (“B.R.E.A.D. – Bombs, Removal, Evasion, Aggro, Duds”) and how to play (“Untap, Upkeep, Draw….”). It helped that I had a specific deck in mind going into the draft, so it helped me stay focused. As I recall, by the end of the draft I had a pretty decent mono-white artifact deck. Unsurprisingly, I didn’t win any matches that night, but I did manage to win a few games and won a Squadron Hawk promo card to boot!

I learned a lot that night, and I had a lot of fun. I left feeling pretty good about the whole experience, and I even had most of my Standard deck already built. My initial white-green plan fell by the wayside as the deck stayed mono-white, but at least I still got to use the couple of copies of Myrsmith that I drafted. Armed with that Standard deck I played a few games here and there. I even tried my hand at an FNM tournament with the deck a few months later, where I got pummeled quite severely. It was still fun, though, and the Jace’s Ingenuity promo card still looks pretty cool in my foils binder. 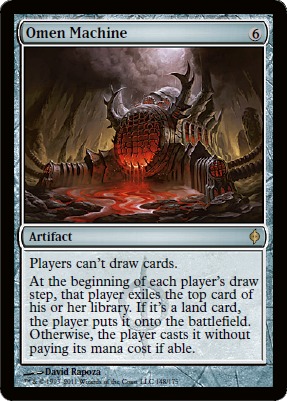 It’s fair to say that by the time the New Phyrexia pre-release rolled around, I was hooked. My disappointment in learning that (spoilers!) my beloved Mirrans lost the war with Phyrexia was a bit disheartening, but I endured. Time went on and I picked up more cards. I built new decks and tried out new formats. When Innistrad came out I already had a couple of Standard decks and was quickly branching out into Commander (or “EDH” as it was known at the time). From that point forward, each spoiler season I would pour over the list of new cards. I would dream of what deck I would build next, and make wish lists of what cards I wanted to get. There were always so many possibilites, and I always found a card or two to inspire me.

Now, almost 7 years later, I have well over 20 decks and I draft weekly. My knowledge of obscure cards and rules has been described as encyclopedic, and my collection of cards keeps outgrowing the boxes and shelves I store it in. I even write my Rants, now! I never would have imagined all those years ago that Magic would become such a big part of my life, but here we are. It took me a while to get here, but I’m glad I finally did. 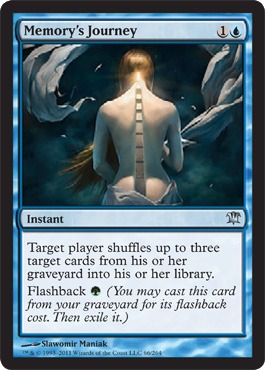 Do you have a story about how you got into Magic? Do you remember the first time you ever saw a card? I’d love to hear about it in the comments! And until next time, try not to get scared by a piece of cardboard.