You and your opponent have identical decks, and the ability to arrange your libraries however you want.
Can you come up with a winning strategy?

Scheming Symmetry is an experimental format that removes most of the random elements from a game of Magic. Players build two identical decks and, rather than shuffling them at the beginning of the game, they arrange the cards in their libraries in any order. 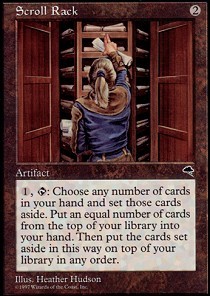 Games of Scheming Symmetry are played like a normal game of Magic with the following changes:

You can play with more than 2 players, but I haven’t tested that. I don’t recommend less than 2, though.

If you and your opponent want to start with a different total, that’s fine by me. It’s your life, after all.

Mirror Mode:
Each player’s deck contains the same cards as their opponent’s deck.

Everyone’s deck list should be identical. I suggest a deck of 30 cards, but any size will work.

The Perfect Seven:
Before drawing opening hands, each player may Scry X, where X is the number of cards in their library.

Put the cards in your library in any order.

* Players may not change the order of cards in libraries when searching. Cards are always put back in the same order after searching.
* If two or more cards would be put into their owner’s library in a random order, its owner chooses that order instead.
* If a card would be shuffled into its owner’s library, it’s put on the bottom of that library instead.

Foresight:
Players may look at the top card of their library at any time.

In theory, players already know what the top card of their library is; allowing them to peek at it just helps players with less-than-perfect memory. 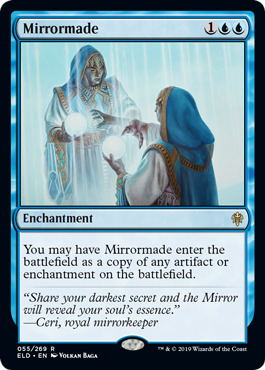 In Scheming Symmetry, players have identical decks. These are typically 30-card decks, but can be any size. You could have one player can build these decks beforehand, or you can build them together using the following method:

1. Ban Cards
To begin, each player chooses up to three cards to ban from the decklist. Banned cards cannot be added to players’ decks, and they cannot be chosen with “wish” effects during the game (like Fae of Wishes // Granted).

2. Pick Cards
Next, players alternate choosing cards to add to the decklist. Each player adds 10 cards to the list, one at a time, for a total of 20. Players may not choose to add banned cards.

3. Add Basics
Finally, add a total of 10 basic lands to the decklist. Discuss as a group how many of each basic land you would like to add (for example, players may agree to add an even split of 5 Swamps and 5 Forests). If no consensus can be reached, alternate choosing basic land cards to add to the decklist until each player has added 5 basic lands.

4. Build Your Decks
Each player builds a 30-card deck using the shared decklist.

Thirty cards is more than enough to play a typical game, and realistically you’ll only ever see the top twenty or so anyway. Adding more cards would add more decisions when players are arranging their decks, but a lot of those decisions ultimately wouldn’t make a difference. 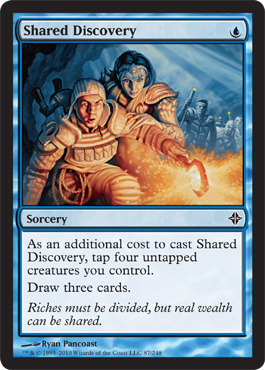 One way of ensuring you have enough copies of each card for everyone to build their deck is to build a miniature “Cube” of cards to pick from. Pick out a dozen or so pairs of cards in each colour that you like, and build your decks using only those cards. This restricts which cards can be added to your decklist, and makes the deck building process a bit more like a Rotisserie Draft. If you’re a fan of playing Limited formats, I’d especially recommend building you decks this way.

To speed up the deck building process, try sorting your mini-Cube into piles by colour, keeping each pair of cards together. With the cards sorted this way, players can pick up a pile and flip through their options in a given colour quickly. Plus, because you’ve kept cards together as pairs, you can easily distribute a copy to each player as the card gets picked.

If everyone agrees, you can instead have players can provide copies of cards from their own collection. Just make sure that your group has enough copies of the cards picked; there’s no sense in adding a Mox Diamond to the decklist if your play group only has one copy.

Scry, Surveil and Impulse-like effects are powerful, since they let players change their plan mid-game.

Mill effects and targeted discard are similarly powerful, since they can seriously disrupt opposing game plans. Self-mill is also a good way to skip over cards that are bad in your current situation.

Combat tricks like Giant Growth make for very interesting games. Since both players have them and everyone knows how many of them to expect, attacking and blocking when mana is still available becomes very dicey.

Avoid including threats that can’t be answered; you might not be the one to cast the threat first, after all!

Sometimes the worse card is the better inclusion in the deck. Bake into a Pie is stronger than Impale in nearly every way, but by opting for the sorcery instead of the instant in the list, you don’t have to worry about playing around it as much. Giving your opponent access to a powerful spell can be dangerous after all, even if you get a copy of it, too.

If you want to add an infinite combo to the deck, try adding a few ways to stop it, too. Otherwise, whoever goes first will almost certainly win.

Make sure you can actually cast the spells you include. If you want to add a card that requires six green mana to cast, you’re probably going to want to include a few lands in your initial 10 cards.

Everyone involved in building the decklist is responsible for making it fun; keep that in mind if you’re planning on adding something annoying. 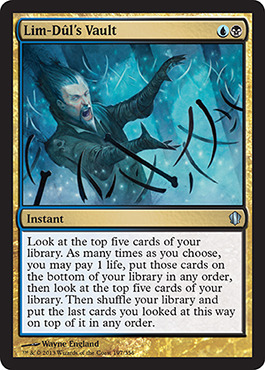 One of the most interesting and challenging parts of Scheming Symmetry is deciding in what order you should draw your cards. Here are a few suggestions:

* Plan out your first few turns, and build an opening hand that can support that plan.

* Don’t draw a card until you can cast it. If your opening hand has three lands, put a land above any spell that has a converted mana cost of four.

* Ten lands is more than enough for most decks to function. Put any lands you don’t think you’ll need at the bottom of your deck; they’re literally the last thing you want to draw in most games.

* Sometimes it’s easier to start by figuring out which cards you don’t want to draw, and then working backwards from there. Not every card is going to fit into your game plan, especially when your opponent built half of your deck.

* Try to save your Scry effects for when you know you want to get rid of a card. Remember, you can peek at your top card at any time, so use that ability to your advantage. 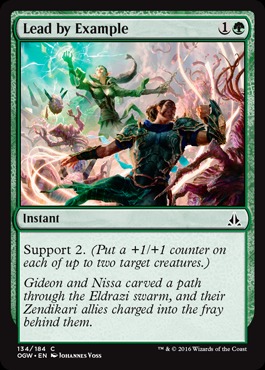 Here are two lists my friend and I put together for Scheming Symmetry. We built them using a mini-Cube I made out of spare cards I had lying around.

If you were playing, how would you arrange these decks?

Our Boros mirror match relied a lot on leveraging Chandra’s Pyrohelix to get a two-for-one, and then setting up a big enough attack with Inspiring Captain to force unfavourable blocks.

In our Golgari mirror match I underestimated the value of an early flier, but managed to distribute and proliferate enough counters from Scrounging Bandar to eventually turn the tide. Also, I didn’t notice at first that my mini-Cube had extra copies of Gift of Strength, but we decided that having two copies of the same card was fine. ALSO also, did you remember that Gift of Strength gives a creature Reach? Because I sure didn’t! 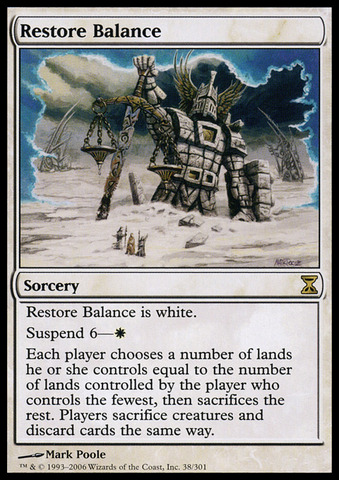 I highly recommend giving Scheming Symmetry a try; it’s fun engaging at every stage, from deckbuilding to gameplay. Building a deck together one card at a time is really interesting, especially when you know your opponent will be using the same cards. Then, once the decks are built, puzzling out your game plan and deciding what order to put your cards in is a fascinating challenge.

What surprised me the most was just how varied the games themselves were; just because you and your opponent are playing with the same cards doesn’t mean you’ll be using them in the same way. It can be hard to predict when your opponent will choose to use their removal or combat tricks, and even harder to determine when it’s right to use yours. 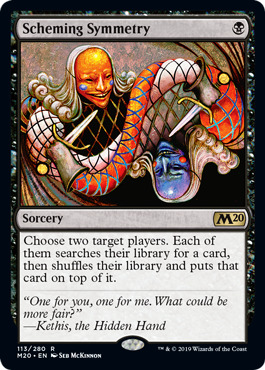 I honestly think you’ll have a lot of fun with Scheming Symmetry; my friend and I are already itching to play this weird new format again. If you do give it a try, I’d love to hear about it! Feel free to leave a comment with what deck you built and how you and your opponent decided to arrange your cards; I’m curious to see what you make.