Magic has always had a close history with Dungeons & Dragons, even long before Adventures in the Forgotten Realms, so it’s not surprising that people would find creative ways of combining the two games. In particular, Magic cards offer a small snapshot into a greater story and setting, which means they’re excellent plot hooks for Dungeon Masters looking for inspiration. These ‘thumbnail stories’ are a perfect jumping-off point, and the combination of art, flavour text and rules can spark so many ideas. It’s one of the big appeals of the game. 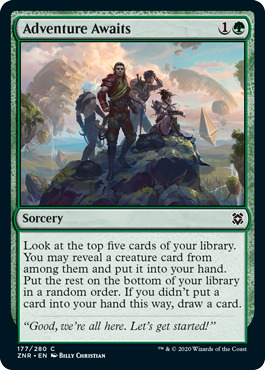 But which cards do you pick to build your adventure? You could certainly take a random approach and blindly draw cards from a box of bulk, or pick a random card from Scryfall. You might prefer to crack open a booster pack, or maybe you’ve organized your cards into categories and plan to draw randomly from there. There’s really no wrong answer. Still, you might want something a bit more cohesive. In fact, you could just as easily base your adventure off of your favourite deck list.

For the sake of example, let’s use a Modern Burn list.

Basic Burn on a Budget

Deck by By Adam Yurchick

With our deck ready, let’s shuffle up and build an adventure! 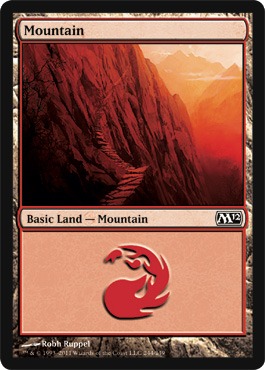 This’ll be easy. Our adventure takes place in the mountains. 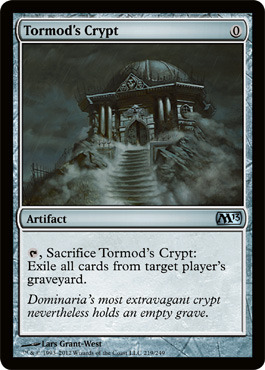 A Goal. We want a reason to be here. The lure of treasure is a good starting point. Let’s look through various artifacts.

There’s not much to choose from in the way of artifacts in this deck…. It looks like the party is searching for the entrance to an empty crypt. Perhaps there’s the key to stopping an ancient evil hidden within. 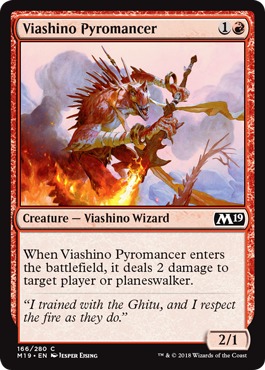 A Major Threat. This is very open-ended, but we’re looking for some kind of big monster or evil mastermind. Whatever it is, it should be the set piece to the adventure. What’s stopping the party from achieving their goal? We probably want this to be a big combat. Let’s choose a creature with a high mana value for that.

Ok, so we don’t have much in the way of “high mana costs” in this deck. Looking at the creatures available, it looks like our arch villain will be a lizardfolk pyromancer. Cool. I wonder what they’re up to? 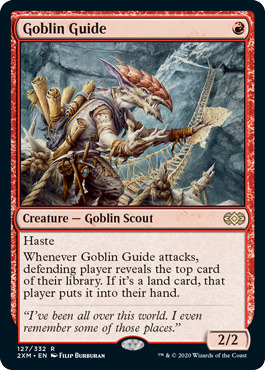 Small Encounters. Let’s flesh out what we have with some smaller threats. Now that we have a location, a goal and a villain, we can pick some suitable lower mana value creatures to populate our map. These might be minions, guard patrols or local fauna. The party will likely run across several of these foes during the adventure, so we’ll want to pick a couple for variety.

There aren’t many creatures in this deck; the party will end up facing a spear-wielding monk, and a goblin who is suspiciously eager to show them the way to the crypt. I’m sure that’ll end well. To flesh things out, we may want to turn a few of these burn spells into elementals; with a pyromancer in the area, a living Lava Spike would fit right in. 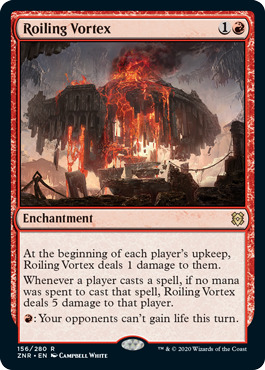 A Challenge. It’s nice to mix things up so our adventure isn’t just a series of combats. This challenge could be an obstacle to get around, or a puzzle they need to solve. Ideally, we want something the players can approach in a few different ways. There are countless options, but let’s pick an enchantment as inspiration.

There’s only one enchantment to choose from in this deck, so we know the players will be navigating around a dangerous, roiling vortex. I’m imagining a whirlpool made of lava and a collapsed bridge….

Other Hazards. While our challenge is the intermission between combats, we want to keep the players on their toes throughout the adventure. What small, non-combat problems might they encounter along the way? Let’s pick a couple of instants and sorceries to use as traps.

Now this is what this deck is all about! Intermittent bolts of lightning, molten fissures and showers of lava falling from the sky will have the players regularly diving for cover.

Putting it All Together

Once we’ve figured out the elements we want in our adventure, we need a way to organize it into something coherent. We can do this in a few different ways, but broadly speaking there are two approaches: we use a map-based structure or a narrative one. These end up in the same place, but get there from opposite directions.

We’ll have to tackle that next time, though. I still have some prep work left to do for my other campaign!