While everyone is getting excited over World Tree God combos and two-turn wins with Tibalt’s Trickery, I’ve been focusing my efforts on Historic, with the help of a new uncommon from Kaldheim: 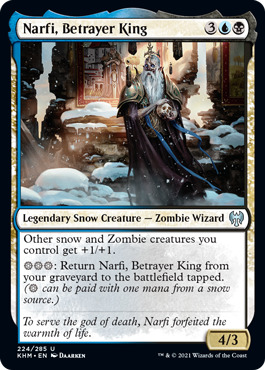 If Narfi is a king, why doesn’t he have the Noble creature type?

Narfi, Betrayer King is the blue/black legendary creature of the set. He’s a 4/3 Snow and Zombie lord with a rarely-seen activated ability. It’s not every day that we get a creature that returns itself from the graveyard to the battlefield, and when we do there’s usually a high cost or restriction associated with it. Narfi ignores all of that, and only asks for three snow mana to keep coming back over and over from death. Granted, a 4/3 Zombie Wizard isn’t the biggest threat in the game, but Narfi‘s activated ability makes him incredibly resilient. Exile effects are obviously very effective against him, but the Betrayer King bounces back from most removal spells in Historic. The only trouble is figuring out what cards to use alongside him.

When I first saw Narfi during previews, I imagined building a green/black self-milling shell for him, with something like Grisly Salvage or Satyr Wayfinder to dig through the deck. Unfortunately, neither of those cards are in Historic, so I had to look elsewhere for a solution. (Maybe when it’s safe to play paper Magic again I can build a Golgari Snow deck for Modern or Pioneer?) In the meantime, I searched through my options in Historic, and landed on a collection of self-milling Zombies, including Stitcher’s Supplier and Mire Triton. Not only would these creatures help get Narfi into the graveyard, but when reanimated, he would also buff them! This seemed like a great start, so I put a quick list together. 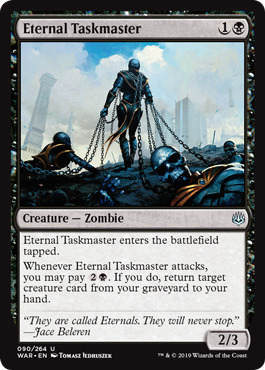 I wanted to avoid using too many rares to start, and ended up going a bit overboard with the idea; what I put together ended up being an unintentional Artisan deck, containing only commons and uncommons. When picking cards, I was inspired by Pauper Zombies lists, hence the Lazotep Reavers and Ghoulraisers. I was initially using more Zombie lords, but I found that I wanted to lower the curve and get bodies onto the battlefield sooner, and the lords cost too much mana. Overall, this list was alright, but I found that it really struggled to close out games when the opponent got ahead. It did do a decent job of reanimating a Narfi from the graveyard, but even when it pulled that off the deck lacked any sort of oomph. In particular, I found that this list quickly crumbled to the multitude of Uros and Ugins floating around in the format.

After getting absolutely destroyed several games in a row, I decided to switch gears entirely. I ripped the deck in two, removing all of the mill creatures and most of the cheap zombies, replacing them with as many removal and discard spells as I could find. The only trouble was figuring out how this new version of the deck would get the Betrayer King into the graveyard without milling him. Of course, my only other option would be to discard him, but with what? 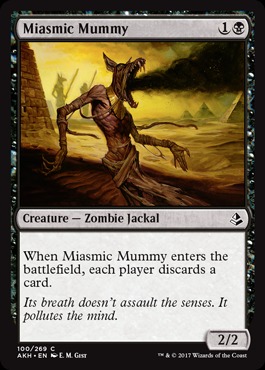 I liked the consistency of my initial mostly-mono-black mana base, so that meant staying away from red discard spells like Thrill of Possibility and Fissure Wizard. I did find, however, that of the Zombies in the initial list, Miasmic Mummy performed fairly well. The little bit of disruption it provided was handy, and curving the Mummy on turn two into Narfi on turn three felt pretty good; a 4/3 and a 3/3 would make for a quick clock, and my opponent would already be down a card. If I could hit them with a turn one Duress it would icing on the cake.

Inspired by Miasmic Mummy, I looked at my collection for any other creatures that discarded cards. While I would have liked to include something like Sibsig Icebreakers to further attack my opponent’s hand, I had to contend with a pair of low-mana heavy-hitters instead. I happened to have two copies of Sparkhunter Masticore and the Arena-only Mardu Outrider sitting in my collection, and both of them require you to discard a card as an additional cost to cast them. While normally this would be a major downside, being able to toss a Narfi into the graveyard immediately turned that drawback on its head. Neither one of these creatures is a Zombie, but a 5/5 Orc is still bigger than most creatures in Historic, and the Sparkhunter is a decent answer to planeswalkers.

I kept tinkering with this version of the deck, experimenting with discard spells like Skull Raid and even Reaper of Night, though I eventually found those cards to be too slow. Even with Sparkhunter Masticore, I struggled for a while to deal with the endless stream of planeswalker decks I was encountering, which drove me to reevaluate my removal. This worked out better than I expected, since it drew my attention to a Throne of Eldraine classic: Murderous Rider. It’d been a while since I’d played with this adventurous Knight, and I completely forgot that it existed; I think the last time I used it was in my mono-black Pioneer list, and I haven’t been able to play with that deck in over a year! Regardless, it’s actually a perfect fit here; not only is Murderous Rider a good removal spell, but the Betrayer King buffs it into a 3/4 lifelinker because it’s a Zombie.

I broke down and spent some rare wildcards for a full four copies of the dead Rider, and it was well worth it. I also decided to add a second Languish while I was at it, having already picked one up for Gladiator a while ago. It’s unfortunate that this mass removal spell kills most of my creatures (the 5/5 Mardu Outrider being the exception), but it’s worth using anyway. Languish has proven its worth several times already by clearing away swarms of Elves and Goblins; I tried using Yahenni’s Expertise for a while, but only shrinking creatures by -3/-3 ended up being a bit of an issue, and I wasn’t exactly taking advantage of the free spell Expertise lets you cast. 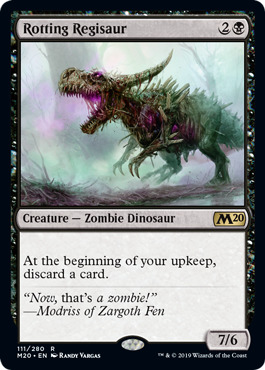 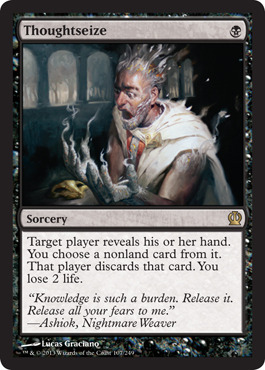 Looking at the revised list, it would probably benefit from more rares, if I wanted to spend the wildcards on it. Rotting Regisaur would probably be a good alternative to Sparkhunter Masticore or Mardu Outrider (or both), and as much as I hate Thoughtseize, it would be better than Duress most of the time. The mana base could also benefit from some Faceless Havens to give the deck more to do when it floods out, and the Haven would still allow Narfi to come back on turn three. Faceless Haven is even a Zombie when it activates (as well as being a Snow creature), so the Betrayer King would even turn it into a 5/4!

That said, the deck still has a lot to offer in its current state. Cling to Dust, despite being a one-of, is an engine all by itself, and while Discovery is mostly there to filter my draws, I’ve bounced quite a few things with the Dispersal half when drawing it in the late game. As for my lands, other than swapping a couple of Snow-Covered Swamps for the aforementioned Faceless Havens, I don’t think I’d make any more changes. As handy as Castle Locthwain can be, this list doesn’t really want more than one; it can’t be used to bring back Narfi, and I’d much rather return a 4/3 to play in most games than draw a random card. This deck really requires you to manage your hand and life total carefully, given how easily it can deplete either one if you’re not careful, and the life loss from the Castle really adds up. It’s good for those times when you’re digging for a removal spell, but even then it’s more of a panic button than anything else. 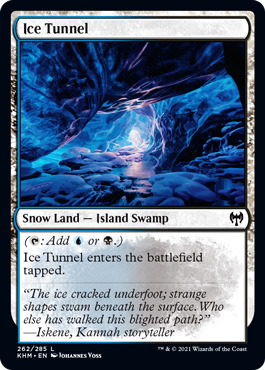 I’ll probably keep tinkering with the deck moving forward. As I open more Kaldheim packs and get more rare wildcards, I’ll look at trying some of those improvements. As it is, though, the revised deck is pretty fun, and manages to hold its own. I’m not going to break Historic any time soon with it, but I’m glad I’ve tried a few things with Narfi; he has a lot of potential to be a solid, resilient threat in Historic. If it wasn’t for all of the powerful Escape creatures already in the format, I think more eyes would already be on the Betrayer King.