Way back in ancient times, when Rants of Valakut was just starting, I wrote about my Peasant Commander deck. The deck was a labour of love, built entirely out if commons and uncommons that I had either drafted or opened in booster packs. It was a blue-black deck under the command of the only card I specifically purchased for the deck: one Sivitri Scarzam. 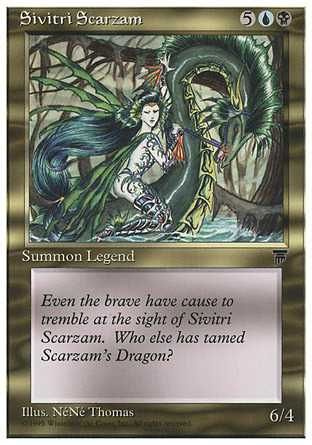 Now, Sivitri is not a great commander, as much as it pains me to say. A seven-mana 6/4 with flavour text doesn’t exactly hold up against the field, especially these days. When I chose her to lead the deck it was really for two reasons: she was in the right colours for what I wanted to build, and she was the only non-rare option available to me at the time. Yes, Ramirez DePietro was around as an alternative, but my local game store only had Sivitri Scarzam. I honestly enjoyed having her in the command zone, but in all honesty I almost never cast her. 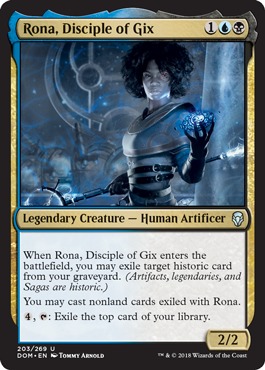 Fast forwarding several years, Magic introduced a whole new cycle of uncommon legendary creatures in Dominaria. Included in that cycle was Rona, Disciple of Gix, a new blue-black legendary creature with a much lower mana cost than Sivitri Scarzam, and with multiple useful abilities. When I saw the card I was intrigued, but it wasn’t until I opened a Rona that I was completely torn. I could switch out my commander, and if I did my deck would finally be made up entirely of cards I’d opened or drafted, which really appealed. The problem I faced was that by doing so it would mean saying goodbye to the deck’s original commander, the very first card I put in the deck. We’d worked together for years, after all; didn’t I owe it to Sivitri to keep her around?

I decided that it wouldn’t hurt to at least try Rona out for a few games. I apologized to Sivitri Scarzam and sleeved up the new card. Along with the temporary change in leadership I decided to make room in the deck for a handful of artifacts to help with Rona‘s enter-the-battlefield ability; they were good cards on their own, which I was considering for the deck regardless, but their primary purpose was to give Rona a few targets to get back from the graveyard.

It didn’t take long at all for me to see how much better the deck fuctioned with Rona, Disciple of Gix at the helm. Like I said, I basically never cast Sivitri unless I was desperate for a creature to play, but by constrast, Rona was hitting play regularly, and she was even helping me grind out extra value each time she did. Sivitri stayed in the deck box as a sort of advisor, or alternate commander if I was feeling nostalgic, but now that I had Rona to build around I started making more tweaks to synergize with her. In went a Saga and some more artifacts, and once War of the Spark came out I even found room for some of the uncommon planeswalkers I opened from that set. 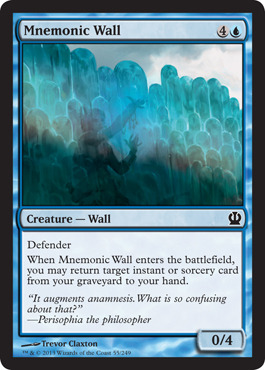 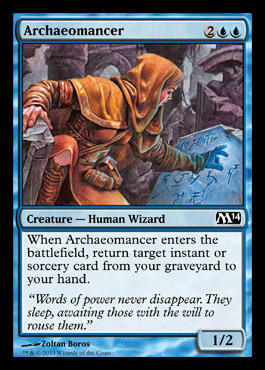 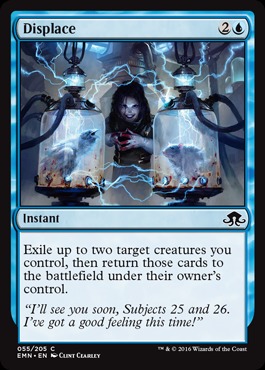 I also started making tweaks to my deck based on one of the combos frequently seen in Pauper: Ghostly Flicker and Mnemonic Wall. The way the combo works is that you can use Ghostly Flicker to blink Mnemonic Wall and a second permanent in and out of play, ideally another card with an enters-the-battlefield effect, like Mulldrifter. When the wall comes back onto the battlefield it can return Ghostly Flicker to your hand and start the whole loop again. So long as you have three mana available you can keep doing this as much as you want. Archaeomancer and Possessed Skaab can take the place of Mnemonic Wall in the combo, and Displace is a suitable backup for Ghostly Flicker. With all of the card draw in the deck already, putting the combo together isn’t that unlikely, either.

My deck was already running Mnemonic Wall, Archaeomancer and Possessed Skaab for value, so the inclusion of Ghostly Flicker and Displace just made sense to me; I had copies in my collection from ages ago, so I just had to dig them out. What I liked about these cards was that even in games where I couldn’t put the combo together, the Flicker spells synergized really well with the rest of the deck, including its new commander. This made them quite appealing in general, but as part of the combo they were great. What really threw me for a loop was that but by including the combo my deck I suddenly had a strong endgame to work towards. This was entirely unexpected; my deck had somehow gone from a pile of card advantage and counterspells to a surprisingly synergistic deck; I’m not sure if it was Rona‘s influence, or if the deck was just naturally heading that way over time, but I think she certainly helped.

I’ve said it before, but I generally don’t like replacing my commanders. They’re always the starting point of my deck, and are at the centre of its identity. They’re the first creature I see every time I open the deck box, and the last one when I put everything away. They’re a familiar face, and one that I can trust to fight by my side. I’ve had some of these commanders at the head of my decks for years, and I know it’s silly to say, but I feel like I owe them something for their loyalty. That’s why it’s so hard for me to change them. That said, every time I’ve swapped out the commander of a deck, the list has always ended up being better for it. It’s never something I will do lightly, but I should probably be willing to try it more often.

After all, you never know; your commander deck could really thrive under new management.