Hey all, welcome to the 7th episode of Salt Road Patrol. Only 3 points today but I have a lot to say about them, so let’s go:

Now I’m probably gonna get a lot of hate for this but whatever, it’s 2017 and I get an opinion too. I don’t understand the hype around the frontier format. People love new and shiny things I suppose but I personally don’t see this going anywhere. I have a lot of problems with the frontier format. The first is why do we even need a new format? We already have plenty of formats available to play and the more formats you add the more you dilute the player base from each other format until you have no one left to play with. Legacy is feeling this struggle immensely in a lot of areas of the world. Don’t say they can all live together, the fact of the matter is that a large portion of regular MTG players can only make so much time per week/month/whatever to play magic, and when it comes to that as it often does, they have to make a choice about which format do they want to play. People have things to do, they gotta cut the lawn, gotta watch the baby, make a family dinner, attend their WoW raids, whatever. Most people can’t play Tuesday Frontier, Wednesday Commander, Thursday Modern, FNM, etc. They get to pick 1 or 2 and that’s it.

So when you introduce frontier that’s a potential draft that won’t fire on Friday, or a potential round 1 bye for Tommy who showed up with his sweet new tribal crabs package in his Commander deck that he just wants to play with. My other problem is that eventually over time Frontier is going to have the same problems that people have with modern. Oppressive decks will arise, card prices will skyrocket and stay there, etc etc. Everyone claiming it’s a low barrier to entry format are delusional because eventually you will be locked out by the price tags like you are for any other non-rotating format. The nice thing about standard is when you’re sick and tired of getting your butt handed to you by mono Black devotion or Rally they eventually rotate out and you can bid them good riddance, but hey welcome to Frontier where all the decks you all complained and whined and cried about are legal and now you’re unoptimised self-proclaimed “sweet” brews can get decimated by them all over again!

Seriously every time a set rotates out all you hear about on the internet is the giant collective sigh of relief people go through about not having to play against card x anymore. Well they’re all legal again buckos, enjoy your stay. There’s tons more but we can take this to the comments or hit me up in person some time and we can go for a salt rant over a beer.

So recently something happened that hasn’t happened in about 6 years: Cards were banned from standard. As per usual people freaked out, which I don’t think you can truly ever avoid but it still makes me salty regardless. People in these situations for some reason think they’re the gurus of game design and card game format balance and often bash Wizards for their decisions, which I really don’t understand. Who’s better at designing and balancing a card game: A team put in place who has been doing it for years and years, or Joe Schmo who digs holes for his dad’s railway contracting company and spends his free time grinding clash of clans in the work truck?

Some people must honestly think the team at Wizards just shuffles up 1 of each standard legal card and pulls one out to ban. They haven’t banned a card in 6 years, do you think the decision to ban reflector mage was taken lightly? If you haven’t figured it out yet, that’s pretty much all I’m really talking about, because Emrakul and Copter make sense right? Emrakul was not fun to play against, really wasn’t all that fun to play with, and was pretty broken when you were cheatcasting her into play with Marvel. Copter was like, pretty strong but also really dumb in that it didn’t have any colour requirements so nearly every deck had to play 4 copies of it.

Pretty boring deck design decisions when your deck can realistically contain 56 cards a large portion of the time. But reflector mage was the one from left field and that’s the one people are freaking out about. I’m sure once people start playing the format they’re going to be glad Reflector Mage bit the dust, it’s not fun to play against, it severely limits card play ability (How bad is card X if it gets bounced by reflector mage? Abysmal? Not playable now, sorry pal) and it was seeing a lot of play in a very strong deck so that I guess didn’t bode too well for it either. But hey, if you’re in the market for getting your 5 drop bounced to your hand and not having any good plays now going into turn 6, I heard there’s this hot new format called Frontier, if you know, you really want to get that experience. Oh, and bonus, they can do that at instant speed for 4 mana while also putting another creature into play. Sounds fun yea?

Oh, and a short aside on this, because I don’t think it deserves its own paragraph but it’s related. MTG cards are not an investment. They are pieces of cardboard with some paint on them, some of which are worth ridiculously more than others. If the value of your cards have been severely diminished due to a banning: suck it up. This is really no different than anything else you own go up or down in value due to some other outside factor. Every time something gets banned, I see wave after wave of people posting about how their deck and cards are now worth nothing and how wizards owes them money blah blah blah. It is a game, you spent (hopefully) disposable income on a game. These aren’t mutual funds or 401ks, they are pieces of cardboard, with paint. If you can’t live with the fact that the value of your cards could all of a sudden drop to 0 overnight, however unlikely it may be, then find a new hobby, because that’s the world we live in. 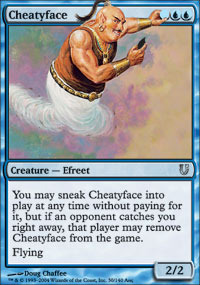 Cheaters are by far the worst type of magic player, for tons of reasons. I can honestly look past the Lantern Geniuses, the twitchy Burn players, the Cringey Control pilots, the Salt Generators, the uncoordinated time-wasting Combo players, and the Gotemers. I could forgive them all when you put one of these freakin people in front of me. I hate cheaters for probably a million reasons but I can only list a few. First and foremost, and I cannot stress this enough, this is a game. A card game. Some might even call it a children’s card game. You are cheating at a children’s card game. What sort of unruly, despicable, dumpster twists and turns has your life taken where you have to intentionally cheat at a children’s card game? Seriously there can’t be a good answer.

The only decent answer, which is still wildly and absolutely unacceptable, is that there’s some huge prize at stake, but there never is. Even if you were playing in the finals of Worlds, that doesn’t come close. You’d have to be playing for the survival of the human race in my books to make it worth it and I still think I’d look down on you, filthy scummy cheater. Yet people do it. The sick thing is I’ve probably been cheated hundreds of times and not known it. Admittedly I don’t do a very good job of watching my opponent go through the physical actions of resolving things, and I’m sure they’ve drawn extra cards, cast things for less mana, etc etc. There’s just no good reason for it. Cheaters also think for some reason that they’re better than the person they just beat, even though they just cheated. They think they outplayed them. They think their opponents are dirt.

Clearly they must be because you wouldn’t cheat vs someone you respect right? That’s the thing though. When you play this game, you’re very often playing with the same people over and over again right? It’s not very often you go to your LGS for FNM and get paired up against someone you’ve never played before every round. More often than not, these people become your friends, because you share the same interests as them. And now you’re cheating them you disgusting scumlord. There are actually idiots who cheat on camera at the pro tour, can you believe that?

Actually to top it all off, there was a guy who was doing some play testing on a stream vs a well-known magic player named Jeff Hoogland. This guy’s name was Ryan Hipp. He Cheated. On camera, in a practice/playtest game, with nothing at stake. He kept a greedy 1 land hand, shuffled his deck and put a basic on top (he was playing against burn) didn’t offer his opponent the deck to cut/shuffle. To make things infinitely worse, he drew and played the basic, and said “doing it”. Holy smokes I’m beyond tilted right now. Jeff’s comment and that video can be found here.

I could go on for a while, but I think I’ve made it clear: Cheaters are the worst type of player in this game and any game. It’s sad that we have to play this game so defensively, as in having to watch our opponent with what they do, cut and shuffle their deck, etc, but that’s the unfortunate reality when you have cheaters in the game. I hope everyone reading this takes the same stance, and if you ever catch someone cheating, tell a judge and try your hardest to get them banned. The less of them the better.