We’ll, I’m back, got my lunch pail, my hard hat, and my pick-axe, I’m ready to venture down in to the Salt Mines once again. So follow along, misery loves company, and if I crush myself under the weight of my own salt, I’ll need an evac crew! For anyone who has played any level of competitive Magic, they know this guy. It’s your regular Thursday Night Modern. 4 Rounds, minimal prize, it’s just for fun. Working at a game store and judging these casual events, this guy pops up from time to time.

It usually starts out the same way, “JUDGE!” like they’re yelling for you at an understaffed GP. You casually walk over and Spike tells you that his opponent didn’t untap his lands and it’s his main phase one so obviously he floated all of his mana in his upkeep. Hello? Is this real life? After I unmercifully let his opponent untap his lands he then gives the guy a speech about how, “at a real tournament, that’s how things are”.

Hello? At what point did this guy get this memo? You know these guys, it has been ingrained in them that to be good you must literally take no prisoners. Newsflash, that’s not how things work in 2017. This isn’t 1998 where it was more important what strong arming techniques you knew than what deck you played.

If you’ve never seen the following graph, it speaks volumes in this context: Try to take this into account next time you decide to try and rules lawyer a guy at his first FNM please and Thank-You.

2. All Magic Stores are not Evil! Every few weeks you see it:

“Jim’s Hardware Tackle and Magic shop cancelled my order of 35 Hazoret’s at $2.50 they deserve to burn”

“Billy’s Ice Cream, Popsicle Stand and Magic Store just told me they aren’t shipping me the 79 copies of Earthshaker Khenra I bought right after Round 6 of the PT because Bill said he was up late churning ice cream or something and wasn’t awake at 5am, they deserve to have their license revoked and Bill should have to give us all 79 Earthshaker Khenras!”

But, the vast majority of the time, overselling happens, inventory error happens, I understand at all points the pitch-forks are at the door waiting to go into action, but can we at least give these tiny little stores the benefit of the doubt once?

Like I said, bad Magic stores exist, and they deserve to be outed, but the up roar that people get into because the sick “spec” they thought they “got” someone on was cancelled. Do you ever notice that almost every single one of the burn em at the stake posts has the person ordering more than a play-set of a card that spiked hours ago? People are just trying to get their piece of the pie, sure I get that, but for every other lollipop stand you were able to order 19 Saheeli Rai’s from before Ralph, from Ralph’s 1 man Bake Stand and Magic Mart was able to drop his kid off at school and then change his prices there is going to be one guy who is going to say “%&#$ it” and not comply with getting gouged.

This is obviously going to be a point of contention with a lot of you, which is fine, I’m looking to drum up some controversy, so let me know how much of an idiot I am in the comments. I’ll be waiting! Ah, let’s keep the hate train rolling shall we? Do you know another name for a Legacy specialist? I do, it’s “Bad at Magic”. Magic is Magic, think what you will about skill level and decision trees, Magic is a hard game. And, let me let you in on a little secret, it isn’t that Legacy is “harder” or more “skill-intensive” it’s that it simply moves the decision trees. In legacy, match-ups matter, cards in hand matter, the stack matters, but I’ll tell you what normally doesn’t matter, the actual board.

(My board consists of 2 lands and a Delver of Secrets, my opponent has an Iona set to blue and a Tidespout Tyrant, I’ve got him right where I want him)

Compare this to Limited or Standard where the board is the most important thing, and instead of leveraging match-ups and cards in hand, you simply move the decision trees to leveraging on-board presence.

“But Austen, that proves your point, you just slam mythics back and forth in Standard!”

Right, Show and Tell isn’t a mythic, Sneak Attack isn’t a mythic, Tabernacle at Pendrell Vale isn’t a mythic. Below are 2 cards, without looking at the rarity, tell me which one you consider to be the “no skill just slam busted mythic”

Both require a great deal of skill to operate properly. One’s skill is determined by when you put it on the stack, the others is determined when you use one of its abilities. Because let’s be real, it doesn’t take Jon Finkel to put Show and Tell on the stack.

I have no problem with Legacy, I think it’s great, what I have a problem with is the people who treat it as this perfect world that is superior to every other format. No, it’s an illusion, the decisions aren’t that much more difficult, they are simply moved to places where they simply look like they are more difficult. Magic has a stigma that if you attack with creatures you are a noob. Well Paulo Vitor Damo Da Rosa just won 40K attacking with red creatures, is he a noob? That stigma is long dead my friends.

I’ve been to 2 SCG Legacy opens in my Magic Career and in the first, where Match 1 Game 1 was my very first game of Legacy I went 6-3 good for top 64 and in the other I was 4-2 and had to leave due to my ride. I am by no means good at this game and I was winning RUG Delver mirrors that were supposedly quite skill intensive vs actual Legacy Specialists. I even got told before one of my matches that my opponent felt that:

This guy then proceeded to try and T1 Reanimate an Iona with no back-up, that rests my case I think.

4. People Caring That Contraptions will be Silver-Bordered 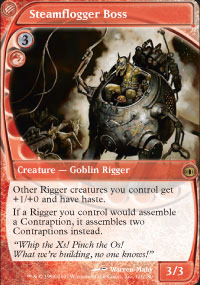 Newsflash to the 67 of you. NO ONE ELSE CARES. Newsflash to the 35 of you that “specced” on Steamflogger Boss. Did you honestly think that was going to pay off? Honestly? Like seriously look in the mirror, and ask yourself

“Did I really think I was going to win on Steamflogger Boss like it was Apple Stock in 1996”.

Now that we’ve completed that simple exercise, let me ask you this. Does any of this matter? There was no way Steamflogger Boss wasn’t going to be bad, even it if was printed along with his rigger/contraption buddies in black border. Has there ever been a play-able/semiplay-able Goblin Mechanic? Ever? Seriously? Like sure, Goblins have been good, on their own. But has the tribe mechanic or theme for Goblins ever been a powerful one?

Like come on people who care about this (I know it’s only 67 of you but still). In Onslaught block, every “pay-off” goblin’s flavour was that it killed all the other goblins. 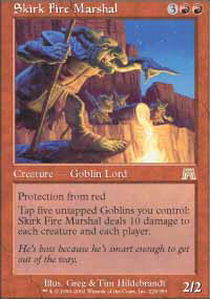 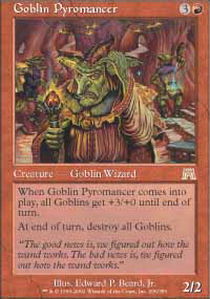 Goblin mechanics are the running joke of Magic history. People say it’s a cop out, or whatever, but you know what. This now allows Riggers/Contraptions to actually be really cool rather than just be some useless throwaway fun mechanic. Actually, you know what, that may have been a better idea, as people may have gotten even more upset at that prospect.

I’m done for this week. I hope I got you guys as fired up as I am, please comment, lease tell me I’m an idiot, all it does is fuel the fire I have burning deep inside me!