As a Commander player, I can say that I have encountered a host of issues my local playgroup. Players explore new deck archetypes, commanders, and super secret tech regularly, and sometimes someone will key in a strategy that takes the local meta (be it a single playgroup or LGS) by storm.

Fortunately for us, Commander as a format is far from solved. There are thousands upon thousands of tools that are available to us as deckbuilders to combat the dominant strategies in our local metas. As a general rule, this involves identifying your own deck’s strengths and weaknesses, and comparing them to the strengths and weaknesses of the decks you’re likely to play against on a regular basis.

Let’s explore this concept using an example from my past.

A few years ago I was running this in a semi-casual meta.

The idea behind this deck was to win through creature combat. In the first 6 turns or so, I would be dropping low-to-moderate threat creatures like Akroan Hoplite and Signal Pest, equipping them with a small suite of equipment that provided effects that triggered on attack. Once I hit my sixth land drop, I would cast Aurelia and swing with the team, stacking the benefit from the on-attack effects. My most potent creatures were Archangel of Thune, Hero of Bladehold, Malignus, and Markov Blademaster. 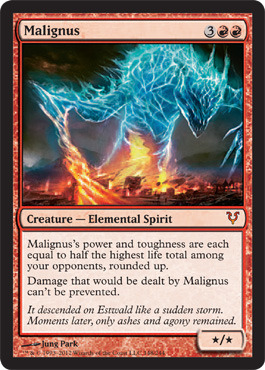 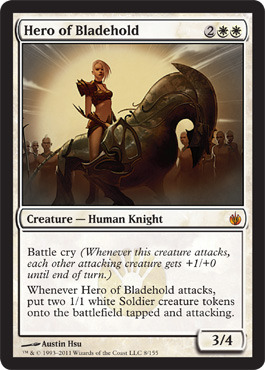 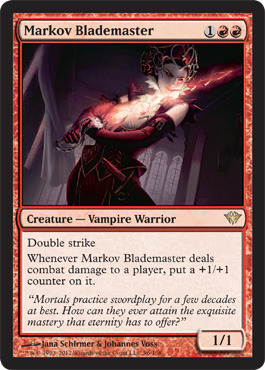 The deck that was dominating my local meta at the time was a BW goodstuff deck headed by Obzedat, Ghost Council. The deck’s game plan was to keep the board relatively clear in the early game with things like Fleshbag Marauder, Angel of Despair and Ashen Rider while ramping with Crypt Ghast, Urborg, Tomb of Yawgmoth / Cabal Coffers, and Liliana of the Dark Realms. The deck was heavy on tutors, which were used primarily to grab Necropotence or the pieces of his combo or dig for responses like spot removal and boardwipes. While tutoring, he would gain a bit of life via Divinity of Pride and Whip of Erebos to keep himself alive long enough to close out the game. In the late game he would finish off the table with either the Sanguine Bond / Exquisite Blood combo or with a massive Exsanguinate.

This was extremely difficult for me to deal with. The life gain was just enough to add a turn or two to the game, and instant-speed spot removal like Swords to Plowshares and Path to Exile kept Aurelia off the board. In a deck that was already pretty lean on lands, Aurelia being removed twice was essentially a death sentence.

It would be really easy to complain about how broken Necropotence is, or how tutors go against the nebulous and subjective concept of the “spirit of Commander” – but why would we bother wasting time on that? It’s time to get to work.

What we need to do is identify our deck’s strengths and warp the game to make them more effective.

What are the strengths of a Boros aggro deck?

Boros aggro as an archetype doesn’t get a ton of respect in Commander. The colour combo has a lot of tools to pump out a ton of damage in the early game, but usually loses steam before it can hit the magic number – 120 (40 life x 3 opponents). Turn 6 and 7 – right when an aggro deck should be finishing its opponents off – is quite often when opponents stabilize their boardstate with blockers, or when more than one opponent is able to draw into a wrath to stop the bleeding and reset the board.

Most Boros decks will use this to their advantage by going with a Voltron strategy that wins through Commander damage. This brings the magic number down from 120 to 63 (21 commander damage x 3 opponents), which is something that is entirely attainable by turn 6 or 7.

Other Boros decks will see that the deck’s main threats are efficiently costed and go the Mass Land Destruction (MLD) route. If you can constantly keep the game in a state that looks like turns 1-6, you can prevent your opponents from ever utilizing their late-game strategies. I, personally, really like this strategy when it’s used effectively by a good deck pilot, but it’s not for everyone. I’m going to revisit this idea in a future case study.

It’s said that there are only three things that are certain in Magic: Death, Taxes, and White Weenies. The last strategy – which is the one I settled on – was to go wide. This strategy takes advantage of multiple, efficient, low-costed threats that get around blockers and often generate tempo when opponents use their spot removal on them. A tight, low mana curve makes the deck resilient to boardwipes.

What are the weaknesses of a BW goodstuff deck like Obzedat?

The deck controls the board primarily through spot removal. Distributing threats over a larger number of permanents through a White Weenie strategy makes it much more difficult to keep the board entirely clear of threats.

The deck is packed with tutors to ensure consistency of late game finishers. Exsanguinate and Exquisite Blood/Sanguine Bond were the linchpins to the deck. Early pressure forces people to burn tutors on responses rather than finishers, which can often leave them topdecking for their wincon even once they’ve stabilized.

The deck has a low creature density, which can make it vulnerable to all-in creature combat strategies. Without a ton of blockers, the way is essentially clear for anyone who wants to Assemble the Legion and get in there for big chunks of damage.

Do we tweak the existing deck or start from scratch?

In this situation, I felt it was better to tear it down and start from scratch. I needed a deck with a much lower mana curve that synergized with a distributed threat (wide) strategy. In these situations, I like to try to reuse whatever pieces I can, so the new decklist shares a very similar manabase as well as some of the same finishers.

Eventually I settled on Anax and Cymede as a Commander. Plenty of people would have gone with Jor Kadeen, but I really liked the challenge of building this deck. It’s not the typical token strategy you’d expect to see in a White Weenies deck, but it accomplishes my goal of going wide while taking advantage of some of the more obscure sources of card advantage in Boros.

The most important thing – right off the hop – is that the average converted mana cost (ACMC) of this deck is 2.62. That’s almost about 30% lower than my Aurelia list!

With this suite of creatures, spot removal by itself simply isn’t good enough. By capping the creature curve at 4CMC, we ensure that nearly every creature you could possibly draw at any point in the game is castable.

Now let’s talk a little about what this deck actually does. Anax and Cymede has an ability that gives all creatures you control +1/+1 and Trample until end of turn whenever it is targeted by a spell or ability you control. The obvious strategy is that you want to be targeting it with more than one spell per turn to take full advantage of it. That can be easier said than done in Boros colours due to the previous issues I talked about with card draw. Without preparing for this, you’ll end up with an empty hand and a few soldiers whose buffs will wear off at the end of turn.

I chose to mitigate this by including a fairly significant suite of auras. Each one serves essentially the same purpose – protect a creature from one thing or another, make it hit harder, or trigger Heroic efficiently. The most effective auras in this deck are Crown of Flames and Ghitu Firebreathing, which can be cast multiple times in the same turn, closely followed by Mark of Fury, which can be cast once per turn for a similar effect.

You’ll probably also notice Destructive Urge in there. I know I said I was going to shy away from Land Destruction until future articles, but the card is incredible at forcing an opponent into unfavourable blocks when it’s attached to creatures with Double Strike and/or Trample. This thing can close out a game by itself when it’s attached to Prophetic Flamespeaker. In the case of Obzedat, it forces my opponent to choose between blocking with utility creatures like Crypt Ghast, or forcing him to sacrifice lands, which prevents him from taking full advantage of Crypt Ghast’s ability. Price of Glory serves a similar role by destroying the non-basic lands that facilitate his wincon without going all in on a MLD strategy.

The last thing I was able to do with this list is include a small package of cards that synergize with a heavy enchantment theme. Kor Spiritdancer, Mesa Enchantress, Ajani’s Chosen, Monastery Mentor, and Serra’s Sanctum provide card advantage, tokens, and fuel for this deck, and I’m never unhappy to draw them at any point in the game.

One gamble that I took with this deck is that aura strategies sometimes backfire, allowing an opponent to gain card advantage through effective use of spot removal. Having two or three auras attached to a creature feels great when you’re attacking, but not when an opponent’s Path to Exile becomes a 4-for-1 trade. With this in mind, I included cards that grant protection and trigger heroic like Emerge Unscathed, Bathe in Light, and Apostle’s Blessing, as well as Replenish as a way to recur my auras if they ever hit the graveyard.

Perhaps the most devastating pair of finishers in this deck is Ogre Battledriver and Monastery Mentor. When both are on the battlefield with Anax and Cymede, each noncreature spell I cast creates a creature with Haste, Trample and Prowess. This means that I can spend 5 mana to cast-bounce-cast-bounce-cast Crown of Flames on Anax and Cymede to create the following boardstate: 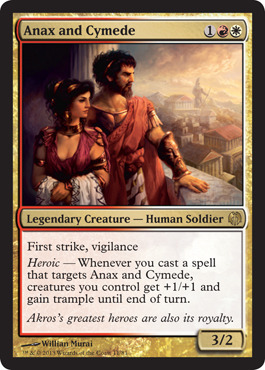 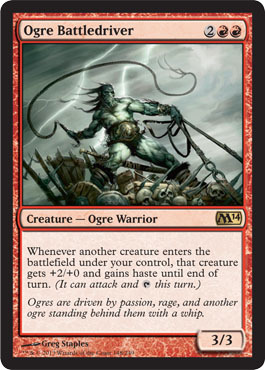 That 5 mana creates an increase of 33 power on board through buffs and token creation over 6 bodies.

This deck certainly doesn’t win every game. It folds hard to Elesh Norn, Grand Cenobite and things like Ghostly Prison and Propaganda – but that’s not really the point.

The point is that I took a look at why the dominant strategies in my local meta were dominant, set some goals for solving the problem through deck construction, and accomplished the following:

1) Stuck to a Boros aggro theme;

2) Reduced the effectiveness of a dominant strategy in the meta by keying in on weaknesses;

3) Patched a few of my deck’s own weaknesses by creating an increased focus on handling early game threats;

And perhaps most importantly

4) Forced the dominant threat in my meta to adapt to the new environment.

I can’t stress that last point enough, and that’s going to be a common theme through all of my upcoming articles. Through deck construction choices, we can all effect change in our local metas.