Recently I’ve made some new Magic-playing friends, and I have started using Spelltable to be able to play from a convenient and safe distance. This means that for the first time in years I have been playing Magic against actual people I know instead of strangers on Arena and Magic Online. Naturally, the format of choice has been Commander. Widely regarded as the best format for fun non-competitive play, EDH is also a great format for building decks that really suit your personality and interests. For me, that means that I have an intense Mono-Green Elf deck that features all of my favourite Elves printed since the dawn of Magic.

This deck began as a small low-budget elf deck, that was really just an excuse for me to play a bunch of cards I liked. But when I started playing with friends I immediately wanted to make it more competitive. So, I did what any normal person would do and looked through a list of every single Elf card ever printed and compiled my own list of every one that looked playable. It only took a few days! I then also looked through tons of Elf Commander decks that players had posted online to try to find non-elves that worked well in these decks. After a long process of whittling down the options I arrived at a working deck list. 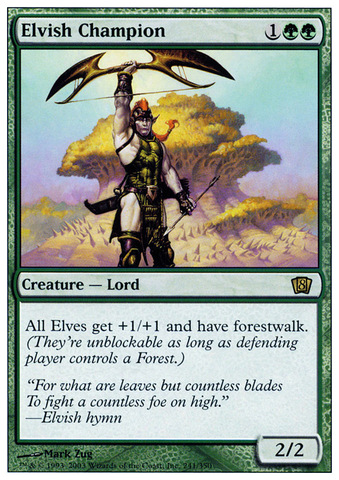 I slowly built this list over the course of a few years, always acquiring new cards and making changes as I found out how the deck played. I didn’t go out and buy cards like Mana Crypt and Craterhoof Behemoth right away, but when they were added I could always feel the difference they made. Many new cards have come out since I started building this deck that are amazing for it. Elvish Warmaster from Kaldheim has added a new dimension, Circle of Dreams Druid from AFR is like a second copy of Elvish Archdruid, and the recent Boseiju, Who Endures is an awesomely-versatile addition I’ve just made.

When I first played with this deck I used Nissa, Vastwood Seer as my commander. I liked that she provided value in longer games and was always reliable, but really I chose her for a commander because Nissa is my favourite elf, and I just liked the card. When I recently decided to really amp up this deck’s power level I finally made the decision to swap out Nissa for Ezuri, Renegade Leader. Ezuri is an incredible commander that can protect your board and act as your main win condition. Swinging with a handful of elves and activating Ezuri’s Overrun ability a few times is almost always enough to take down an opponent or two (or three).

Even though I’ve started focusing on the power level of this deck more than I used to, it’s still a home for most of my favourite cards. That’s what I love about elf decks! Marwyn, the Nurturer is one of my favourite creatures of all time, and she is great in this deck. I even get to play my special pre-release version of her I got back in the time of Dominaria. Collected Company is another favourite card of mine that is also super-competitive in this deck. Priest of Titania, Llanowar Elves, Heritage Druid, they are all cards I absolutely adore and love playing with. This deck is my opus, and it will likely be my favourite deck until the day I die. That isn’t to say that it is complete, however. After all, it is still missing its crown jewel: 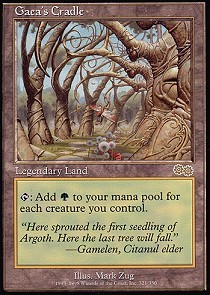 There are a number of different ways to build elf decks in Commander. Many people make Golgari Elf decks that center around commanders like Abomination of Llanowar or Lathril, Blade of the Elves. Others make combo-focused decks that aim to make infinite mana by tapping and untapping cards like Elvish Archdruid with artifacts. My deck is simply trying to do what elves do best, play a lot of creatures, make a lot of mana, and overwhelm opponents. 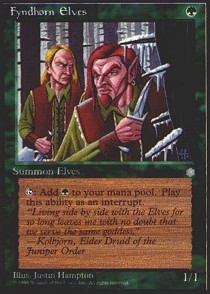 Step one for this deck is to play mana dorks. Llanowar Elves and its many redundant brothers make ramping easy. Mana Crypt and Sol Ring also help make it possible to play cards like Devoted Druid and Marwyn, the Nurturer early to start making even more mana. Heritage Druid is the best of all the mana dorks, and can create some truly busted starts.

In an ideal game, this is followed up by playing Elvish Archdruid or a similar mana-producing elf and playing Ezuri. The next turn I start attacking, aiming Ezuri and swarms of elves at whoever I am holding a grudge on at the moment. If I have seven or so elves, then I can typically activate Ezuri’s ability twice, giving all those elves +6/+6. Seven elves multiplied by 7 or more power equals 42 damage or more, and combined with trample this will often be enough to take a player down. Two or three combat steps, and this deck has won yet another game! Other times, I will go even bigger and tutor for Craterhoof Behemoth with a card like Fierce Empath or Natural Order. As many of you reading this probably know, the Behemoth will end games if it enters the battlefield.

Of course, things aren’t always so easy, and that is where many of the other cards come in.  Sometimes I run out of elves thanks to opponents’ removal or a well-timed sweeper. Moments like these are where Collected Company and Lead the Stampede are great. I might just be lucky, but Lead the Stampede will usually fill my hand back up with five or six creatures.

In some games, my opponents’ decks will manage to be even faster than my own. For example, a friend of mine plays a Krenko, Mob Boss deck that uses artifacts to repeatedly untap Krenko and make huge amounts of goblins as early as turn three (with the help of mana rocks). This is where interaction like Reclamation Sage, Boseiju, Who Endures, and Beast Within come in handy. Destroying a mana rock at the right moment or blowing up a combo piece can often buy just enough time to win the game before it’s too late. This deck’s main weakness is its limited interaction, so I find it is vital to use what I do have at the right moment and on the right target. 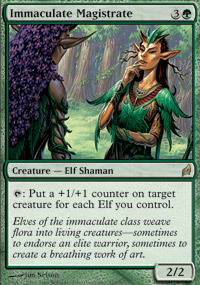 There are a couple of fun combos in this deck that come up occasionally and can help win close games. Joraga Warcaller is a good way to pump up a board full of elves, but when combined with Immaculate Magistrate it can quickly make all of your elves big enough to overwhelm opponent’s boards on their own. Another good combo for long games is Wirewood Symbiote and Beast Whisperer. Because the Symbiote can continually return elves to your hand you can continue to draw cards with Beast Whisperer. Ambush Commander and Regal Force is another good synergy for late in games. Regal Force drawing a card for every creature I control has been very overpowered when all of my lands are also creatures. Meanwhile the token generators in this deck like Elvish Warmaster and Lys Alana Huntmaster form a nice combo with Westvale Abbey, which needs lots of creatures to be activated. Westvale Abbey can be a good threat to have in games where I am struggling to pump up my elves; or when attacking on the ground isn’t an option. 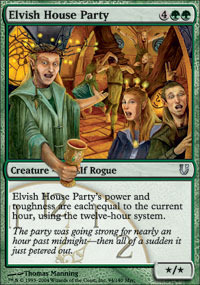 Overall, this deck plays fast and has a clear gameplan thanks to the years I have spent tuning it. While I am sure that there are still some upgrades that can be made, I am also starting to feel like the deck is nearing perfection. Of course, every new set brings the possibility of an upgrade or two, and there have been no shortage of great elves in recent years. This deck is my pride and joy, and it has been great to play with it more and more these days as I begin to enjoy Magic outside of Arena for the first time in years.