Editor’s note: This was recovered from the depths of our database. It’s a bit less timely, but I hope you’ll agree: still worth bitching about. Thank you for your patience.

Welcome back to Jester’s ReCap, an ever-flowing font of mean-spirited merriment and malicious mirth. For those of you just joining us, Magic News can sometimes be difficult to stay on top of and I’m here to help. Using absolutely no research, no insider knowledge and a shockingly small amount of decorum, I put together semi-monthly reports so that even the most disinterested among you can stay up to date. This past week there were only a few real “news” stories because Masters 25 is upon us. The culmination of a quarter century of Magic: The Gathering has arrived. More than just another master’s set, A25 is intended to be a love letter to the game itself not seen since Time Spiral block. This was intended to a monument. A milestone. A real achievement. A declaration of victory from not just WOTC but all of us who have built this game into an institution!

It seems..uh…fine. I guess. Assuming you aren’t in it for the EV. But we’ll get to that. First, I would be remiss to not check in on an old friend.

So, usually I like to go sort of big picture with the Magic Online sucking. It sucks in all sorts of grandiose, program-wide ways. It’s slow and ugly, and costly yadda, yadda. I like framing it like that, because I feel it is something any one who has experience with the program can relate to. MTGO Fails are a part of using the system. Filing for compensation after a crashed event? That’s a Tuesday. Losing on clock because of lag? Rarer, but it happens. Certain cards which just don’t work at all? They keep a list. It might seem repetitive, but it’s the little hindrances and irritants that I know everyone suffers that I like to come back to.

Today though, just for a change, I’d like to get personal. I don’t think most players have experienced this, because I’m pretty sure that somewhere along the line I buggered my MTGO collection all by myself. No crappy software bugs or disgusting program design required. See, I like to ship my chase rares back to bots and to do that, I need to put them in a trade binder. But somewhere along the line I screwed something up because every single time I drag a card into my trade binder? MTGO crashes outright and I have to log back in.  I have no idea what I broke, but it can’t be like that for every user or the secondary market would fail. It’s a good thing most Magic players aren’t as dumb as me, I guess is the moral of the story. Also, additional moral, I should never run a hedge fund or I might tank the NASDAQ, or like..I dunno, make one dollar worth zero dollars like that scene in Rick and Morty. I’m giving MTGO a pass on this one, because I’m pretty sure it’s my fault this time, but it still makes me want to pack my laptop full of gunpowder and hurl it into an active volcano. Just as catharsis you understand. There’s no way my laptop could be considered a virgin sacrifice. My laptop has seen some shit.

A25 Spoiler Round Up

Honestly, some news stories absolutely happened over the last few weeks, but none of it was particularly interesting or impacting to the game or the community. The only thing people are talking about is that the rare and mythic situation in Masters 25 is looking pretty dire. People are worried that for a set that costs $10/pack (or more here in the Great White North) there sure do seem to be an awful lot of uninspiring cards in this set. Honestly, I’ve never worried too much about getting my money’s worth out of packs of any set and I was prepared to simply draft this set once or twice and forget it existed.  Sure, a few folks seemed upset. There were a few jokes about “Comet Storm Masters” and the like. Then more rares and mythics were released. The number crunchers started to put the set into focus. Suddenly, it wasn’t a few folks, those vindictive pricks that are never happy with anything. The vocal minority of caterwauling pissy bitches that complain about every little thing. Nope, the community writ large was onboard for this bitchfest. Not because everybody was necessarily trying to treat Magic packs and boxes like an investment portfolio (even I know that’s stupid and I can’t work a trade binder) but because it became apparent that by tanking the EV, what WOTC was effectively doing was raising the price of every pack.  So alright, we’re pissed off. Doesn’t mean we have to be unhappy. Let’s have some fun taking extremely unfair pot shots at some of the cards in this set. 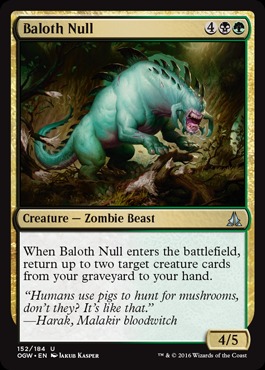 Baloth Null is what might charitably be called a “Limited All-Star”. It’s a ton of card advantage, a decent-sized body and can help grinder decks get some attrition victories. It’s also not a reprint anyone wanted, and I’m sorry, but it looks stupid. It has no eyes, its’ front legs are too short so it’s using a stump as a little step and it has these pincer things on its face that makes it looks like it’s choking on a boomerang.

This card ended up being a pretty great pick in Shadows Over Innistrad because it was fantastic at setting up delirium. The eagle-eyed among you might notice this set doesn’t have delirium.  I realize that having to pull from every set in Magic’s history means that role player cards like this one will be less effective and less interesting. That begs the obvious question why reprint those?

Even at mythic, Armageddon seems like a risky play for any Limited format. I don’t think there’s a less fun card to lose to, although admittedly setting up to win with it in draft or sealed is no easy feat. What’s killing me is that the card’s been printed a bunch. No one was crying out for it. The set clearly doesn’t need it. You aren’t answering Haunted Fengraf with this. What was the reasoning here? Are there so few spells from ABUR you could reprint? Honestly, at least printing Healing Salve at mythic would have let us all in on the joke. 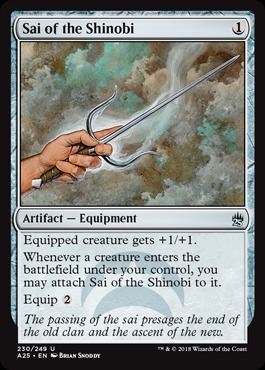 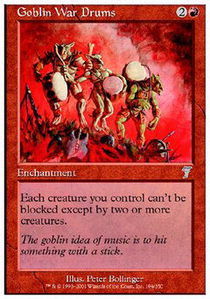 Yes, Wizards, it is very nice that after a couple of decades you got all that text reduced to one keyword. We’re all very proud.  On a board stall this seems like it could be pretty backbreaking, but it’s probably going to spend more time acting as Peter Criss than as Keith Moon. 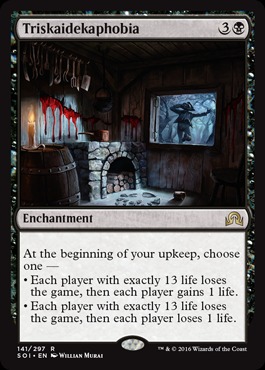 Ok, so it’s a bulk rare that no one was asking for a reprint for. And yes, life gain seems like a pretty small subtheme with the best payoff definitely being Kavu Predator. However, for those who say this card doesn’t do anything in A25, let me remind you that Wizards reprinted Cinder Storm. Suck it haters, that’s a two card combo for the…oh, it doesn’t work. Goddamnit.

Hey listen, I get that Griselbrand isn’t in this set, but isn’t printing dark ritual at common a little dicey? How many of these do you have to get passed before they start declining in value? I guess when the pay off is Ihsan’s Shade it’s less impressive, but I’m really not looking forward to watching my opponents cast two of these and powering out a 6-drop on turn 2. Although, I suppose this does present an option in the future for restraining how broken fast mana is. Just don’t print any cards worth accelerating into. 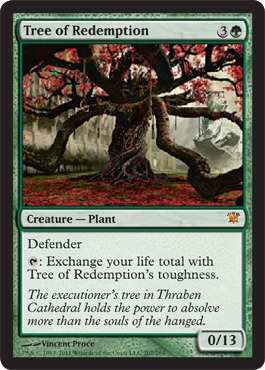 I actually really like this card, because it’s funny. There are no circumstances in which this card is correct to play, but there’s something about the idea of a mighty godlike Planeswalker hiding behind a tree that’s just so damn funny to me. Unfortunately this was the straw that broke the Wretched Camel’s back for a lot of the community. Maro ceded the point on his blog, claiming it was a last minute replacement made under heavy restraints. Which was an impossibly stupid thing to do, because it projected weakness. Angry Magic fans have less in common with human beings than they do Great White Sharks. They’re not just predators, they’re biological machines designed for a singular purpose. Sharks are for killing aquatic lifeforms. Pissed off Magic players are for howling obscenity into the void of the web. It’s a double-edged sword, having a great product, because no one hates you like the fans that love you. And with the sharks circling, our boy Maro thought it would be a great time to start showing blood. Never let us see you bleed, Mark.

It was exceptionally difficult for me to write, because this set is what everyone’s talking (See: furiously screaming) about and it’s not altogether terrible. This isn’t a trainwreck. It isn’t Dragon Bell Monk, or MTGO. I can make a trainwreck funny. This isn’t a bunch of Magic players overreacting either, which is also low hanging fruit, because we’re ridiculous a lot of the time. This is a mediocre set that failed to meet the expectations of the player base and that’s just disappointing. Generic, ho hum, “Mom made that chicken thing I don’t like for dinner” kind of disappointing. I’ll be back soon, and hopefully something exciting happens in the wake of all this downer spoiler season. I hope you enjoyed this article, please let me know if you did. If you didn’t, please do something incredibly stupid and Magic-related so I can use you as fodder in the next article.