Welcome back to Jester’s ReCap, a semi-monthly article series where I am supposed to ReCap all the goings on in Magic you have too much social life or pride to immerse yourself in. Just before my last article went up, someone at Wizard’s finally stopped paying attention and through what I am assuming is some sort of clerical error I finally got a beta key for Arena. So I’ve been playing more Magic than ever, but I have less rage in the tank than usual.  Which leads us quickly to our once perennial, now seriously endangered segment:

This is the number one reason why this article almost didn’t happen. I haven’t played MTGO since I got my Arena key. I haven’t felt compelled to even boot it up and update it. Maybe it’s great now? Maybe it is pretty and sounds good? Maybe it’s free to play? Maybe it runs well now? Maybe it bakes cookies, gives great handjobs and volunteers 10 hours a week a local soup kitchen. I don’t know and I don’t have to know. Because Arena exists and is pretty. And is free to play, and even during a recent stress test ran beautifully. No cookies yet, but it is still in Beta. Why would I ever go back?

Being angry at MTGO for so long feels so ridiculous now that there’s a modern, and excellent, alternative. I was only bitching and moaning because I felt compelled to use the damn thing in order to play convenient Magic from the comfort of my home. Now that I am not forced into using it, bitching about a 15 year old computer program seems incredibly petty. I mean, I already knew it was petty, but imagine the far-flung future of 2030.  There’s me (assuming I somehow outlive my horrible lifestyle choices) complaining that Arena won’t psychically link with my neuro-stim holo-emitter? It’s nonsense and I feel stupid. Yet, I’ve basically promised to open every article for all time with MTGO hate. What do I do when I run out of scorn? What does this series even look like when I know joy? It’s time for soul searching. I’ll get back to you.

You Can Drink at Your LGS, but… Maybe Don’t?

Look, I’ve mentioned before I’m a teetotaler, so sometimes the deleterious effects of alcohol are exaggerated in my mind. I see cartoonish buffoons pissing on cop cars and falling down stairs.  I see slovenly jackasses harassing pretty waitresses and garish women slurring and “wooo”ing with only limited awareness of their surroundings. But that’s probably not realistic. Every single day many admirable adults enjoy their leisure activities of choice with maturity, responsibility and a nice glass of wine, beer or other spirits.

Magic players however, you’ll recall had a contingent of asshole players who didn’t need booze to help them harass a young cosplayer on twitter, or try to organize a boycott against Wizards for encouraging diversity, and whose salty tears have fuelled a thousand shitposts. These guys don’t need any inhibitions suppressed. If anything a nice dose of shame is probably in order. I don’t wanna see these guys 3 drinks in when I fumigate their board and turn the corner. I don’t want to see them celebrate a victory by vomiting into a gutter. I don’t want to see them get mana screwed and start weeping into a scotch. I mean, I kind of want to see that last part but I’m an asshole.

I would say, “if you think you’re a responsible adult, feel free to drink” but you know these assholes are super certain that they are, in fact, the best people in any given room. Everyone is “too sensitive” and “not on their level”. So basically… maybe just ease up on the booze at FNM? Not because you’re an asshole, but because a few assholes can indeed ruin it for everyone. Kamigawa had great art, interesting flavour, and a number of actually terrible mechanics. Sweep had it’s moments but mostly sucked. Epic is a punchline. Bushido is boring and was named incorrectly. Soulshift and Splice were the textbook example of parasitic.  Others were not impressive at the time, but did have enough juice to be “fixed” later. The original flip cards have been improved immensely through double-faced cards.  Tons of Legendaries? Dominaria did it better. “Offering” which is a mechanic you forgot existed until right this second, was improved by Emerge. So, what a does a return to Kamigawa look like? Well, hopefully a bit like Dominaria by way of Japan? Plus the return of Ninjutsu which is about the only good mechanic the set produced. But in my worst nightmares it’s just a bunch of 4-mana 2/2s, parasitic mechanics and the worst elements of Japanese stereotypes. It would look like this:

When Robot Nurse Angel enters the battlefield, sacrifice any number of Cherry Blossom tokens. For each token sacrificed this way gain 2 life.

So you know, even money I guess? Either it’s a ton of fun with cool Legendary uncommons, tons of Ninjas, and some new double-faced cards. Or it’s bad. I suppose I’m cautiously optimistic? I don’t know, maybe I’m just feeling much more positive since Arena came out.  Nothing really gets my blood up. 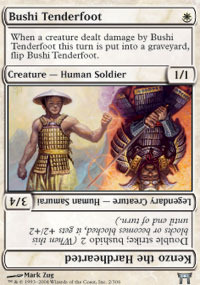 I was wrong. He’s a cheater! He’s all but admitted it on multiple occasions. Tons of players with no idea of his reputation continually report him and in a sea of thousands and thousands of players he managed to gain a reputation for cheating! That’s actually hard to do! I understand nothing is set in stone. I understand that there’s due process or whatever, innocent until yadda, yadda, yadda. Don’t let cheaters play at the highest level of your game! You’re trying to be a competitive sport! People need to know that if they put in the considerable amount of work, money and effort it takes to be a Pro player, they aren’t going to get matched up to some asshole who stacks his deck! GODDAMNIT WIZARDS. This is the easy stuff! Stop screwing up.

You know what? To hell with positivism. I like Arena a lot, but it’s hardly perfect. Let’s break it down:

Arena is pretty- but it’s busy. For anything other than Standard matches it’s probably too much. Complicated board states are going to lose a lot of coherence behind all the animations and goofy “I’m blocking this” lines and arrows.

Arena is free — but of course it has “Freemium” transactions where you buy a bunch of made up bullshit currency. It’s better than MTGO, because I find myself playing more Magic for way less money. But I’m a Limited player. I imagine constructed players have to either accept that their decks will be imperfect — or will take a thousand hours — or will spend a thousand dollars. I personally have no problem playing “imperfect” non-optimized decks, and would love a meta full of them, but again, I’m a Limited grinder.

All in all, I like Arena fine and I’m not going to be opening articles with “Arena Sucks”, but let’s not all hold hands and sing Kumbaya just yet. WOTC has work to do.

And that’s it for me. Maybe I’ll torture myself with MTGO between next article and this one just to keep the hate running? Or maybe I’ll just find a new way to open the articles. Let me know what you think and leave a comment. Mean is good, happy is better, irreverent is best.