I’m back again with my increasingly common, off-the-cuff, no-research-done, recapping of the latest news over the last two weeks of Magic: The Gathering. Now granted a thin veneer of professionalism by new friends here at the Mana Base, at least until they come to their senses. Unfortunately, the news cycle has been completely buried by the current spoiler season for Commander 17: Time-Traveling Vampire Dragon Cat Wizards from Another Dimension. I’m standing by my hard and fast “no research” rule, so a lot of this article is just my comments on some random cards that were spoiled. It should be noted that none of my opinions have strategic or artistic merit of any kind, and will be absolutely no use to anyone. Which only makes me a little bit worse than every other spoiler article that’s been posted over the last couple weeks.

1) First though, let’s check in on our friends over at MTGO. I’m feeling more charitable this week, because at this point its ability to suck so completely is bordering on a superpower. MTGO has an entire Avenger’s team worth of sucking squeezed into a .NET Framework. It spends more time frozen than Captain America. It is uglier than the Hulk. It crashes more than Thor. It uses technology on par with Hawkeye*. It’s been in development hell longer than Black Widow’s solo movie. And none of it matters even a little, because it still makes money like Iron Man. And like all the best Superheroes, it ended up creating it’s own arch-nemesis. In this case by forcing me to watch my clock slowly dwindle and time out while I desperately tried to hammer the grayed-out “Ok” button, helplessly trying to pass priority to “SkullzPower17”.  (*And yeah, I know, Hawkeye has a bunch of cool arrows and a neat rotating quiver. I will grant you he’s using cutting-edge Quiver Technology. The ammunition magazine was invented in the 19th century, ok? If I strap a rocket to a horse it doesn’t suddenly make the Pony Express relevant.) Nigh-undetectable to the naked eye, the amount of data conferred to us by WOTC is so minute as to be almost nonexistent. I actually would have preferred they told us nothing, because then at least I wouldn’t have to try and write about it. It’s like I asked how far it was to their summer cottage and they told me in centimeters. True, technically they conveyed information, but somehow I feel like their goal was actually to keep me from knowing anything. The two take away points are: i) The product will be called Magic: Arena and ii) We might tell you more later, if you’re good.

Arena is a terrible name,  I think we can all agree. It’s generic and boring. It draws direct comparison to Hearthstone’s attempt at Limited play.  Also, they already called their boardgame “Arena of the Planewalkers” two years ago. But what really bothers me is they announced it like it matters. Like there’s some excitement we’re supposed to generate or some subtle clue we’re supposed to latch on to and speculate about. You know WOTC if you were only going to spend 12 seconds on this anyway, you could have asked me. Check this out:

Magic: The Next Thing

Magic: The Quest for More Money

See? Nothing to it.

Despite all that, and despite our reputation for being jaded, hateful Shoggoths incapable of joy, a lot of Magic players allowed themselves to dream. To hope. To believe that maybe this product would be the successor to MTGO we’ve been waiting for. Or that it would be free-to-play and actually have the full magic rule-set. “Just standard,”, they cried out, tears of self-delusion running down their beautiful, pure faces, “They could do it if they only had to deal with standard-legal cards!”. Maybe this would be great. Maybe fun would be had by all. Maybe there would be pie. Maybe it was time to love again.

Apropos nothing, let me remind you that there was once a similar product to that, called Duels. You might not remember it. That’s not because it happened a really long time ago, or because it was so obscure nobody played it. It’s because WOTC killed it. They tore its jugular out with their teeth. It wasn’t hurting anyone! It was just there, dutifully making money the way only a free game can. WOTC didn’t care. Their faces were expressionless as they started to beat Duels with a tire iron. To kick at its ribs. To slice at its flesh. They didn’t smile. They didn’t flinch. They didn’t stop. Children cried. Women screamed. They just kept hitting it, long after it stopped twitching. “No new sets after Hour of Devastation” they said, with the first hint of a blood-soaked smile. Then they buried it in the earth and then burned all photographic evidence of it ever existing. Joseph Stalin looked at the job WOTC pulled on Duels and was genuinely impressed.  The Emperor needed 20 years to purge the Jedi from public consciousness, WOTC erased Duels from relevance in one announcement.

3) And that’s it for what I can remember of the news. So now, let’s get to some of the spoiled C17 cards, and what they mean to me: 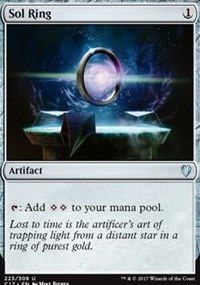 Endless discussion, constant controversy and even some bannings on MTGO isn’t enough to get WOTC to change its mind. The design team for Commander 17 has spoken, and their decision is that some small percentage of Commander games should end on turn 1, but then take 17 more turns to play out. 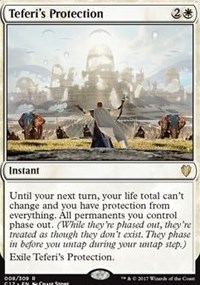 This card basically lets you call “Time Out” in a Commander game. Which I find really cool and just, tragically sad. There’s probably a more efficient way to tell all your friends you’re a massive wimp, but they won’t have as much style. 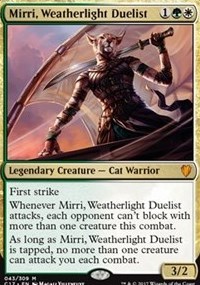 Sorry Brimaz, but this kitty is retaining her role as the most famous cat in the multiverse. Almost worth the excruciating pain of old school players reminiscing about when Magic’s story was “good”. Sort of like how they stopped writing good love songs once you weren’t a teenager anymore.

You know that one guy who shows up to casual Commander night with a deck full of fetchlands, even though most of his friends can’t afford that? Screw that guy. 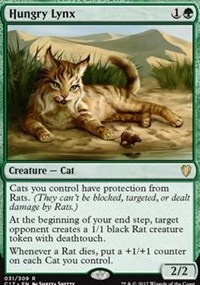 What the heck is this? Sure, there’s a flavor win in giving cats “protection from rats” but this supposed mouser makes Typhoid Rats for my opponent every turn? That’s not a drawback ability, that’s a goddamn extortion racket!

Hungry Lynx: “You sure I can’t hit you up for some tuna, man? I’ll make it worth your while. I’ll keep your battlefield totally rat-free”
Me: “ Oh, uh, well, I’m already pretty rat-free so…”
Hungry Lynx “Check again, asshole. And the price just went up. Now it’s fresh salmon fillet AND you have to stop me from getting doom-bladed.” 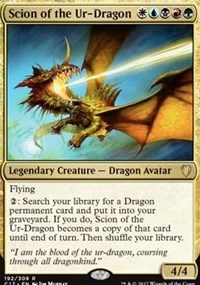 The common advice for making Scion your commander is that you can keep it fresh by rotating out a bunch of different dragons, that way you don’t win with the same infinite combos over and over and over again. Everyone knows that to truly end up friendless and alone you have to win with a different combo every damn week, so as to maximize the demoralization of your playgroup until they can’t stand to look at you anymore. Look, there was never a chance Scion didn’t get printed in this deck, and if they hadn’t bothered he’d have been the very first addition any Dragon player made. Scion already existed, the genie was out of the bottle. Now, at least WOTC looks like they did this to us on purpose. 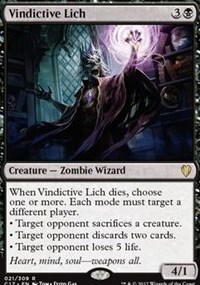 I now write a comedy column on a semi-professional, marginally-respected basis WOTC, so let me be clear: Noticing that “Lich” rhymes with “Bitch” does not constitute humour. It barely constitutes an actual rhyme. Also, you printed this thing in a bunch of languages? Is there an Italian card somewhere with a name I can run through Google Translate and get back “Mean Dead Guy”? 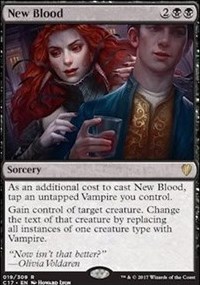 4 Mana to permanently steal a creature is good, but the real value of this card is reading the flavor text as sensually as possible when you take their best dude. Make sure you run your fingers delicately across the sleeve. Lick your lips. Maybe make little shushing noises. Basically, if you play this card right, your opponent will feel the need to cry in the shower later. 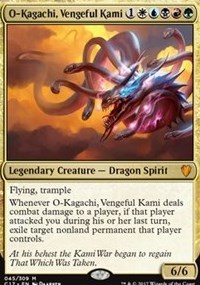 5-colour “Leave Me the Hell Alone” seems to be a deck here, which is fantastic for coming in second in a Commander game. I’ll never play this card though, because I have a friend or two that speaks Japanese and I’m afraid if they hear me try to pronounce this they’ll stab me, or scald me, or leave me to die on the side of some highway somewhere. I prize adaptation, creativity and cruelty in my friends, basically. I also prize awesome Kamigawa art, but not enough to play this. 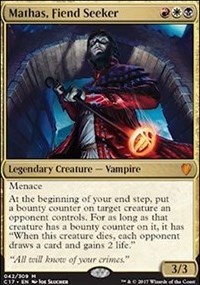 As in favour as I am for both Vampiric Bounty Hunters AND flagrantly lifting a whole mechanic from Star Wars: The Gathering, this card irks me. First Sorin, then Edgar, now this guy, it looks like WOTC has decided that bloodsucking monsters should sometimes be painted as misunderstood anti-heroes. Screw that and the derivative YA fiction it rode in on. You eat people, you’re not a good guy. That’s not my “hot take” on the issue, ok? That’s the deal. You can eat people and still be cool. You can eat people and still be sexy. But you cannot eat people and then turn around and claim the moral High Ground.

And that’s basically it. Hopefully spoilers let up between now and my next attempt at this. And hopefully TheManaBase.com continues to show poor decision making skills and I get to write some more of these.