Despite the better judgement of all involved parties, I continue to produce this article on a biweekly basis. Jester’s ReCap is a short, off-the-cuff article which can keep you up to to date on the latest Magic: The Gathering happenings. In theory, it will also make you laugh in the way only the impotent rage of a tiny little man with a sizable vocabulary can. I don’t research stuff that happened, I just go from memory so you’ll forgive me if this fortnight’s article is a little one-dimensional, but there was one thing that stood out significantly for me over these past two weeks: the first reveal of Magic Digital’s newest little bundle of joy, Magic Arena. The short version is, I’m a fan. But then, I’m also a negative, cynical, whiny sonovabitch who should really get medicated, laid or both. So naturally, I can’t just be happy. We’ll get into the details in a moment, but first: MTGO is an unrelenting suck machine. I’ve been thinking about how many Magic Digital products have come into existence, made some amount of money, then died unceremonious deaths at the hands of a their cruel WOTC taskmasters. The answer is, a whole fuzzy bunch. WOTC digital products have the lifespan of a piece of pre-chewed gum. And the only one anyone seems to remember liking is the Microprose one that was built for DOS. I guess Magic Puzzle Quest still exists? That hardly counts though, as Match-3 games are the Tardigrade of mobile gaming; Unkillable parasites that will outlive every meaningful human connection on earth. But through it all, MTGO’s been around. Still charging an unbelievable ten dollar account fee. Still charging real money for every card, every pack. Still working about half the goddamn time. Sucking but surviving, like some kind of money-consuming Remora fish. It. Just. Keeps. Sucking. It can’t be bargained with. It can’t be reasoned with. It doesn’t feel pity, or remorse or fear. And it absolutely will not stop until you are so salty Romans use you to end wars.

WOTC, buddy. Pal. Let’s rap, m’kay homeboy?  Is it ok if I sit on this chair backwards in a move that shows I’m both approachable and “hip to your style”? Coolio, brah. Listen, I get it. You see a lot of the people who used to be paying all their attention to you, lured away by the slick interface and you know…Free-ness, of the competition. Suddenly this billion dollar mega-behemoth called Blizzard is making a game on your turf. And they’re sorta good at it! At least, they’re great at all the things you suck at. Their app is effortless to use. They give shit away like a drug-dealer in an after school special. They have visually interesting animations, and voice acting and an artistic style that isn’t just beautiful but also consistent and coherent. You got a little scared, and there’s no shame in that. Well…there’s a little shame in it, because how you handled yourself was so impossibly shameful. What with the flailing and screaming and wetting yourself. You can be a little ashamed of that part. But mostly, no company was going to handle their direct competition suddenly being  Blizzard”We have as much money and talent as God but a better design philosophy” Entertainment.  So you got nervous and you start tossing stuff at the wall, and seeing what sticks. And now, you’ve decided Arena is the silver bullet. All of Magic’s complexity and glorious interaction, but with lights, and sounds, and voice acting and animation. It’s pretty, which is a nice change. It’s not compromising Magic so that it can be a Bejeweled clone which is relieving. It’s free to play, which is fantastic! I honestly think Magic: Arena, outside its incredibly stupid name and apparently limited card pool, actually looks awesome. You’re going to have a closed beta where you take player feedback and put it somewhere other than the usual woodchipper, and you’re going to give priority to get into that Beta to Duels players, MTGO players and people who do the Ixalan prerelease at their local LGS. You are, in the face of all historical precedent, doing very well.

But WOTC, as excited as I am for you…for us, you are scaring the shit out of me. See, you’ve shown me something that looks pretty, and you’re promising it won’t compromise Magic’s biggest draw, it’s never-ending mind-bending depth. But you haven’t shown us a single deckbuilding interface. Or trading interface. Or discussed the in-game economy. Or talked about organized play. You keep saying it’s too early, and that’s totally true, but you haven’t sealed this deal. I don’t want you spiking the football just yet ok? You’ve shown a lot of promise. I’m cautiously optimistic. But don’t get cocky. This is the part where traditionally you trip on the two yard line, cartwheel into a pyramid of cheerleaders and end up choking to death on your own jockstrap. Stay the course guys. I want this for you.

3.  Iconic Masters, for a given value of “Iconic” 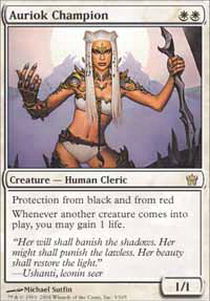 Just so this article isn’t completely positive and all about me actually being excited for Arena, let’s take a stroll through this particular clusterfudge, shall we? Iconic Masters shouldn’t exist. The Masters sets to this point have been exciting, fun draft environments and an excellent way to get a few reprints of some expensive cards out there. How effective they’ve been at anything other than selling more Magic cards is debatable, but the theory was sound. The problem is, you can’t make a set with all Iconic cards. That’s not what the word Iconic means. An Icon is the Ur example of a thing. The natural, platonic ideal which all other similar things are necessarily seen as a derivative of.  Serra Angel? Sure, that’s most people’s default Angel.  Bloodghast? Yeah, that’s guy is probably an Iconic aggro-vampire.

But your set also contains Dragon Bell Monk. I was going to list a bunch of other cards in the set that I think fall short of the “Iconic” moniker, but screw it, let’s spend a few hundred words talking about how awful Dragon Bell Monk is.

Dragon Bell Monk is a 3-mana 2/2 Human Monk. That’s not just boring, it’s tragic. It’s the kind of card that proves you can print disappointment onto cardboard. That’s what sad clowns think about while they masturbate. It has Vigilance, which is fantastic on large things. It has Prowess, which is great on cheap things. You will note that Dragon Bell Monk is both expensive and tiny; It’s like the world’s worst male prostitute.  The flavour text on Dragon Bell Monk actually says “Steve, write something about Dragons and maybe a bell here – Adam”. You might claim I made that up, but no one has ever stayed interested long enough to finish reading Dragon Bell Monk so I guess we’ll never know.  If you’re drafting Khans block and Dragon Bell Monk doesn’t wheel, a level 2 judge will know to stop everything to make sure no one is having a stroke.  If you play a Defensive Stance on a Dragon Bell Monk you are actually considered legally barred from having fun, forever. It’s true. You have to get work as an insurance actuary or as one of the voices on a Big Bang Theory laughtrack. Dragon Bell Monk cries himself to sleep every night, remembering the time Monastary Swiftspear said “Hi” to a person standing behind him at school and he said hi back, and then she laughed at him and he got so embarrassed he shame-vomited on her. Dragon Bell Monk is worse than Scathe Zombies because at least the zombies aren’t trying so hard. Dragon Bell Monk wishes it had Bushido.

That’s it for me this week guys, I hope you enjoyed a slightly more positive outlook on things.