Hey Everyone! Welcome to another Modern Musings! This week we are going to look at all the cards in War of the Spark that could make an impact in Modern.

In case you haven’t been paying attention to the War of the Spark spoilers, this set is hot fire.  36 Planeswalkers, powerful spells, Drool-inducing legendary creatures, this set has it all.  There are so many cards I want to talk about that I’ve had to break up this article into two parts.  In short, there are a lot of interesting cards for Modern in this set.  I don’t necessarily think that all these cards will see play, but they are all worth taking note of.

I’ll also be grading these cards on the likelihood they will see play in Modern.  This is the scale I’ll be using: While all the gods are powerful, I think that Illharg has the most potential to see play in Modern.  His on attack effect is a bit like Through the Breach, but instead of sacrificing, it returns to your hand.  If you’ve ever been on the receiving end of Through the Breach, then you know how devastating it can be.  Unfortunately, Illharg doesn’t have haste, but that’s okay because conveniently he/she (it?) is legendary for Goryo’s Vengeance.  This means that you can cast Faithless Looting on turn 1 discarding Illharg, the cast Goryo’s on turn 2, attack with Illharg putting Emrakul, the Aeons Torn into play hitting for a whopping 21 damage and most likely killing your opponent.  You don’t get the annihilator trigger from Emrakul but when you’re swinging for 21, who cares? 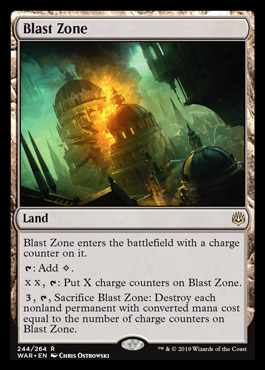 Blast Zone is kind of like a Ratchet Bomb or Engineered Explosives, it allows decks to take care of threats with a specific converted mana costs.  The upsides of this card are twofold; it’s a land, and therefore more impervious to hate like Stony Silence, and it comes into play with a counter already on it, allowing you to destroy one-drops immediately.  That being said, I feel as though the disadvantages might outweigh the advantages here as you need three mana in addition to itself to activate it making it very slow in Modern.  Waiting until turn four to blow up 1 drops is a bit too slow for my tastes even if it is on a land.  It is possible proliferate or some other charge counter manipulation makes this better, but for now that’s too much work for this card to be viable. I’m probably more hyped about Karn than I should be, but I love everything that this card does.  His static ability is super nice as a once-sided Null Rod, giving some decks mainboard access to extreme artifact hate, albeit expensive artifact hate.  His +1 loyalty ability allows him to animate an artifact and beat face with it.  This is a nod to Karn, Silver Golem‘s effect and can be a pretty useful one as it lasts until your next turn you can use an artifact like Chromatic Star to chump block and protect Karn.

His final ability allows you to get an artifact from exile or sideboard which is a super useful ability as there are a number of silver bullets to fetch like Grafdigger’s Cage or Damping Sphere.  Not to mention you can go get a Mycosynth Lattice and hard lock your opponent out of the game.  I think that Karn would probably best go in Tron because of this.  Especially if the new mulligan rule pans out, I think that Mono Blue Tron might make a resurgence.  Mono blue is probably a bit better equipped to protect this than many other incarnations of Tron. Ashiok is back and badder than ever as she now exiles graveyards and stops opponents from searching their libraries.  The static ability here is great as it stops fetchlands, Primeval Titan, Scapeshift, Whir of Invention, etc.  The minus ability is pretty sweet as it allows you to either mill your opponent in addition to exiling their graveyard, or mill yourself to fuel delve and then exile your opponent’s graveyard.  All in all, Ashiok is simple but pretty sweet.  I look forward to testing it in various shells.

Anyway that’s all for this spoiler review, Look for part 2 as it should be up shortly after this one.  What do you guys think of these spoilers? Do you think any of these are likely to see play in Modern?  Let me know what you think and I’ll see you next time!