Jump/Start is a fascinating product concept. It’s effectively the card game Smash Up combined with Magic decks, the idea of quickly shuffling together two half-decks to play a game is quite cool, and is somewhat reminiscent of the welcome decks you can sometimes find at your LGS. What intrigues me is how each booster is designed to work seamlessly with every other one despite their differing themes. This suggests that there’s an underlying structure that all of these packs follow to make sure that when you shuffle two of them together that the mana curve of the resulting deck will always work. 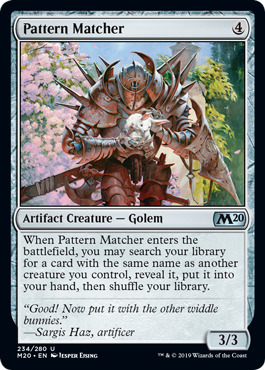 I started looking at the list of cards in each pack, and while there were certainly a lot of small variations, I noticed that the core structure was fairly consistent, just as I suspected. If I could narrow down these guidelines it might be possible to build my own Jump/Start compatible half-decks using cards in my collection. With something like Cardamajig’s resealable card packs, you could put together a small Jump/Start Cube out of official packs and custom ones for a lot of variety. This could make for a fun change of pace from a casual Commander game, and its quick setup time would make it easier than doing a regular Cube draft on nights when you might not have as much time.

I really like the idea of exploring some different themes using the Jump/Start template. Things like Homarids, Explosions or Ladies Looking Left could all be fun to build around, and because you don’t need very many cards per pack, finding enough to support a really weird or obscure theme would be easier than trying to build a full deck. The trick would be coming up with a theme that would fit well with the real Jump/Start packs. Ideally you’d want these half-decks to synergize with the real Jump/Start packs, while also being relatively well balanced against them. Too weak or too strong and they just won’t be any fun. 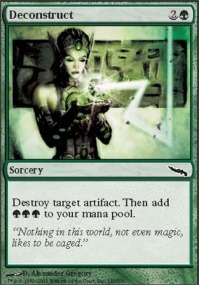 But I’m getting ahead of myself. How do you go about making a custom Jump/Start pack? It’s clearly more than just picking a theme and throwing a bunch of cards together. There’s a general pattern to these packs, and if we don’t at least try to follow it then these piles of cards won’t feel like they belong together.

Each Jump/Start pack comes with 8 lands, usually in the form of 7 basics and 1 nonbasic. Jump/Start introduced the Thriving land cycle that taps for one fixed colour and another of your choice, which is cool, but if we don’t have any copies of those cards we can probably make do with something like an Evolving Wilds instead. We could also consider Vivid lands, Rupture Spire, or any other five-colour land. If we’re feeling especially creative we could even find thematically appropriate colour-fixing lands.

The remaining 12 cards in a Jump/Start pack range from 1 mana to about 5, with a few exceptions here and there. Each pack follows a rough mana curve, with a couple of cards at each mana cost. Of the nonland cards, they’re usually two-thirds to three-quarters creatures, with only about 4 noncreature spells in total. Generally speaking, the mana costs are distributed like this:

This is a very rough estimate, but you can see that packs tend to favour two mana and three mana plays, much like a typical Draft deck. Packs can deviate from this formula, but it gives us a good starting point when designing a custom pack.

Colour-wise I’d try to stick to mono-coloured packs where possible, but that’s a personal preference. Some of the Jump/Start packs have two or more colours, and their mana bases reflect that by including more nonbasic lands. They also have some nonland cards that can help fix their mana, like mana rocks, so that’s something to consider if you’re building something using more than one colour.

With the general pack structure in mind, all that’s left to do is to decide on what themes to build around. I opted for a mix of mechanical and flavorful themes, but there’s really no limit on what you could do. The more open-ended a theme, the better it will mesh with other Jump/Start packs, while parasitic mechanics, like Food or Arcane, won’t work as well. You should also be mindful of relying too heavily on one or two specific cards or interactions, since each pack will only make up half the total cards of a deck. That’s not to say that you can’t include big combos if you want, but that these may result in less cohesive decks overall. It’s not the end of the world, but it’s important to consider how these half-decks might fit together.

With all of that out of the way, here are some of the themes I came up with, along with their pack compositions:

Jump/Start has two variations of the “Under the Sea” theme, but I wanted to make something more monster-y and less merfolk-ish. I resisted the urge to include Islandhome cards like Kukemssa Serpent and Manta Ray, but I did like the idea of your creatures getting better when your opponent controlled an Island. Hammerhead Shark was a good middle-ground: it’s a reasonable card as a two-mana 2/3 defender, but if you can cast Spreading Seas you can start swinging in with it, too. Sealock Monster is similar, though because it can turn a land into an Island on its own it’s thankfully less dependent on the Spreading Seas. I decided to add High Tide mostly for flavour reasons, but since this deck has some large mana costs in it, it could be instrumental in playing an early Frilled Sea Serpent or in activating a Monstrous ability.

I’ll admit, this demonic cult was really just an excuse to build something around Feaster of Fools. The flavour of that card reflected in its mechanics is fantastic, and while this pack might not have the mass of tokens that would be ideal for it, there are still plenty of Clerics to Devour. The toughest part to building this pack was finding a way to make Archfiend’s Vessel work in a way that felt both satisfying and on theme. Eventually I landed on splashing white mana for Unburial Rites, and I think that was the correct call, especially given the flavour win of including both Forsaken Sanctuary and Temple of Silence with these cultists. My only regret is that I couldn’t find room in this pack for Dark Ritual.

Where the cultist and sea monster themes were mostly chosen for flavour reasons, the idea for changelings was based purely on mechanics. Several Jump/Start boosters are based around a creature type, so I mused at the idea of a pack of Shapeshifter cards that could go well with any of them. After looking at my options I decided to stick with mono-white; there were plenty of solid options in that colour, like Avian Changeling, Irregular Cohort and Valiant Changeling, and I didn’t feel the need to add a second colour. The real breakthrough was when I thought to include Adaptive Automaton and Brass Herald (and later Shared Triumph); you could name a creature type from the other half of your deck and still give the buff to the changelings.

With a bit of work you could probably make a pack of changelings for each colour; there’s a lot of variety there, and it would be interesting to see what those half-decks might look like. If I design more custom Jump/Start packs, I might have to try building the other four.

I watched Redline recently, which is a fun, over-the-top anime film about extreme car racing in the far future. You can probably blame that movie for this pack theme. Don’t get me wrong, I could have just made a Jump/Start pack with a bunch of Vehicles and Pilots from Kaladesh, and that would have worked, but I wanted to focus less on the Vehicle mechanic and more on the idea of race cards driving at breakneck speeds. This would naturally overlap with some of the Kaladesh cards, but by shifting the theme a little, it gave me a new direction to look in. Cards like Oxidda Daredevil from Scars of Mirrodin, or Cheering Fanatic from Battlebond feel like a good fit for this pack, but I wouldn’t have even considered them if I was only looking at Vehicle cards. Admittedly, by focusing on theme more than mechanics this is probably a weaker pack than it ought to be, but I hope the overall flavour shines through and makes up for that. In particular, Ogre Leadfoot really amuses me here, despite the card’s low power level.

Have you ever noticed how many teeth feature prominently in Magic art? It turns out there are quite a lot, whether they’re biting, grinning or gnawing, and once you start looking for them you can’t not see them. I don’t think I can look at a Magic card quite the same way anymore, especially if a toothy maw is involved, but I think the end result here was worth it. This may not be the most mechanically cohesive Jump/Start pack in the world, but it should still have enough disruption to cause problems for an opponent. Plus, I get to include a play on words in the land slot, so I’m happy. 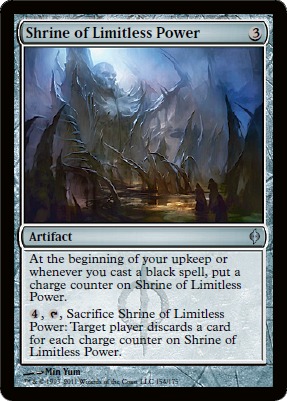 There’s really no limit to the themes you could build around for homemade Jump/Start packs. Eldrazi? Done. Squirrels? Too easy. Lumberjacks? No problem. Pizza? You’d better believe it. Whether you’re building a pack based on mechanics, story, artwork, or something else entirely, with thousands of cards to choose from, you’re bound to come up with at least a dozen cards that will go together for a half-deck. So pick a theme, dig through your collection and make some custom Jump/Start packs! It’s bound to make for an interesting game night.