I wrote the initial rules for Journey into the Ravaging Wilds about a year ago, but at the time I wasn’t satisfied with how it was shaping up. It fell onto the backburner as I moved on to other projects. I loved the concept behind the Horde deck; the theme felt solid, and the mechanics certainly had potential. Still, something just wasn’t gelling.

I was largely inspired by a couple of chapters in the Return to Dominaria storyline. Chandra meets Karn, who is searching for the infamous Sylix in the forest of Yavimaya. Upon her arrival, the excavation is attacked by wave after wave of animated trees. As I developed the Horde deck and rules, I started to pull on ideas from other stories, like the classic temple scene at the beginning of Raiders of the Lost Ark. 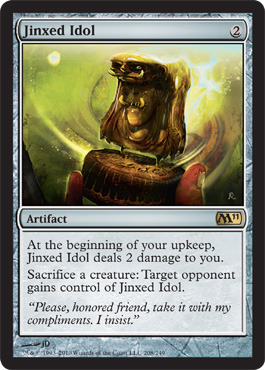 I wanted there to be a gradual buildup to the moment the party finds the Relic, then to suddenly and drastically increase the danger as the Party scrambles to the escape with their treasure. A slow, cautious approach can avoid a lot of pitfalls in the first half of the game, but if I’ve done it right, even a well-prepared group should have to scramble a bit to make it out of the forest alive.

From the get-go, I knew I wanted to incorporate Threat Level in the Ravaging Wilds. It worked so well in Attack of the Dreadhorde as a way for the danger to escalate, but moreover the Threat Level gives the Horde deck a quantifiable resource that can act as a stand-in for mana. 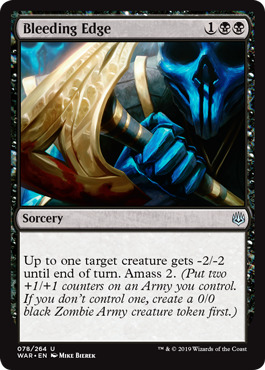 This resolves a lot of rules questions: Can the Horde deck pay for a player’s Mana Leak or Thalia tax? Will it activate any abilities on its turn? Threat Level resolves all of that in a pretty tidy way. The only trouble was that the Ravaging Wilds didn’t use any cards with Amass, which was the main tool I used to increase the Threat Level for the Dreadhorde. The Ravaging Wilds would need some other way to increase it. The earliest version I tried had the Threat Level increase in a whole bunch of different ways:

Damage dealt to the Horde Deck always increased the Threat Level. This tends to punish token decks more, but they make up for it by being a bit better at blocking the Horde’s attackers.

The Threat Level originally increased whenever the Party played a creature, but the amount of Threat gained was was different depending on the power of the creature; the bigger the creature, the more the Threat Level would increase, with small enough creatures being able to slip into the forest unnoticed. This plan ended up being overly complicated for little to no gain. I liked the basic idea, though, so I streamlined it. Now the Horde only cares about a creature coming into play if its power is 3 or greater, and it increases the Threat Level by the same amount each time.

The Threat Level was initially going to increase whenever a Wilderness creature died, too. This ended up being surprisingly punishing; alongside the other triggers, this basically meant that no matter what the Party did, the Threat Level would inevitably spiral out of control. After only a few turns, tracking the Threat Level at all became effectively moot; it would take a player discarding their whole hand just to lower the Threat to something manageable, and it wouldn’t stay that low for much more than a turn. It wasn’t worth the resources spent to try and keep it down.

What really made me realize that I should get rid of the death trigger was when, after a couple of really good test games, I realized that I’d forgotten about the rule entirely! I hadn’t been increasing the Threat Level when things died like I was supposed to, but despite that oversight the game still posed a decent challenge. Not only did this show me that the death trigger was an easily overlooked rule, but that the game was fun without it.

I knew I also wanted to use Kicker spells in conjunction with Threat Level. I wrote about this idea a long time ago in an article about designing scalable threats for Horde Magic. At the time, Dominaria was relatively new, and with it the return of Kicker. The mechanic was fresh on my mind, and I outlined something that would become the rough outline of what would become Journey into the Ravaging Wilds. I even brainstormed a prototypical version of the Threat Level mechanic, themed as “rage counters” placed on a basic Forest card. 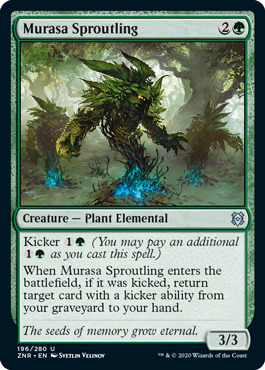 When kicker came back again in Zendikar Resurgent, it got me thinking about this idea again. I considered making the Horde deck in full Temur colours, with red and blue spells to compliment the green monsters. This could have worked, though I ultimately decided that the list worked better aesthetically as mono-green. I wanted it to feel like the forest itself was against you; between the elementals, beasts and nature spirits, I had no shortage of cards to choose from in the one colour. Adding red and blue felt unnecessary. Plus, by focusing on a single colour, it gives me more room to explore other themes for future Horde decks, without having to worry about too much overlap. 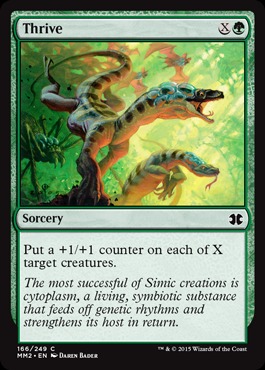 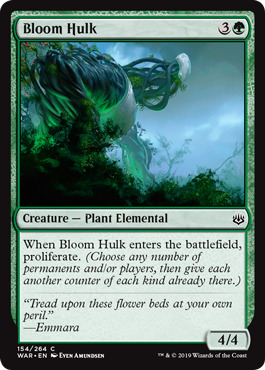 Speaking of overlap, I’ll admit I didn’t plan for both the Druid Hero deck and the Ravaging Wilds to run copies of Thrive and Bloom Hulk. Had I thought about it I probably would have avoided it and chosen different cards to include. That said, I actually like that the lists have these cards in common; the Druid is well versed in nature magic, so it stands to reason they would use some of the same spells that the wilderness uses to protect itself.

The rough version of the Horde deck sat on my table for ages, and the file with the rules slowly got buried in my drafts folder. I would walk past the pile of cards day after day, and it nagged at me. I wanted to finish it. I knew it could work. I just needed to figure it out. Over the next several months I would puzzle idly over the mechanics when I has a few minutes to spare. Unsurprisingly, I didn’t make much progress with this approach. 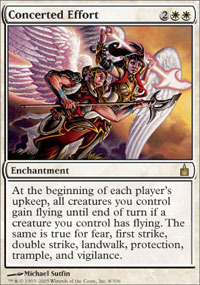 About a month ago I decided to finally sit down with the cards and dedicate some time to doing some concrete playtesting. The best way to find what isn’t working with any deck is always to shuffle up and see it in action, no matter the format. I looked over the list one last time and make some tweaks, then pulled out my Heroes of the Horde and played some games.

I had two specific goals in mind when testing: I wanted to find out how much of a challenge was this going to be, and how difficult it would be to track everything. Magic is already pretty complicated, and Horde magic adds a host of extra rules on top of that. I needed to ensure that turns flowed smoothly, and that the new triggers didn’t get in the way.

It took me a few games before I found a sweet spot that felt streamlined, challenging and fair. Like I said earlier, the Threat Level used to change constantly, which was both bad from a bookkeeping standpoint and for game balance, so that needed tweaking. I also swapped out a couple of cards that weren’t working. One of the copies of Colossal Majesty used to be a Triumph of Ferocity, for instance, but the Party was able to neutralize that threat pretty easily by playing a single big creature.

It took me a while to land on the final version, but it was worth the effort. I had a lot of fun putting together the Journey into the Ravaging Wilds. I hope you enjoy it! 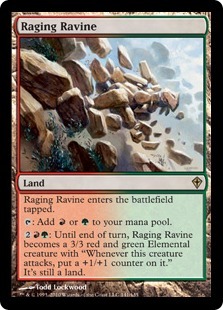 Balancing a Horde Deck for you and your play group can be tricky. Journey into the Ravaging Wilds was built with the Heroes of the Horde lists in mind, which are relatively weak. If you’re finding the game too easy, here are some ideas you can try to increase the challenge:

No Prep Time
The Party gets two turns at the start of the game instead of three.

Without as much time to set up, the Horde deck can easily get ahead, forcing you to play catchup as you fight back against its onslaught of creatures.

Dense Underbrush
The Horde deck reveals and plays one more card than normal on each of its turns.

More Horde spells cast each turn means increased pressure on the Party. That’s one more attacker or removal spell every round and if it’s not dealt with right away, it can quickly get out of hand.

Creeping Doom
Increase the Threat Level by 1 every turn, even when the Relic isn’t in play.

By making the Threat Level rise more aggressively in the early game, it forces the Party to give up resources to keep it in check at a time when those resources are more valuable. It’s easy to discard a spare land card when you have six in play, but it’s a different story when you only have three!

Sheer Desperation
Desperate Measures decreases the Threat Level by 1 instead of 2 (to a minimum of 1).

During testing, the biggest deciding factor in how well things went was whether the Party could keep the Threat Level under three. By making it harder to decrease the Threat Level, it makes it more likely that the Horde deck can kick its spells.

Check the Map Again…
Whenever the Horde deck is shuffled, if the Relic is still in the deck, shuffle it into the bottom six cards of the Horde Deck instead of placing it on the bottom.

By randomizing when the Relic appears, it’s harder for the Party to plan around its arrival. 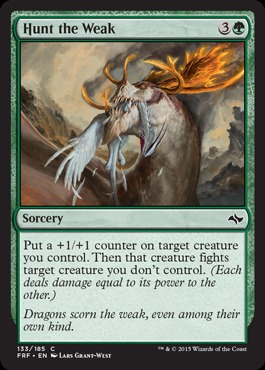