When a deck isn’t working it can be hard to pinpoint exactly why. With my Isperia the Inscrutable commander deck the problem largely involved the costs of the cards I was including. When I first built the deck, I got very excited by my commander‘s ability: whenever she dealt combat damage to a player, if I could name a card in their hand I could search my library for a creature card with flying. It seemed to me that building the deck would therefore be very straightforward; I could include all of the best blue  and white fliers I could find and just beat down with these big, scary creatures. In my excitement I kept finding moreand more of these creatures and may have gone overboard adding them to the deck. Before long I had filled the deck to the brim with six and seven cost monstrosities that looked scary but didn’t actually do that much. I’m sure you can see the problem; I had no early game, and no real path to victory. If all I did on each of my turns was cast a single large creature I would struggle to come back from a losing board state, and I would rarely, if ever, get ahead. This was especially true given that I wouldn’t be making any meaningful plays until at least turn six.

What I needed to do was make some hard decisions and figure out exactly what my deck was trying to do. I went back to the beginning: my commander. There were two key parts to her ability: I needed to have flying creatures in my deck or else I would have nothing to find, and I needed ways to identify cards in my opponents’ hands reliably or else I would be unable to search in the first place. Moreover, the creatures I would be searching for couldn’t all be those large, lumbering six and seven drops I had been including; I had tried that and it didn’t work. The creatures would ideally have an immediate impact on the game, too, otherwise I would be completely at the mercy of my opponents’ removal spells; at least if they had an effect when they entered the battlefield I would get some value off of them before they were killed. What I really needed to make was a toolbox – a collection of cards that would potentially have a narrow utility but could serve as answers to specific problems. By searching for them with Isperia I could choose what I needed based on the immediate threat. But my toolbox would be useless without a way to enable my general’s ability to search my library. I needed to start with ways of knowing what my opponents had in their hands. 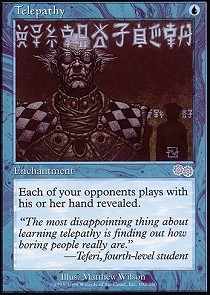 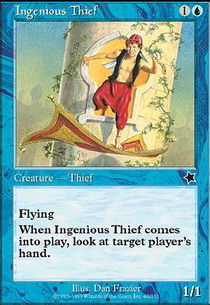 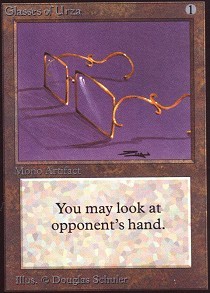 The most direct way of knowing what an opponent has in their hand is simply to look. Telepathy was the best card for this, as it reveals all of my opponents’ hands while keeping mine a secret. One card that synergizes with my commander was not enough, given how important using her search ability was going to be. I decided to add a certain degree of redundancy in the form of Glasses of Urza and Ingenious Thief. The latter also serves as a cheap flying creature, which can be useful in its own right.

While looking at a hand is great, it came as quite an epiphany when I realized that one of the best ways of knowing what cards are in an opponent’s hand is to put them there myself with ‘bounce‘ effects that return cards from the battlefield to their owners’ hands. Most commander players know how good Cyclonic Rift is, but mass bounce spells like it, Evacuation and Wash Out are doubly good with Isperia the Inscrutable. Not only do they help to reset the board state, but it makes naming cards for my commander’s ability trivial, so long as they don’t recast everything. Mist Raven serves a similar purpose, albeit on a smaller scale. Still, being able to search for it with Isperia makes it worthwhile to have, and like Ingenious Thief, sometimes you just need a cheap creature to play.

Perhaps the strangest card that enables my commander‘s ability is Strionic Resonator. Because my opponent has to reveal his or her hand after I guess a card, being able to guess twice in a row means that at the very least I will have perfect information for my second guess. Fireshrieker or the new enchantment Duelist’s Heritage would also serve this function by providing double strike, but Strionic Resonator also works well with the rest of the creatures in my deck; being able to bounce two creatures back to hand with Mist Raven, for instance, should not be understated. Still, maybe one of those other cards will find its way into my deck sometime in the future. 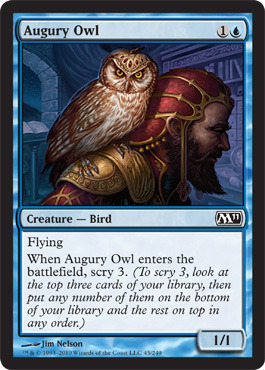 Once I felt that I had enough ways to enable my commander’s ability, it was time to find cards that would serve various purposes. I decided that, among other things, I would need ways to draw extra cards, buff my creatures, get creatures back from my graveyard, and ways to directly answer my opponnets’ threats. It was quite the grocery list of requirements.

Thankfully, there are several Blue creatures that draw you cards, and a number of them have Flying. Mulldrifter is perhaps the most famous of them, allowing you to Evoke it, saving some mana if all you want is to draw cards and don’t need the creature. The newer card Cloudblazer effectively acts as a second copy of Mulldrifter, with some life gain to boot. Even the lowly Augury Owl helps with card selection with its Scry ability. Sphinx of Uthuun and Windreader Sphinx have the potential to generate massive card advantage, and while they do cost seven mana, their abilites are both strong enough and immediate enough to warrant their inclusion. After all, I had to keep some high-cost cards in the deck or I would have nothing to play in the late game!

Individual big creatures clearly weren’t the answer, so ‘going wide’ and playing multiple smaller creatures or token generators is the natural alternative. Cheap cards like the aforementioned Ingenious Thief and Augury Owl, and token producers like Emeria Angel and Wingmate Roc fit the bill, but aren’t very impressive on their own. Being able to buff those creatures with cards like Thunderclap Wyvern, Sprite Noble, and Angel of Jubilation is key to turning them into a serious threat of my own. Plus, considering that my deck doesn’t have any infinite combos, winning by combat damage is my only real option. Having these flying ‘lords’ to buff my creatures can help keep me alive by having larger blockers, and can help me close out the game faster once I go on the offensive.

It’s always important to consider what role the graveyard will play for your commander deck as well. Being able to reanimate a key creature could make all the difference to the outcome of a game, and being able to chain together multiple reanimators can help a great deal in grindier matchups. Karmic Guide is one of the best creatures for this purpose, and it flies to boot! Being able to search for it when I’m in a winning board position means that if an opponent eventually finds an answer to my threats I can get back my most important creature that died. By including other ways to get my creatures back from my graveyard, like Angel of Serenity and Emeria Shepherd, I have the ability to chain them together to rebuild my board position even after someone destroys everything, making my deck extremely resilient.

Of course, the best way to keep my board position stronger than my opponents’ is by having answers of my own to their threats. Cards like Silumgar Sorcerer, Spell Queller and Glen Elendra Archmage can all stop threats as they’re being cast, Stonecloaker and Angel of Finality can prevent my opponents from getting back cards from their graveyards, and Wispmare, Steel Hellkite and Sunblast Angel can all deal with different threats on the battlefield. There is also the option of simply taking control these threats with Sower of Temptation, Hypnotic Siren and Roil Elemental….

But one of the creatures with flying that I was most excited to include in this deck once I started tweaking it, was the underrated Shoreline Ranger. Along with Pilgrim’s Eye and Eternal Dragon, this card did one thing I knew the deck would need: it gives me a way to indirectly search for lands using Isperia the Inscrutable. Shoreline Ranger‘s Islandcycling ability allows me to discard it to search my library for an Island and put it into my hand. Even with all of the changes that I made to the deck, it still requires a lot of mana to function well, and having a way to ensure that I hit those land drops consistently is perhaps one of the most important bits of utility in this deck.

Here’s the complete decklist. If you look closely I’m sure you’ll see a lot of little synergies start to pop out, too:

Having access to this wide variety of tools has not only made my Isperia the Inscrutable deck a lot more fun to play, but it has made it one of my most competitive decks to boot. The deck now has enough early game creatures to put significant pressure on slower combo-based decks as well as deter early attacks from more aggressive decks. By gaining knowledge of my opponents’ hands I can also get a better sense of who the real threats at the table are, and what creatures I should be searching for to stop them.

It just goes to show that when things aren’t working out with a deck, sometimes its worth going back to the beginning to determine exactly what the deck is trying to do. You might need to overhaul things, and that can be hard to do, especially if you’ve dedicated a lot of time and effort into making your deck the way that it is. But in the long run you’ll probably be much happier with your deck if you’re willing to remove the parts that aren’t working.

At least, it’s worth considering.