With the release of Double Masters, there are a lot of new toys for Pauper players. Perhaps the most notable addition to the format is Myr Retriever, especially given its interaction with Ashnod’s Altar. Two Retrievers and an Altar can loop indefinitely, sacrificing one Myr to return the other from the graveyard and refund its casting cost. With a Disciple of the Vault or Reckless Fireweaver in play to benefit from these artifact creatures chasing each other to the grave, you could potentially win the game as early as turn three. 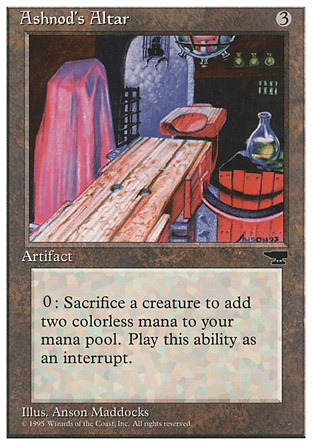 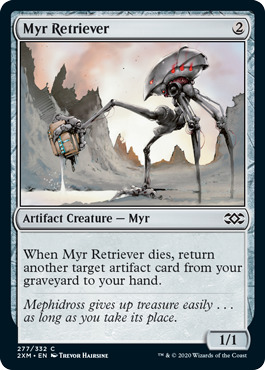 If you sacrifice a Myr Retriever to Ashnod’s Altar, you get two mana back… exactly enough to cast a second Myr.

I’ve always been a fan of this combo, having stumbled across it for my Glissa, the Traitor Commander deck several years ago. Granted, in Commander you need something like a Mirrorworks in place of a second Myr Retriever to make it work, but the principle is the same. When Wizards of the Coast unified the Pauper card pool in 2019 it officially added Ashnod’s Altar to the format, and I got very excited at the idea of cobbling together Altar combos in another format. I immediately started puzzling over how to make this combo work in the format, and while you could do it at the time with two Workshop Assistants and an Etherium Sculptor, it was just too clunky and unreliable. I shelved the project and moved on to other things. 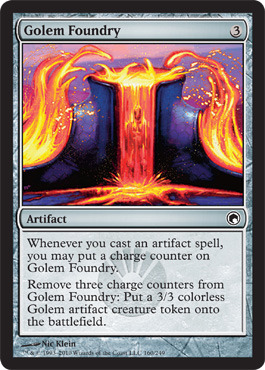 This all changed when Myr Retriever hit the format. Suddenly this combo was not only viable, but it looked competitive. I dug out my old notes and started puzzling all over again. I wasn’t the only one, either; Caleb Gannon put together a sweet deck using this combo and Golem Foundry as his payoff card, which I thought was really innovative. I’m not one to just build the same deck as someone else, though, and while I think Caleb’s list and the direction he took the combo is ultimately stronger, I still wanted to put something together that fit my play style.

I struggled quite a bit with the general game plan of this deck. Was it trying to be an Eggs-style deck that churned through its library for value? Was it just trying to put together the Altar combo and win with Reckless Fireweaver triggers? Was it trying to generate a ton of mana to cast a massive Kaervek’s Torch? Was it just going to make an army of Golem tokens and win with combat damage? All of these ideas could work, but there wasn’t enough room in the deck to do everything. I kept making cuts until I had something that resembled a playable list. It was tough; I really wanted to recycle my whole graveyard with Drafna’s Restoration, or try recurring Myr Servitors every turn so I could sacrifice them to Sage of Lat-Nam, or one-shot my opponent with a Scrapyard Salvo, but these plans felt very fragile. Most Pauper strategies would either overpower them, or shut them down in a heartbeat. Still, they sounded like a lot of fun; I might have to revisit them some day. 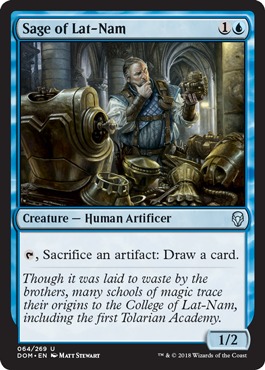 What I ended up with for this deck is still probably too slow to be effective, but it still has a few tricks up its sleeve. I think that Sage of Lat-Nam has a lot of potential in Pauper as a cheap way to draw extra cards; if left unchecked it can turn the likes of Chromatic Star into a one-mana Divination, after all. I’ll admit that it’s not the fastest source of card advantage (it’s hard to compete with Mulldrifter and Ephemerate), and it is vulnerable to removal, but it feels like the sort of card you need to deal with or else you’ll fall behind. Cards like Myr Sire or Gleaming Barrier give you multiple artifacts to sacrifice over the course of a game, and the Sage even pairs well with the artifact lands, providing protection against mana flood. If you have ways of untapping the Sage of Lat-Nam, like a Mirran Spy, you can also speed up the card draw and dig through your deck with a chain of cheap artifacts. Myr Retriever and Workshop Assistant even turn this into actual card advantage by getting back artifacts so you can sacrifice them again. In a pinch you could even use the new Archaeomender to give the Sage more fuel in the same way. 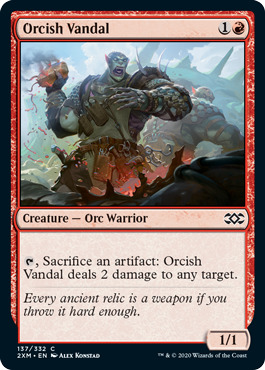 Also of note in my list, Orcish Vandal was downshifted to common in Double Masters. It’s a nice upgrade from Orcish Mechanics and Embraal Gear-Smasher as a way to turn artifacts into Shocks, although I will admit that Gear-Smasher is a much better blocker. I opted for the Vandal over Reckless Fireweaver as a payoff in my deck for a couple of reasons: While it doesn’t outright win the game with a Myr Retriever loop, it can target creatures with its damage, giving the deck more ways to interact with the opponent and letting it play the control game. Also, in games where I haven’t drawn an Ashnod’s Altar, the Orcish Vandal gives me another way to sacrifice Myr Retriever for value; sometimes you need the Myr to die to get back a better artifact, and dealing two damage to something is a nice bonus. Plus, while it’s much slower than an infinite loop, an Orc throwing a pair of Myr at your opponent over and over again is sometimes enough to win a game. In contrast, Reckless Fireweaver can block pretty well on the ground and can ping your opponent a few times when you aren’t pulling off a combo, but it doesn’t do much to help you get back into the game if you’re falling behind. There’s an argument for running both the Vandal and the Fireweaver, but if I was doing that I’d need to rework most of my deck. 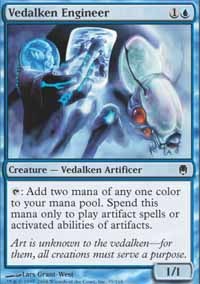 I’m not convinced I’ve built a masterpiece here, but it’s a starting point. For one thing, it’s probably running too few lands; its mana curve effectively ends at three, and the Lotus Petals are intended to make up the difference, but even still, I suspect it would need more mana sources in practise. More mana would also open up the possibility of more expensive cards, like Faerie Mechanist, which would be a decent addition. I will mention that I was very tempted to include Vedalken Engineer as a mana creature, and I still think it could be a solid choice. I do like the synergy between it and Mirran Spy, but I wanted to make room for some other things. Still, I might try it in future iterations of this deck.

With my preference for paper Magic and the state of the world right now I’m not sure when I’ll get a chance to properly test this deck out, but who knows? I might have to give Magic Online a try one of these days and run this deck through its paces to get a feel for what needs fixing. If you have any suggestions for the list, please let me know. It’s a rough draft, to be sure, but I think there’s something here. With a bit of polish it could be really fun.