Hey all. I recently went to time in a match of magic and am extremely salty about it so lets not waste anymore time and get into it: Lately I’ve been hearing a lot of people talking about the Expected Value of local tournaments. Stuff like “Oh the EV isn’t that good for that tournament so I’m not going” or saying “Wow the EV sucks” after the judges announce how many packs are in the prize pool. My question is why does that even matter? The people who play this game for a living are very few and far between and are pretty much the only people who should be so concerned about EV. We’re not even talking cash 99% of the time, we’re talking about prize packs of magic cards. Which are random and often contain cards you won’t use or already have and sell for very small amounts to vendors. You can’t even use these cards to buy your entry to your next low EV event, so I really don’t get all the fuss. First and foremost this game is just that, a game. Many people primarily play for fun, others play for competition, but if EV of a GPT is causing you to sit at home and not play magic at all then I think you should maybe question why you play this game in the first place. It’s funny, because the same people that whine about low EV tournaments are the same people I never see make a cheap trip, the rare time a GP or SCG event is close to their nest, which aside from some very exclusive events like the pro tour are the best EV tournaments you’re going to get. Keep grinding those FNM’s I guess bud gotta hustle hard for those 6 pack 4-0’s.

Meta meta meta. There’s a lot of words like this one that I used to like using to discuss things about magic but it’s so over and misused that it’s lost its meaning. Day in day out you see posts like “What meta decks are currently viable in my local LGS current modern meta?” and you just want to slash your eyes out. It seems like people can just attach meta to anything and everything and that’s just what they’re doing. There’s meta decks, meta choices, meta considerations, local meta, online meta, draft meta, out metaing the meta. Maybe I don’t understand what metagame is supposed to mean, maybe I’m just out of the loop, but I don’t think so. To me a metagame is when you play red at your kitchen table so your friends get fed up and start playing feed the clan maindeck. Now you start playing leyline of punishment because you need to punish their life gain strategy, and so they start maindecking enchantment destruction. There is a subtle game within the game on what decks you bring to the table because of what you know you’re going up against. When people ask “What’s a good meta deck in the upcoming standard meta” right after rotation, it’s just ridiculous. First of all what’s a meta deck? Second of all there is no standard meta because standard just rotated and no tournaments have been played yet. It’s got to the point where the only way I can maintain sanity is by redefining the word meta into “Loosely describing something relating to the best decks” because that’s all what most people mean by it. If you use the word properly, such as describing a choice you are making based on what choices you know other people are going to be making before you sit down and play, then pat yourself on the back, that’s metagaming. If you’re discussing a sick meta pick a player made against the meta decks at the local LGS FNM meta after a recent shift in the modern meta to a more mythic rare meta… Well I probably shouldn’t say what I actually want you to do so please, just stop. 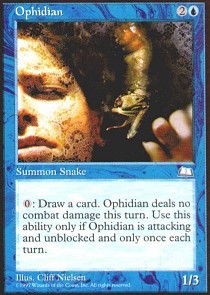 News flash! 2002 was almost 15 years ago. Nickelback was like, kind of cool, people knew who Ashanti was and the Toronto Maple Leafs were relevant. Wanna know what else was relevant? The decks that magic “purists” believe were “true” control decks. You know these guys, they sit in the back of LGS’ playing Commander and complaining how Standard these days is unplayable because “creatures are for little kids”. These are the same guys who still talk about the one 16 person PTQ they top 8ed in their career playing UB control with one Rainbow Efreet as their only win-con.

Things evolve. Ashanti is gone, Chad Kroeger is married to Avril Lavigne and 5 mana spiders are relevant in constructed formats. There is nothing wrong with playing Commander and reminiscing about the good ol days of “pure” magic. But don’t look down on me and my “newb combat math” like I’m a leper. I’m sorry that I don’t believe a deck full of spells that don’t let my newer player opponent resolve any of their freshly cracked dragons and angels is healthy for the game.

Magic is taught as an on-board game, not as an in-hand one. Standard being the flagship for this is perfectly fine. If you can’t win when the game is about combat math rather than just blindly countering every spell your opponent plays because you believe the only colour that should get card advantage is blue than it sounds like you have the problem.

If you can’t adapt, it’s you, not Timmy and his giant Hydra. Magic is hard, Magic is fun, regardless of what deck you play. Patrick Sullivan once said “it may not take a lot of skill to cast a Primeval Titan, but how much harder was it to know to mana leak it”

1) The person who plays decks just to try and make people salty:

Continuing with our theme, here’s the next type of player that just salt’s me out of the local LGS meta. I suppose they’ve completed their goal if they’ve made me this salty, but whatever it’s a stupid goal to begin with. Have you ever seen players who act like this? There are five different links there, and the last one in particular is just the worst. I haven’t even played against that player and I’m already foaming from the mouth with salt. I just don’t understand the rationale behind this type of play style. They think they’re some sort of anime villain that when they leave the room everyone will be like “Damn that guy makes me so salty! I hate playing against him! Please never again! I can’t take it!”. They want to be infamous in the game of Magic: The Gathering. They want their opponents to fear being paired against them in the tournament. Those are the only reasons I can think of. And for some reason third party companies print accessories for these people, I mean I guess it’s a good play considering there are so many of them but the accessories just add to the salt. The salt shaker sleeves, the “Y so salty” or “U mad bro?” playmats… just awful. Generally this is a horrible strategy because the decks that are the most salt-inducing are usually pretty bad at winning, and in fact you’re probably more likely to make yourself salty by losing to your bad eggs deck than you are to make your opponent salty the 1 in 8 games where your combo actually comes together. I played a lantern player once that after winning game 1 told me he plays the deck just to see how salty his opponent gets. There isn’t a doubt in my mind that guy headed straight for the water fountain after I hurkyl’s recalled him out of both post board games, especially after game 3 where he lost 2 glimmervoids in the process. You want to consistently make your opponents salty? Play good decks, and play them well. They’ll hate every time they’re paired against you because you’re likely to win, and people who win don’t get salty, people who lose a lot do. But hey if you’re not into being a filthy scummy spike and want to guarantee someone gets salty, try your hand at something like Desolater Magic’s Beholder deck, just don’t be upset when the salty person ends up being you because your deck doesn’t function.