Hey all, welcome to Salt Road Patrol, it’s the Christmas season but to be honest, I’ve got a lot of problems with you people, and you’re gonna hear about them. 4) Living in an MTG Void area:

I’m not sure how true this is for other cities, but for where I live, good magic tournaments are too few and far between and it’s rather salt inducing. If you live in some places in the US, you can get to a big SCG event or GP every weekend within a few hours drive. If you live in Winnipeg, Manitoba, the closest GP is about an 8 hour drive to Minnesota where your dollar is so bad literally everything is 33% more expensive and the weather is just as awful. The next closest is maybe ~14 hours away to Calgary, which is just ridiculous so you pretty much have to fly to any other GP. SCG events don’t exist anywhere within driving distance and so this is what you’re left with: around 2 PPTQ’s a season if you’re lucky, barely any GPTs and weekly standard events that are pretty bare unless standard showdown packs are being rewarded. I recently made the mistake of using wizards event finder for a town in the US, and found out they could hit 1-2 PPTQs almost every weekend for the foreseeable future. The luck of some people. I’m sure this can be extended to those who don’t like playing in large tournaments too, there are likely people who want to play more commander or draft and don’t get their fix as much as they’d like, but to be fair I don’t play either format often so I don’t know, just trying to appeal the masses here cut me some slack. Since vintage cube is back for a short while (actually I think it’s already gone again.. RIP) on magic online, a lot of people who normally don’t use the client are on it and playing some cube. What I hear a lot though, from people who don’t use magic online regularly or have even tried it, are complaints about how terrible it is. This is just a classic case of internet circlejerking and it needs to stop. I don’t play infinite magic online but I’ve played well over a thousand games on it and can count on one hand the times where something has gone wrong. But the vast majority of the internet seems to think there’s a problem so as soon as someone mentions magic online, people who have never even created an account, pipe up about how awful the software is and how wizard’s programmers couldn’t code their way out of a wet paper bag. The reality is that for what it is (a digital representation of a complex game with tens of thousands of unique cards interacting with each other) it’s pretty damn good and deserves some respect. And when things do go wrong? You very simply make a ticket and after a short time you are refunded the entry fee of whatever you event you were in. It’s great software to play more magic, especially if you live in the MTG void of Winnipeg and I’m sick of people bashing it.

Man this one is a real tilt-string puller. I’ll admit I’ve complained about my fair share of top decks, especially when I was a newer player, but at some point it clicks that hey, you top deck people all the time too, it’s just part of the game. I can sympathise with those who are in a high pressure game, maybe for top 8 or for a tournament win or for prizes, and you get top decked and lose, but for every time that happens there will be a time when you do the same if you play long enough, or perhaps it’s already happened and you’re just breaking even now. What is the real tilting part about this subject though is the players who complain to their opponent after the top deck. It doesn’t even accomplish anything, you still lost the game like a buster and in fact when you complain about it it just makes the person who top decked you feel even better, because let me tell you not many things feel more satisfying than signing a match slip with a 2 next your name while your opponent whines and cries like a baby about how lucky you are. Better lucky than good right? Seriously do yourself a favour and just keep your mouth shut, you look like a spoiled child who didn’t get the right colour of pokemon for Christmas. But for those of you in the lucky position of top decking a sore loser, my advice is to have some nice one liners at your disposal to add some sweet sweet salt to the wound. One of my favourites after something like “Wow what a top deck I can’t believe you drew that” is just a crisp “Thanks I was up all night practising to pull that one off”. It feels great and their reactions are always priceless. 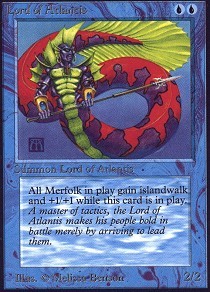 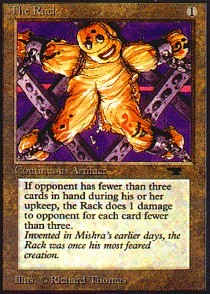 You ever play with someone who’s not really playing Magic The Gathering as much as they’re really playing Magic The Gotteming? I’m sure you know the type. They’re the kind of people who want to get antique versions of The Rack in their 8 Rack deck so a lesser experienced player might call a judge in a match of modern because they don’t know The Rack is legal. Another prime example is players who intentionally play with Kamigawa Gifts Ungiven’s because it says “Choose four cards” instead of “Choose up to four cards”, so a player who isn’t 100% sure how gifts works might let it resolve and then be upset when they realise the gift’s caster can search out just two cards from their deck and put them right into their graveyard. These players are some of the worst to ever touch the game. They don’t want to win using superior strategies or deck building or decision making. I mean they actually probably do but they suck at all of the above so they resort to trying to find loopholes or ambiguous rules to confuse their opponents into a misplay, or worse an illegal play in which the scumbag gotem player can call a judge and get their opponent a game or match loss. The most tilting thing about it all though is that they think they’re somehow outsmarting their opponent by doing all this, that their some sort of mastermind genius player that knows the rules and can “outplay” you by knowing how niche interactions need to play out or how some cards have a different oracle text than what is actually on the card, things like Lord of Atlantis (Is he a merfolk? Does he buff himself? Hard to tell if you have different versions of the card in play with different creature types and card text isn’t it you scum lord) These players just make me sick and as soon as I realise I’m playing with one I get mega salty, all we can do is defend ourselves and hopefully they’ll go play something else once they realise they suck and can’t actually win a game without screwing someone with complicated rules and interactions.
This one was a bit long and I apologise for that, I usually like being short and to the point, so thanks for making it to the end. I’ll leave you all with a nice screenshot of my pal Filip rubbing some salt in the wound of what appears to be a very upset cube player getting beat down by Grave Titan.