If you’re looking for part 1 of this threat assessment series, you can find it here.

Last time we talked about a few basics of threat assessment. This week we’re going to dive right in and use some of those basics to talk about some more advanced threat assessment concepts. Fair warning, this installment is going to skew a little more towards the competitive side of the spectrum, but the concepts are definitely applicable to having fun with your friends as well.

I’d like to start with this example board state. It’s a situation you’ll see fairly commonly in a competitive EDH game, so I’d like to run through a few things I’d consider when presented with this type of situation. For the purposes of this article, we’re going to assume that Boonweaver, Tazri, and Teferi are the common decklists you’ll see in a competitive EDH primer. My Nin decklist and primer can be found here, and that’s the list we’ll be talking about:

These are just a few thoughts based on the board state and some Turn Zero Threat Assessments I would have done before the game started:

These are some pretty important questions once you get to a certain point in an EDH game, and being able to recognise your last untap step of the game as it happens is a pretty great skill to have. In the scenario above, I’m pretty close to threatening a win on the next turn if I play my cards right, but there’s a ton of stuff to think about. Ideally, I’d love to put my head down and use Muddle the Mixture to grab Power Artifact, Trinket Mage to grab Walking Ballista, and bounce the Cursed Totem with Chain of Vapor. Doing all of these things would cost me 1UU (Muddle the Mixture) + UU (Power Artifact) + U (Chain of Vapor) + U (Trinket Mage, paying for the rest with my Monolith mana). UUUUUU is pretty rough, and it means I’ll have to split this up over at least 2 turns because I only have 4 sources of U on board. Nin is also an option as a sink but it would cost me just as much blue and one additional red mana to pull it off. 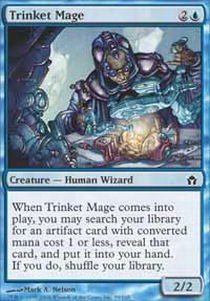 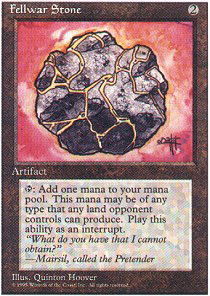 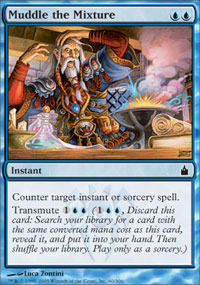 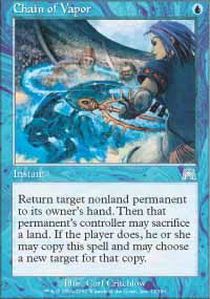 The way I see it, I have 5 major lines of play available to me:

Lines 1 and 3: are pretty aggressive plays. Because they’re conditional tutors, I have to reveal when I’ve chosen a card. Grabbing Walking Ballista instead of something like Mana Crypt signals to the table that I would gain more benefit from having a mana sink in my hand than an additional 2 mana on board, which suggests I’m close to comboing off.

Lines 2 and 5: conversely, are pretty defensive plays. By grabbing Pithing Needle I’m committing to dealing with only one of the 3 threats on board (Tazri potentially casting Demonic Consultation, Boonweaver blowing up my Grim Monolith instead of Cursed Totem, and Teferi), and in doing so I’m not leaving any mana up at all to interact with what might happen.

Line 4: is just right. It’s definitely not the splashiest play I could make, but it sets me up well by increasing my access to coloured mana and doesn’t paint a target on my Grim Monolith.

If the stars align, Boonweaver casts Harmonic Sliver and Teferi’s spidey sense goes off. Because Boonweaver doesn’t choose a target until the spell resolves, it may force Teferi’s hand and bait him into countering it. This further clears the way for me on my combo turn, because I’m taking a pretty big risk by going off with no countermagic backup. 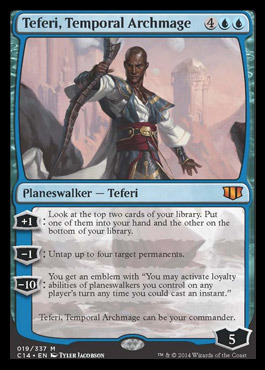 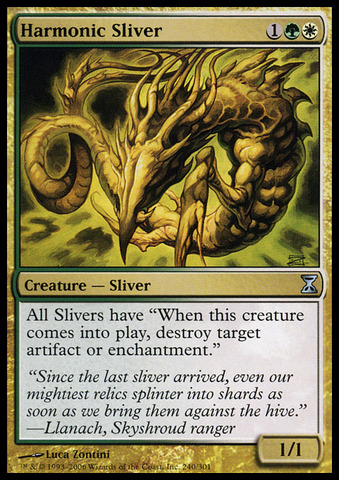 Now I know a lot of you don’t play competitive EDH, but this is the type of thought process you can put into determining the appropriate action to take on your turn:

This question comes up essentially every time you have the opportunity to disrupt your opponent. I’m going to get into this a little more in the next article, but tutors and disruption can be your most important tools in a multiplayer game. Rather than looking for the first opportunity to cast your counterspell, you should be asking yourself “Would it really be so bad if I let this slide?”. You don’t want to be hellbent or F6ed in the late game because you burned your only disruption on a modest threat.

In the above scenario, taking line 4 and passing the turn offers me a ton of opportunities to cast an excellent disruption spell – Chain of Vapor. Going in turn order, these are the things I’m likely to see, and how I can use Chain of Vapor to interact:

This is pretty loose, because Teferi’s immediate lines to victory are pretty specific. If he has Chain Veil in hand he could pull some fast mana shenanigans like High Tide + Snapcaster Mage + High Tide + Mana Crypt to cast Teferi, untap all his islands, and cast Chain Veil for the win. I wouldn’t count on something like this unless they’ve been casting nothing but tutors all game, but every once in awhile you’ll get burned because they have it. There’s nothing wrong with that.

Using Chain of Vapor as disruption here is tough because once Teferi sticks, its controller has priority and will get to untap 12 mana worth of islands. Chain of Vapor can bounce The Chain Veil in response to its first activation or in response to Teferi’s first untap, but neither of those are going to stop this combo in its tracks.

The only saving grace here is that we’re the last to act, so it’s entirely possible that Tazri or Boonweaver step in to prevent the game from ending. 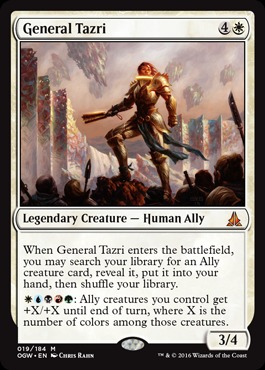 As I mentioned earlier, this deck has the potential to exile a chunk of its library to find Food Chain, which often puts either Eternal Scourge or Misthollow Griffin in exile, ready to start the Food Chain combo. If he doesn’t make his land drop, Tazri has to cast Food Chain, exiling one or both his mana dorks to cast either of his combo pieces.

Chain of Vapor does a good job of bouncing Food Chain here with the Scourge or Griffin on the stack, and it’ll buy us a turn if we absolutely need it to.

This is the big wildcard. Harmonic Sliver is probably coming down this turn, and Boonweaver could target my Grim Monolith or Teferi’s Cursed Totem. With the creature spell on the stack, I could:

Bounce my own Grim Monolith, which forces Boonweaver to pick the Totem.

This is actually a pretty tough decision. Bouncing the Grim Monolith allows us to tap it for Mana and get in that X=5 Nin activation as soon as Boonweaver changes steps, but it puts us a full turn behind on executing the combo. There’s a small chance we draw into some fast mana like Ancient Tomb or Mana Crypt, but at the very least we’re pretty much guaranteed another land drop in those 5 cards, which continues to advance us towards the UUUUUU we need to execute the combo. If Teferi counters the Harmonic Sliver we’re basically in trouble because we can’t activate Nin, so that would be the biggest risk of going with that option.

If Harmonic Sliver resolves, the ETB trigger goes on the stack and Boonweaver has to pick a target for its ability. Absolute best-case scenario here, he chooses Cursed Totem (maybe with a little gentle encouragement). Worst-case scenario, he chooses Grim Monolith and we’re forced to bounce it in response. This allows us the opportunity to sacrifice a land to bounce Cursed Totem if we really wanted to, but given our shortage of coloured mana I don’t think it’s a great idea to get greedy.

Bouncing the Grim Monolith with the creature on the stack is definitely the most conservative route, and it’s probably the way I would go. I love drawing cards, because cards represent options. Drawing 5 restocks the pantry with disruption, land drops, and combo protection that we’ll need if this game is going to last at least 1 more turn.

Wrap it up, Jim. You’re rambling.

I could talk for hours and hours about board states and optimal lines, but at some point we have to tie a bow on this and call it a method of threat assessment when the game is close to wrapping up. Can we condense it into 4 steps? Let’s see.

That pretty much sums it up! Next time we’ll be talking about some things I see in real games, and if any of you want to send me a snapshot of a game, I’d love to analyse it! Try your best to format it like I have above and I’ll include the best ones in my next article.