Hello everyone and welcome back to another episode of Delving with Devin.

Something every Magic player experiences is variance.  What is variance as it relates to Magic?  Variance effects basically everything to do with Magic. Everything from who you’re paired against in a tournament, what decks you’re paired against,  what your opening seven cards are, what your opponent’s opening seven cards are, and then every single card you and your opponent draw is a contributing factor to variance.  Variance can keep strong players from winning, and it helps weaker players achieve greatness (in the short term).  It’s fair to say that if you’re a stronger player you’d like to reduce or eliminate variance from your gaming experience to realize your true win percentage.  In this article I will cover some things you can do to help reduce your variance, and ultimately help reach your EV (expected value of win rate). 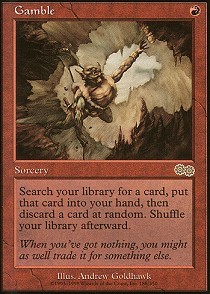 To simplify what variance is, lets pretend that you’ve entered a dice-rolling competition instead of a Magic tournament.  The rules are simple: there is a 20-sided die, and if you roll 1 through 10 your opponent wins. If you roll 11 through 20 you win.  Given these variables, its safe to say that you should win half of your matches and lose half of your matches.  In a 10-round tournament, you should be expected to end up with a 5-5 record.  That’s not accounting for variance however; you could end up with 2 wins and 8 loses and be running below EV.

My first piece of advice to help negate variance, is to play in more events.  If you play in very few events, then any variance will be much more noticeable and sometimes punishing.  The more events you play in, the closer to the expected value your win-rate should run.  If you only play in one tournament a month, you could get mana screwed a few matches and have a very low win percentage.  But, if you play in events every week, you’re not as likely to be mana screwed every match and thus will have a lot of wins to balance out those mana screwed losses.  You can prove this to yourself by flipping a coin 10 times.  You should end up with 5 heads and 5 tails, but in reality you will probably have differing results.  Now, if you flip this coin 100 times you should be closer to 50-50 percentage wise.  The more times you flip, the closer you become to reaching expected value. 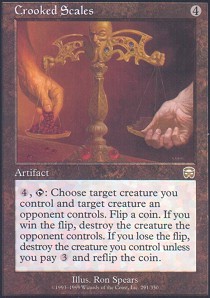 The next thing you can do to reduce variance is to literally improve your game?  I feel that if you have a edge over your opponents, you can overcome most levels of variance.  Let’s use the dice-rolling tournament example again.  In order to represent your skill advantage, lets say if you roll a 1-5 then your opponent wins, and if you roll a 6-20 then you win.  The chance of rolling a 1-5 multiple times in a row is much less then the chance of rolling 1-10 multiple times in a row.  Combine this with playing in more events, and you should be crushing variance.

But Devin, what if I have a busy schedule and I cant play in more events then I already do, or I only play in the premier events and always get mana screwed.  Good question!  My next piece of advice is something I’ve been doing for a few years and it’s been working fairly well.  Most competitive Magic players have a friend or a group of friends that they playtest with for events.  My suggestion is to enter all larger events that you’ve playtested with a friend of comparable skill level for as a chop.  What I mean, is lets say you and a friend are entering a $1,500 tournament, and you’re both of the same approximate skill level.  What you can do to reduce variance, and effectively increase your sample size, is to enter the event chopping your total prize winnings.  If you’re of equal skill level, then this should help you run closer to your EV (expected value).  You’re both just as likely to get mana screwed, you’re both just as likely to get bad pairings, and you’re both just as likely to mulligan to oblivion every match.  Except this time if you or they do, at least all of your eggs aren’t in your proverbial one basket.  This tournament you run good, and you each get a good prize, and next time they run good, and you both get a good prize.  Keep in mind that this only works if both players are close enough in skill level to make it worth while.  If you are a significantly better than they player you are chopping with, then this won’t overcome variance, as you’ll be effectively playing toward a lower average EV.

My final piece of advice to help curb variance is in your deck selection.  Wizards has done a great job at completely switching how Magic is played from its original conception.  Think back 20+ years, a time before planeswalkers, and before spell-based combo kills.  People were literally winning by attacking with Serra Angels and Erhnam Djinn.  In this world, cards like Swords to Plowshares, Wrath of God, and Counterspell reigned supreme.  These cards literally could answer every single threat in the game, very efficiently, so playing a reactive deck made a tonne of sense.  Looking at modern Magic however, the threats are much more diversified.  We have powerful planeswalkers, combo kills that don’t even use the battlefield, and various other win conditions like milling your opponent out.  The answers aren’t quite as effective, Fatal Push misses a lot of commonly played creatures, Wrath of God effects don’t hit planeswalkers and grapeshot triggers dodge them nicely; counterspells are much more narrow and often times miss the target.  My suggestion for modern Magic is to be the one asking the questions, and not be the one looking for the answers.  By doing this, you remove an entire section of variance from your game.  All you need to do is draw the cards you need to defeat your opponent, and not draw the cards that need to interact with your opponent, and in the right order.  (Ever draw a counterspell the turn after they cast their threat, or draw the removal spell the turn after they got value off their creature?)  In summary, be proactive and you won’t have to rely on drawing the answers!

I hope these tips can help you realize your true equity in Magic, and keep slinging those spells!