Welcome back to this weeks episode of Delving with Devin, today we’re going to be looking at the newest set about to be released, Amonkhet!

Today I will be giving my opinion on the set, how it will effect eternal formats, and the mechanics in general. First of all, lets start off with the elephant in the room, the master pieces! 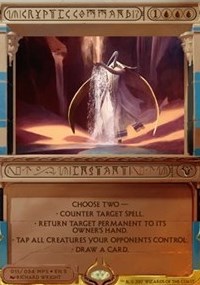 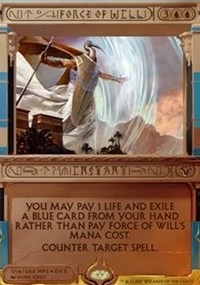 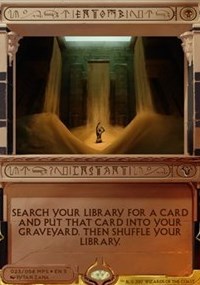 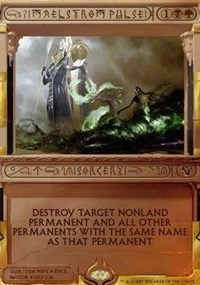 Generally speaking I like the idea of master pieces, as it is a way to get older, out of print cards into circulation. However that being said, I have some concerns with the master pieces. Foils? Why do they all have to be foil? I get it, people like shiny things, but some people, myself included, hate playing with foils. Foils over time can start to warp, and essentially become marked cards.

I’d like it if the master pieces could come as foil or non foil to give players such as myself the opportunity to run these art works if so desired. Another reason for master pieces to exist, is there was a growing concern among standard players that playing standard was just too expensive. Needing to constantly update lists was costly, especially when each list typically runs 4 of certain mythics. In order to update lists, change lists due to meta changes, or just to keep the game interesting, it would cost a lot of cash! 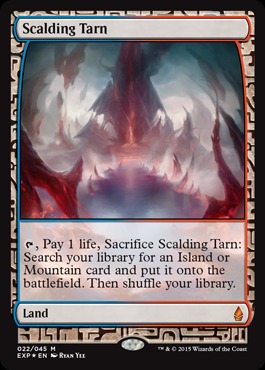 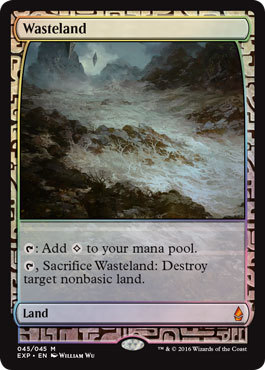 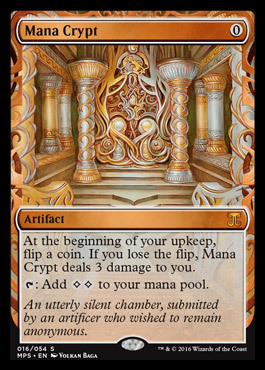 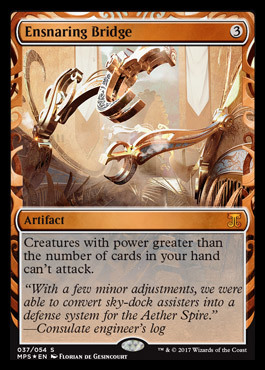 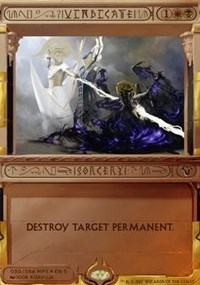 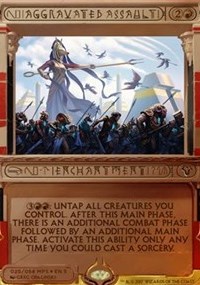 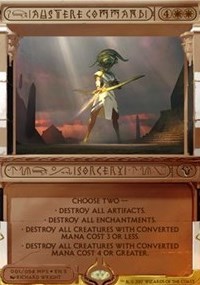 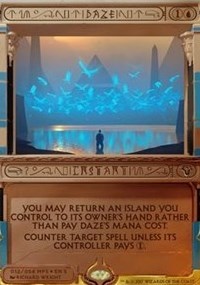 Wizards, get on it! Another concern with the master pieces in Amonkhet is specifically the choice of borders and text. Now this is completely subjective and open to opinion, however in my opinion these borders seem to be way out in left field, and they don’t have a Magic: the Gathering feel to them. The one good thing about them though, is it shows that wizards is in fact willing to do anything, so what the future holds could be very exciting, as the next set they may hit the borders right out of the park! (Editor’s note, I actually like the new border)

Now that we’ve got the master pieces out of the way, lets delve right into the mechanics, and how I feel they will effect game play!

Cycling: mmmmmm Cycling, the perfect mechanic in my opinion! Wizards needs to play a balancing act with variance in magic when designing a new set. Too much variance and the games are not fun because you feel like there was nothing you could do, and too little variance and the games are not fun because the stronger player will just win close to 100% of the time. So we need a Goldy Lox and the three bears scenario, where the weaker or newer player still has a chance, while the stronger player isn’t banging their head on the tables because their cards don’t interact in a meaningful way.

I feel cards with cycling take us closer to a manageable amount of variance, while injecting more decisions into the game. Have you ever flooded out in a game of limited? If you’ve played more then a dozen games, the answer is probably yes. Well, what if you could cycle some percentage of your lands when they were dead draws? When do you want to start cycling lands? At 4 in play? 6 in play? These are the decisions that will separate the good player from the bad player and the exceptional player from the good player. Any time you’re given more decisions that can give a player an edge is a good place to be in a strategy game.

My only complaint about the cycling dual lands is that they are rare and not uncommon for limited purposes. As strange as it may sound, if you have a critical amount of 1-2 mana cycling cards in your deck , then they start to become a part of your mana base. In a typical 40 card limited deck, you want to run 16-17 lands, however with cycling in the format, if you have 7-9 cards with cycling, you can begin to cut lands, and run somewhere closer to 14-15 lands. What this lets you do, is only needing to hit 1-2 lands and then cycle your cards to hit lands number 3 and 4. Once you get to that point you can stop cycling your cards, and your deck has a high concentration of gas, you will not flood out due to your low land count, making your deck optimised for the late game. 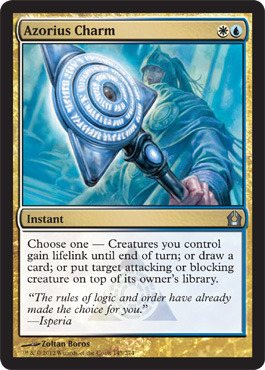 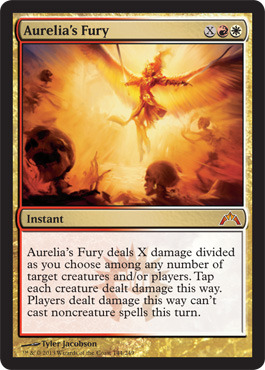 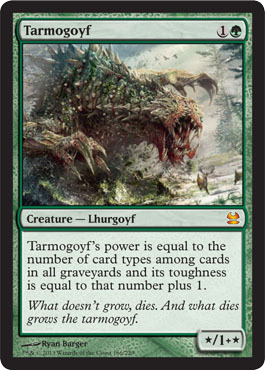 If your opponent has 17 lands in their deck and you have 14, and you can reach the mid game with 4 lands in play, you should be advantaged. Another thing cycling does, is it raises the floor of a card. A lot of the times when people see a card, all that they evaluate is the ceiling of the card, or what the best thing this card can do is. While this is great to think about, it’s not the best way to evaluate a card. Looking at the floor of a card is much more important, or how good is this card in a worst case scenario. Look at a card like Azorius charm. This card was a staple when it was legal in standard, and the reason for that was that it effectively had cycling attached to it. The other modes were very average, but because it could be cycled when you didn’t need the other effects, it was a power house.

When evaluating a card with cycling, keep in mind that a very under powered or average effect that has a good cycling cost is much more powerful then it may appear. After considering this, a card that I am very excited about is cast out. It is basically the definition of perfect removal spell. In the early turns it can be cycled to hit land drops, and in the mid game it can answer anything at instant speed. (it even dodges inquisition of kozilek, abrupt decay and can grow your tarmogoyfs for you modern abzan players out there.) I could talk about how great cycling is for game play forever, so lets just move on to the next mechanic! 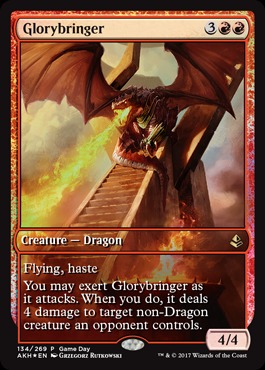 Exert: This mechanic I am not as excited about, but lets still go over what type of decks and game play would want to use these cards! This mechanic basically locks down your own creatures for an added effect. Which basically means it’s best used when you are ending the game on that turn, or you need to use the ability to get past a bigger blocker and there is no other way. This mechanic plays best in an aggro deck that’s looking to tempo out the opponent or end the game before the opponent can dispense their resources. I do feel that this mechanic has some good flavor (perhaps not Egyptian flavour, but general flavor) in the fact that if someone was attacking and they over exerted they would be expended for the next little while or tapped out. So good job on that level Wizards. 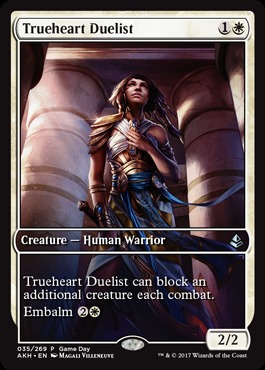 Embalm: Round two anyone? Basically flash back for creatures. This could get interesting in older formats with dredgers or ways to put cards into your graveyard to get extra value. We will have to watch for cards with this mechanic that have been pushed for constructed play.

Aftermath: the new, slightly more complex flashback for spells? The problem with flashback from a game play standpoint is it’s tad bit redundant getting the exact same effect twice, so I am glad that they’ve upped the complexity to give us two different effects depending on where we’re casting this card from. However that being said, the fact that embalm is effectively the old school flash back for spells, and its on a different level of complexity in the same set is a little bit odd to me. However, it shouldn’t be that big of a deal, lets roll with it!

My favourite recent draft format was 3x khans of tarkir. The reason for this was great mana, and great mana sinks with all of the morph creatures. I feel like this draft format should shape up to be another great one, with cycling, and lots of mana sinks in the embalm and aftermath cards. Until next time, see you at the Amonket draft tables