Welcome to Jester’s ReCap, the series where I go over the latest MTG news from the top of my head without any research or reading or anything that counts as work. This week is pretty much all Unstable, and I have to tell you: that’s awesome. Unstable is something I’ve been looking forward to for a long time and now that spoiler season is in full swing, it’s time to just bask in the crazy. The silly. The bizarre. The Doom. The Squirrels. I’m going to wax poetic a bit about something that I genuinely like for the majority of this article, which is always a breath of fresh air. Normally I’m all bitching and moaning, but this week there’s just a sliver of that upfront. 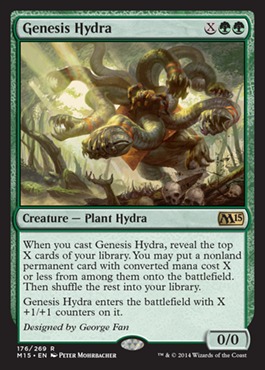 Look, we’ve covered MTGO sucking in the broadest possible terms. You know it sucks, I know it sucks. I’m constantly telling you it sucks. It’s broken and ugly and irreparable in the way only dated computer software can be. But let’s set that aside this week and drill down on a tiny portion of it. Let’s get very specific. How is it possible that Genesis Hydra is still broken? For those of you unaware, Genesis Hydra is an M15 rare which has never worked on MTGO. It’s supposed to give you a neutered Genesis Wave impression wherein the number of counters placed on the hydra is how many cards you can drill down to grab a non-land permanent and put it on the battlefield. It does not do this. It currently plays like a more expensive Slime Molding. Presumably, every single day some new player crams Genesis Hydra into some casual commander deck and is rewarded with a swift punch to the throat as it turns out they actually played a bad Ivy Elemental. This is despite the fact that—in addition to being released in M15—it also spent some time in the Legacy Cube (removed in 2016) and is currently up for reprinting in Iconic Masters. This isn’t rocket science, WOTC. This isn’t even game design. It’s not like this is some massive balance issue, or delicate PR problem. This isn’t your cards rolling themselves into cardboard croissants whenever they’re exposed to oxygen or heat. This is the easy part. Don’t put bugged cards in your cube! If you’re going to reprint a card in a set, maybe make sure it works when online players want to use it. I know it seems like a tiny thing, that this one card has been bugged for 2 years and yet keeps getting treated like a functional tool in your toolbox. But it’s really indicative of a larger problem with the WOTC Digital Team which is that the left hand never seems to know who the right hand is clumsily groping like a drunken frat boy.

Alright, there’s my weekly purging of negativity. Ahhhhh. I’m ready to be positive now. For the record, there are about a hundred million reasons I think Unstable is great and I can’t possibly compete with the popularity of the spoilers anyway, so here are a few of the reasons I’m excited for our latest silver-bordered bounty. Magic is always fun. Deckbuilding and brewing are fun. Competition is fun. Winning is fun. Improving your own play and achieving new personal bests is fun. But magic is also huge and complex. Competition is stiff, and self-improvement is often a slow, laborious process. In my case, it’s a Sisyphean task since “getting better at stuff” is a skill I’ve never quite mastered.  And even when you’re not grinding out for the pro tour, Magic can often start to feel like work. Learning the meta, memorizing lists of combat tricks and evaluating cards for their competitive edge are all tasks with a certain amount of charm, but sometimes it really feels like somebody drew beautiful fantasy art all over my TPS reports and Purchase Orders. “Un-” sets remind us that the stakes have never been lower. That we’re here to have a good time, to make an enormous amount of puns and to fling robot-squirrels at our opponents’ faces.  Sets like this remind us why we started playing Magic. Oh, also for all the time I invest in this game I am tremendously bad at it. So I love it when the competitive stuff cools off and we can all just chill. It’s like inviting the Cleveland Browns to play Connect Four.  Sure they’d probably lose at that too, but at least they don’t have to care. 2. It Speaks Our Language

More than callbacks, memes or references, Unstable is an opportunity for WOTC to show they’re paying attention to our community. Yes, Crow Storm is hilarious.  Yes, Last Strike is probably something that showed up in a fan-made Magic set at some point. Squirrels have as much to do with Maro’s love of them as our rabid passion for the furry little bastards. Overall though, Unstable cards are all just a few hundred inside jokes. They show that although a need for balance and relatively professional design often get in the way, the folks at WOTC are really just like us, and they aren’t simply locked in some terrible corporate bubble. Sort of like when Modern Masters 2017 was just a laundry list of every reprint we’d been begging for, it’s nice when WOTC can show they are genuinely paying attention. And keep in mind, this is not a community they “manage” or that they built. It is very much one they observe and communicate with at a distance. The more cynically minded of you might point out that the MTG community went to all the trouble of building a Shibboleth just to hand it over to our corporate overlords, but you know what? We still built a damn community and we still have our own proto-culture and it’s still damn impressive.

Have you seen the new tokens and lands?! The Just Art tokens are goddamn amazing.  It’s a small thing, but it’s a smart thing and that’s great. If there’s a joke here it’s that these things will probably be forty goddamn dollars at some point in the future and could literally be replaced with stick figure drawings on a napkin which would be just as legal.

This is a real test. Silver-bordered sets didn’t do so well last time, and there’s a lot of skepticism on whether WOTC can get the community excited enough to draft an Un-set more than once or twice. The trouble with jokes is they get less funny the more you hear them. WOTC has returned to take another crack at this, and I love they have. It shows a willingness to make mistakes and take chances.  It also gives players in the community a chance to reward WOTC when they listen to us. Which naturally means it will tank immediately. Because if there’s anything I’ve learned about the Magic Community, it’s that we absolutely should not be in charge of our own destiny. We should be in charge of meme-production, wild secondary market speculation, bitching, and fan fiction. Leave the actual decisions to corporate sharks who hate us but love our money, or dedicated designers who love the game but hate us. Basically, to anyone who hates us.

That’s it for me this week, enjoy Unstable Spoiler Season guys!