Double Masters went through major changes over the course of its development, but nothing quite as major as the changes to its marketing campaign. The initial plan was extremely ambitious, and due to changes to the set and timeline, it never saw the light of day.

Double Masters was originally pitched as “Cornucopia,” an extra-large booster pack with reprints from a wide variety of sets, up to and including Ikoria. The card list was apparently quite different from the artifact-focused set they ended up releasing, and included support for dozens of several odd archetypes, including blue/green tempo and combos inspired by popular Pauper decks. In fact, the artifact set was initially going to be an entirety different product that was being developed alongside Double Masters, known at the time as “Artifact Masters.” Due to a number of factors, these projects were eventually combined into the product we see today.

“The idea was to create a full-length musical based on the set.” 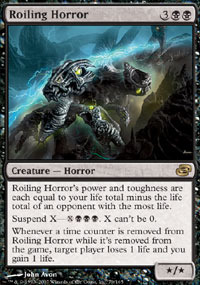 Wizards of the Coast wanted Double Masters to stand out, and asked their marketing department to come up with something bold and unique to promote the set. Inspired in part by the recent success of the War of the Spark trailer, as well as growing interest in broadway productions like Hamilton, the head of Wizards’ marketing proposed an add campaign that would be entertaining on its own. The idea was to create a full-length musical based on the new set, and release it in installments over the course of the preview season. Each song would be in its own ad, and when the set came out, the entire production would be available to watch online.

It would be a large undertaking, but despite some hesitation, the ad campaign was green-lit. Excited by the idea, the marketing department began work on the musical the very next day. Taking what they learned from their attempts years prior to make a soundtrack for the Invasion block, as well as their recent work on “Beauty and the Beast Token,” the marketing department was confident that they could make the “Roiling Horror Picture Show” a success.

“It looked like they would have to rebuild the entire set from the ground up.” 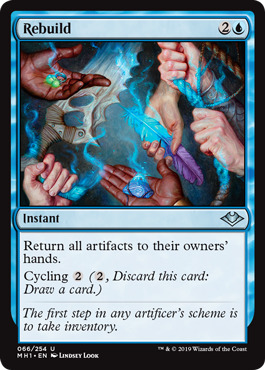 A few months into the design for Double Masters, things weren’t going as well as anyone had hoped. Playtesting showed that trying to support so many different archetypes wasn’t working, and it looked like they would have to rebuild the entire set from the ground up. To make matters worse, the deadline for the set was bumped up nearly three full months to fill a gap in the release schedule. This left R&D in a bind. Fixing the problems with the set in time for the new release date would be next to impossible. The entire project might have to be scrapped.

Thankfully for R&D, the team working on Artifact Masters was having more success. Mechanically, their set was working, though it was much further behind in development. The tough decision was made to pool resources and combine both Masters projects into one so it could be released on time. The successful elements from the old Double Masters design were incorporated into the new project, including the extra rare slot in each pack. This required some adapting, but they were able to get it done without too many changes to the Artifact Masters card file. The combined effort of these two teams paid off, and they were able to get the set ready in time for it to go to the printers. Unfortunately, the same could not be said for the ambitious Double Masters ad campaign.

“The team struggled to adapt their musical numbers to the new artifact theme.”

Everything about the Roiling Horror Picture Show revolved around the original set design of Double Masters, but now that the set was completely different, nothing fit. The team struggled to adapt their musical numbers to the new artifact theme, but it didn’t take long to determine that it couldn’t be done in time for the new deadline. The new Double Masters set would have a more traditional ad campaign instead.

Only one song from the proposed musical was ever fully completed: the opening number entitled “Special Product/Double Masters.” Rolling Stoneforge Magazine was lucky enough to get a look at the original lyrics:

Mountain Yeti was swell
Against your old white spells,
But he still died by your Hand.

And Flash let you cast Wurms
At the end of your turn.
Enchantments untapped all of your lands.

I tried to Go On,
But you just cast Swan Song,
So I used my Contingency Plan.

It was an About Face
And a Slip Through Space:
My Nomads threw away my hand!

I knew I was in Peril, with that Myr in battle
And an Engineer looking for thrills.
And I really got caught when I saw you snap block
with an instant that gives poison and kills.
Now drafting this proves we need some new rules
‘Cause passing rares makes you feel screwed.
But when jank come by, in one pack side by side
I’m gonna build you some terrible brews
With the…

These lyrics reveal a lot of little details about the plans for Double Masters, before the project was overhauled. With references to powerful cards like Flash, recent mechanics like mutate, and familiar archetypes like Wilderness Reclamation and Pauper Tireless Tribe, the limited format for this set would have been absolutely wild. It’s perhaps unsurprising that R&D had so much trouble making it work. From the sounds of it, the original plan for the set was almost as big as its ad campaign.

What’s particularly interesting is the reference in these lyrics to the new Draft rules. This suggests that first-picking two cards out of each pack instead of one was something the designers were considering from very early on. We know several elements of the original design survived the transition to its inevitable artifact theme, and it looks like this must have been one of them.

“He tempts the casual players to draft for the first time.” 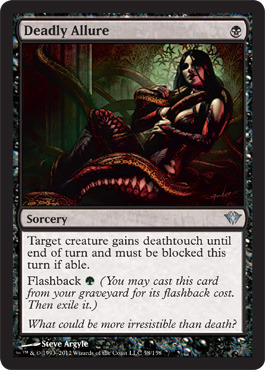 The marketing department of Wizards of the Coast did manage to put together a plot summary for the Roiling Horror Picture Show before the ad campaign was cancelled, and while notes suggest it was never finalized, it still gives a rough idea of what fans could expect:

The story follows two casual Magic players, Brad and Janet, who get stranded in the middle of nowhere. While trying to find a place with cell reception, they come across old game store. There they meet the eccentric shopkeeper, Frank-N-Furter, who tempts the casual Magic players to draft for the first time. After finally giving in and trying a Limited format, their outlook on the game, and life, radically changes.

The plot summary also featured titles of several other songs they had planned, including:

Work on the musical ended before these songs could be completed, so they never got lyrics. Nevertheless, between the lyrics to Special Product/Double Masters, the other song titles and the rough plot summary, we can reasonably infer that Frank-N-Furter was meant to be a Phyrexian, and that he would have returned to his home plane at the end of the production. It’s worth noting that this incorporation of Phyrexians seemed to have bled through into other projects that were being developed at the same time, like Jump/Start. Frank-N-Furter’s tragic end might have even been the direct inspiration for the new Phyrexian Swamp! 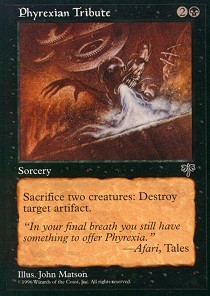 It’s hard to say how well the Roiling Horror Picture Show would have gone over with the Magic community, or what kind of set Double Masters would have been if R&D had more time to work on the original card file. Would players have been ready for a glam rock musical about drafting Magic cards, or would this whole idea have gone down as a spectacular failure? We’ll likely never know, but it sure makes for a good story.

*This article is a work of fiction, and is intended for entertainment only. Apologies to Wizards of the Coast and 20th Century Fox. I hope you like the new lyrics.

For a far more accurate (and honest) account of how Double Masters came to be, I recommend Mark Rosewater’s article, “Double Deal.”

If you’d prefer to read more fiction about Magic’s history of music, check out the Rant of Valakut playlist:
Track 1: The Sounds of the Sea
Track 2: The Invasion Sountrack
Track 3: Yisan Records Presents – Scoop
Track 4: Beauty and the Beast Token